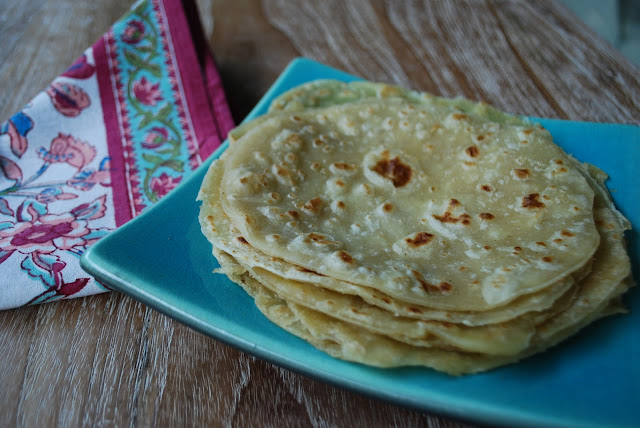 I mentioned earlier, that my Mum is visiting with us and that often means we’re treated to a variety of traditional Indian dishes, cooked in a manner I don’t (read: am not able to) prepare myself. We rescheduled our Meat Free day to Thursday, and the smells wafting out of the kitchen took me back to my childhood. Do you remember me mentioning my frustration with the green bean curry
in a previous Meat Free post? I don’t regret much, but I have come to regret all the years I spent complaining about and avoiding my Mother’s green bean curry. Rolled in a roti (my father still refers to this as “handmade bread”; as a child I thought this was so much more sophisticated than ‘roti’!) fresh from the pan, with vegetable achar and sambals or grated carrot, what a delight! A simple lunch-time meal, that is probably still enjoyed in many Indian (and non) households across the planet.

We made a potato curry as well, to complete our mini thali, or assortment of dishes (usually vegetable) served with roti or naan.

I ventured into new territory, and while my Mum stepped out, I took it upon myself, armed with Zuleikha Mayat’s Indian Delights, to make my own roti. Let it be said that the last time I tried to make roti, was in my third year of University and I ended up with a rock-like UFO, not even fit to give away to the destitute and starving. I sincerely wish I was exaggerating. Unfortunately, I have witnesses, who are still around to tell the tale.
Depsite this rather extended hiatus, from the roti-making, I was determined to make a hand-made bread worthy of Mother’s green bean and potato curries.<

The end result surprised everyone, especially myself. Scroll down for results. 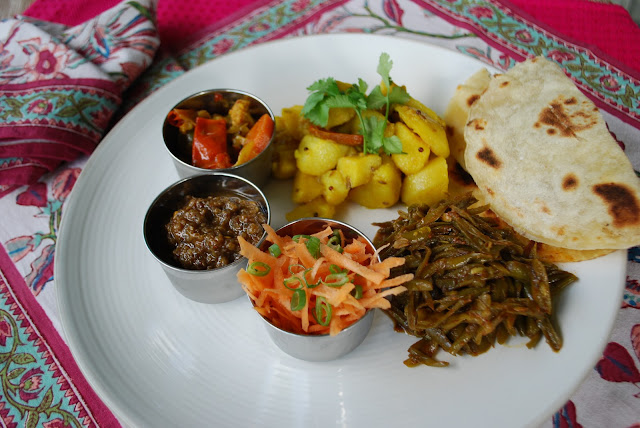 This unleavened bread, made of flour (or millet), and ghee (clarified butter) rolled very thin, is pan fried on a griddle or “thava” which is a heavy-based skillet. My Mum has had the same one since I was a tot and I have eyed it mercilessly and longingly ever since. However, it does weigh a ton. My own thava is a very light pan, but a skillet or griddle pan would work just fine and dandy.
When next I visit my parents in Kwa-Zulu Natal, I intend to take some time out to hunt down the perfect roti making vessel!

This recipe was adapted from Indian Delights, mentioned above.

far from perfect but delicious stack of rotis. Photo property of foodandthefabulous.com

pinch salt
160 g or approximately 1/3 block butter (I know, I freaked out! But just got into it. It makes ALL the difference)

Add semolina/mielie meal into a large bowl. Add milk. Indian Delights asks that you use, what they refer to as the “malaai” or cream that forms on top of the boiled milk, as it improves the texture. I did what they said, even with my 2 % milk. I’d like to think it helped.

Add melted butter, salt and the hot water. I’d say just add 1/2 of the water now. And then dribble it in when you add the flour, to achieve a dough of the perfect consistency. These may be time honoured recipes, but I know that even my Mum has had flops, at times, using these golden oldies. 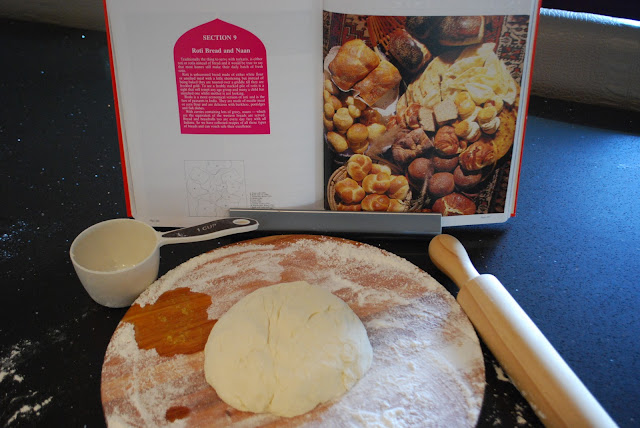 Add the flour, and dribble the water in as you knead. Knead well, on a well floured board (the flour is your best friend, all through, you will see) for 4-5 minutes. The dough you end up with will be soft, silky and warm.

Leave to rest for an hour, covering with a tea towel. The Aunties and Grannies usually have a special towel reserved for roti making!
Then, divide into 4 balls. In mean while, heat butter (all of it), in a small pot on the stove. 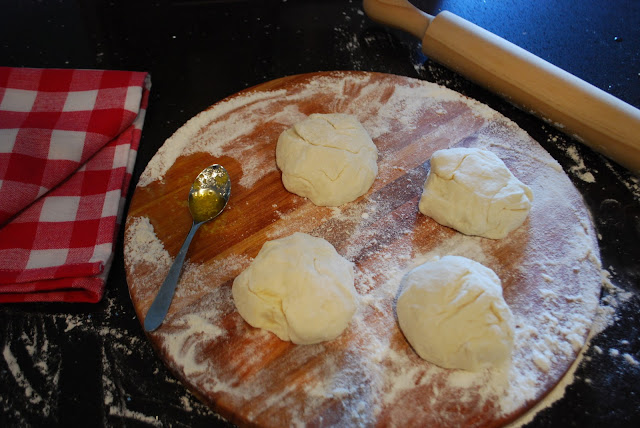 Roll one out, constantly re-flouring the board and the rolling pin as you work. Roll out, till you have a disk (I use this term loosely, of course!) of around 20-22 cm diameter. Now, no need to rush out for your old geometry compass. The dough should be fairly thin – 2 millimeters thick or so. Brush the roti with melted butter.
photo property of foodandthefabulous.com 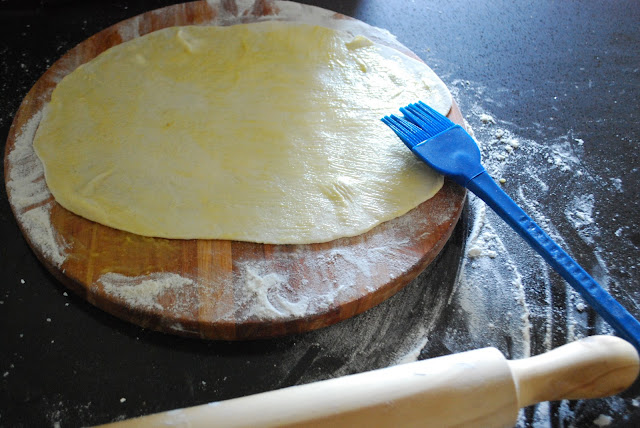 Cover the remaining three balls of dough with a tea towel, to prevent them from drying out

It is recommended that you fold the roti in half, quarters, eights and so a forth, brushing with butter as you go along your merry way. I put my foot down here. I wanted roti, after all. Not clogged arteries. But, do go ahead if like Nigella, you have no fear. It can only make the bread softer and more scrumptious.

Now, roll out again, flouring the board and rolling pin as you work. Your hands may ache, if you are not an expert baker, spring roll and pastry maker. Just hold on. You’re almost there.
2 millimeters or thinner is the goal. If, like both my grandmothers, you’re blessed that way, you will end up will a large, perfect disk.
I shall share a tip, picked up from my Mum (and a family shame, I believe. But she doesn’t know I’m writing about this, yet!).
I used a bowl, to cut out the roti rounds! Besides, I wanted a petite sized bread. Excuses? Who, me? 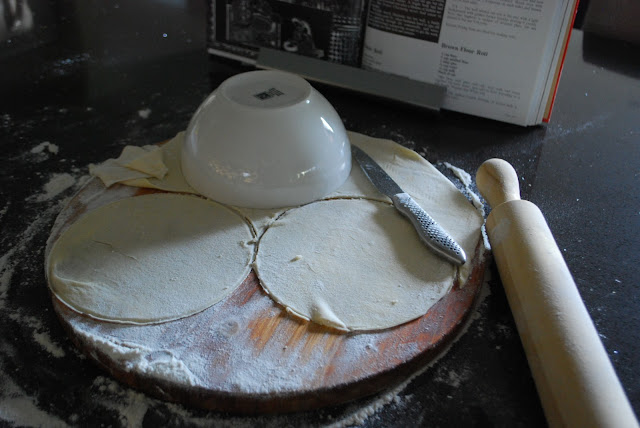 I’d say, despite the temptation otherwise, roll out all the rotis first (being careful to flour or add greaseproof paper between each roti as you stack) and then cook them. I mention this, because, cautious of the flour overload, I did not. And as a result, I had to re-roll a number of rotis. Labour of love, I kept repeating to myself.

Brush the hot thava with melted butter, and place a roti on. It will start to bubble slightly after a few seconds (look at the picture below). Turn.

A roti should be speckled brown (sometimes a dark brown dot. Ahem.). It will be crispy in places, but at the same time light and soft. 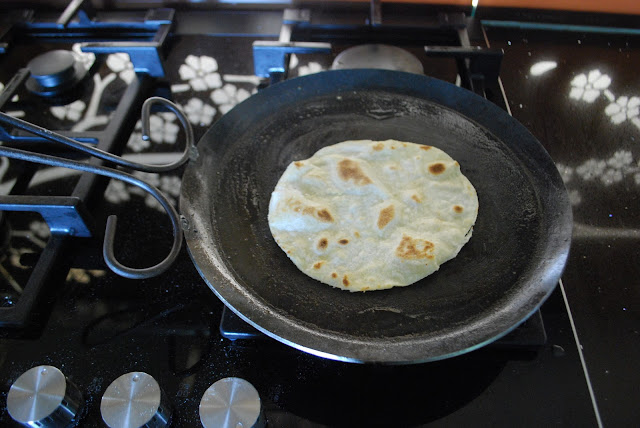 Cover with a tea towel as you stack the rotis on a plate.

Verdict?
My Mum asked me for my recipe! Ha. I’d say it was a triumph. I have no idea how the Aunties and Grannies make this in enormous quantities, on a daily basis. The recipe is quite simple though. I suppose my anxiety at having gotten it so wrong in the past, and my ineptitude with the rolling pin made me slower than I’d have liked to be.

Having said that, I will make this again. Every week, my husband demanded. We’ll see about that, I retorted.
As for the lip smacking green bean and potato curries, I can’t betray all of my Mum’s secrets now can I?
I will attempt my own version in the future, and if it’s any good, it will feature here.