this anniversary announcement is the property of foodandthefabulous.com

I was pleasantly surprised with dinner last week at The Roundhouse and having never eaten an evening meal there, I was quite excited. I believe that the host extracted from my husband that it was our anniversary. Now let me be clear, the man said “Yes” to the question “Are you celebrating an anniversary?” But it wasn’t just a normal anniversary, as you humans tend to celebrate.You know, the annual anniversary (if you remember?). I’m not sure if I should be embarrassed or smug to reveal that we do it on a monthly basis….you know, 2 years and say 3 months. You get the gist. So far, it’s worked out that in the month one has forgotten , the other remembers. Quite a handy system. ( In all honesty, I do not have hope that our luck will run much farther).

So on this particular day, we were celebrating an anniversary at the Roundhouse and despite not wanting to have it announced, we were reminded by every staff member from the car guard to the hostess, the Manager, the person who pulled out my chair (so chivalrous), and our waiter. My ears burned fire and my husband’s face coloured. Profusely.

The staff at the Roundhouse are awfully nice. Friendly, courteous, eager to help. I made a mental note to tip extra, even before the meal.

The Food
The menu of the night was presented as a choice of a 4 or 5 course a la carte or tasting menu, with or without a wine pairing. Initailly we eyed the tasting menu, but it came with the Chef’s choice of veal sweetbreads, that neither of us were keen for, that night. In my husband’s case, on any night.
We opted for a four course meal and enjoyed a very good bottle of Rose with it.

Pre-starter
Bread baked on site and an attractive platter of tapas style appetisers of charcuterie (I can’t recall exactly what it was, but it was delicious), marinated olives, croquettes (with a crumb to rival some of the best we’ve had in Spain and Holland), a goat’s cheese pate and wafer-thin melba toasts, was presented as the pre-starter.
Already, we had doubts as to whether we’d get through the four main courses, but it was a good indication of the quality of things to come.

Starter
Patrons are encouraged to chose any of the courses, in any order. One can for example have a fish dish as first, second and third course. One could also choose all three desserts if it came to that! I chose the panga with grilled peppers, chorizo, mussels and Morgenster olive oil as a starter and my husband had the Jerusalem artichoke veloute with braised duck,bacon and prunes. The last time I ate Panga was the previous October in Zanzibar- so I was looking forward to it. The panga was moist and delicious. The volute was excellent (we sampled all of each other’s courses.) Sharing is caring, and all of that.

Second
I stuck with fish and opted for the angelfish with braised baby gem squash, peas and a smoked tomato vinaigrette. The fish portion was quite generous and while it was cooked well and moist enough, I found it a tad boring half way through. The peas, still in fresh pods, tasted more like mange tout. I’m no expert though. My husband had the Westcoast crayfish, cauliflower and Madagascan vanilla risotto. One would expect a sweetish taste imparted from the vanilla, but it wasn’t. To be honest, I did not get any hint of vanilla and neither did I see the distinctive black seeds flecked through the risotto. Perhaps the risotto was prepared with a whole pod, which was removed at the end? I thought it a pity. If you’re going for such a bold flavour combination, why not go all the way and infuse the vanilla seeds through the dish?

Third
Both my husband and I opted for the roasted free range Elgin poussin breast (and I wondered all evening what they do with the rest of the poor baby birds!) with sweetcorn puree and sherry vinegar jus. It was delicious. I’m glad that I had the foresight not to finish my meal, as there was a pre-dessert and post-dessert yet to come as well!

Pre-dessert
A frozen berry cheese cake with white chocolate mousse (at least I reckon it was), served in fat shot glasses. Sublime. At this stage, my husband was shifting around uncomfortably, as he had eaten the rest of my poussin course and was already mentally prepping for the finale. By finale, I am referring to the souffle, of course. 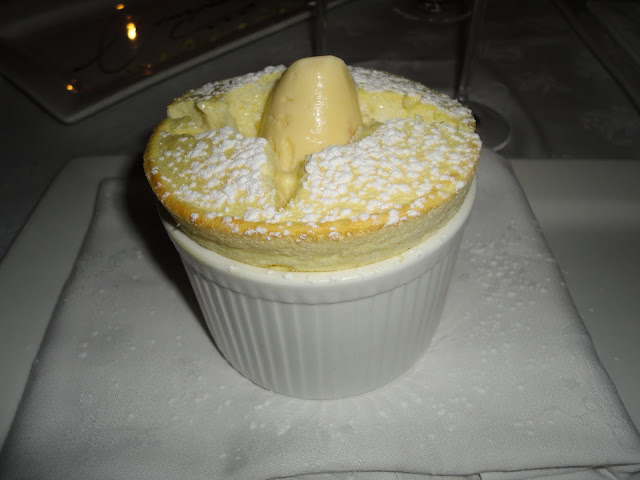 A passion fruit pouff of note. photo property of foodandthefabulous.com

In true twiddledee- twiddledum fashion, both of us opted for the signature dessert of the night, the passion fruit souffle served by a dramatic slicing of a cross into the centre of the souffle by a waiter, who then proceeds to spoon the perfect quenelle of coconut ice-cream into it.

“Perhaps a three course would have been a wiser choice?” my husband blurted out.
I have no idea who could get through a five course meal here, along with the complimentary extras that the Roundhouse serves. I’m not willing to put money on that though.
The souffle was perfect in its pouffiness but far too sweet for my liking. The coconut ice cream was glorious, complete with shavings of roasted coconut.
In honour of our anniversary, the Manager presented us with a mini felchin chocolate fondant, the word “Congratulations” skilfully emblazoned in chocolate across the plate. (Cue red ears and flushed face again, at this point!). The chocolate fondant, which is a cold dessert, not warm as one would expect of a fondant, was bitter-sweet, rich and more to my liking.

Post- dessert
Yes, there was one and, as merrily stuffed as we were, we sampled the platter as we entertained the thought of rolling out the door and getting into a flying vessel replete with pilot to charter us home, and carry us upstairs.

Verdict
The Roundhouse, with its sublime views (by day), excellent, gracious service (the staff make you feel welcome and are willing to assist at every turn), helpful sommelier who is well versed but not pushy, and the beautifully prepared food is the perfect choice for a special night out. Anniversary, or not.
Just be warned though, the Roundhouse is a very generous establishment, so do come hungry!
(We were reminded of Gramercy Tavern in New York, after our dinner at the Roundhouse and that, in our books, is one of the highest culinary and service compliments we could pay).
This kind of service and food warrants a return and I have my eye on a summer tapas lunch very soon.

*Note*
The opinions expressed above, and interpretation of the menu and ingredients presented, are mine alone. I apologise for inaccuracies, if any.

No offence to the establishment, chef or staff is intended.