Bunny Chow – What’s in a Name? 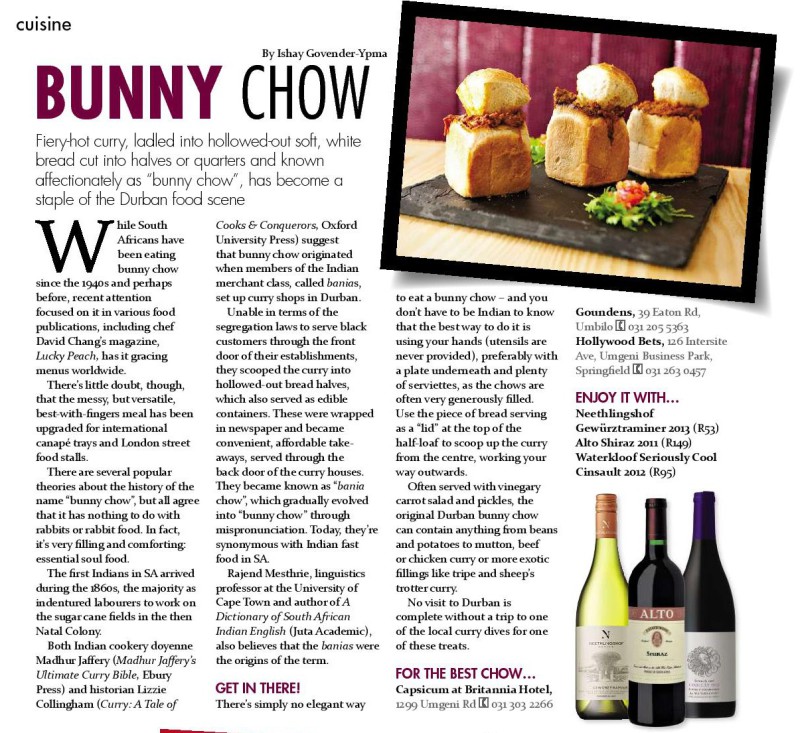 Fiery-hot curry, ladled into hollowed-out soft, white bread cut into halves or quarters and known affectionately as a ‘bunny chow’ has become a staple and mainstay of the Durban food scene. For SAA Sawubona magazine July 2014

While South Africans have been eating bunny chow since the 1940’s and perhaps before, recent attention focused on the fast food by various food publications, including chef David Chang’s food magazine, Lucky Peach last year, has it gracing menus worldwide.

There’s little doubt though, that the messy but versatile, best-with-fingers meal has gotten an upgrade for the international canapé tray and London street food stalls.

What’s in a name?

There are several popular theories about the history of the name ‘bunny chow’. All who know it understand it has nothing to do with rabbits or rabbit food – it’s usually large and very satisfying.

The first Indians in South Africa arrived during the 1860’s, the majority as indentured labourers to work on the sugar cane fields in the then Natal Colony.

Unable to serve black customers through the front door of their establishments under the divisive apartheid laws, curry was scoped out into bread, which served as edible containers, and wrapped in newspaper to make convenient takeaways. These meals were sold through the back door of curry houses and became known as bunny chow, a mispronunciation of Bania, and became synonymous with Indian fast food. Chow, naturally, being a slang word for food.

Linguistics professor at the University of Cape Town, Rajend Mesthrie, author of A Dictionary of South African Indian English, also believes that bunny chow evolved from a reference to the Bania shop owners who made them.

There is no elegant way to eat a bunny chow and locals, of Indian descent or not, know that the best way to eat one is with your hands (utensils are never provided).

Use the piece of bread placed at the top like a lid to eat the curry from the centre and work your way outwards. Often served with vinegary carrot salad and pickles, the original Durban bunny chow can contain anything from beans and potatoes to mutton curry or more exotic fillings like tripe and sheep trotter curry.

No visit to Durban is complete without a trip to one of the local curry dives to indulge in a bunny chow or two. Just don’t forget the extra serviettes!