Machu Picchu & the Sacred Valley of the Incas

Machu Picchu & the Sacred Valley of the Incas – An Easy Walk 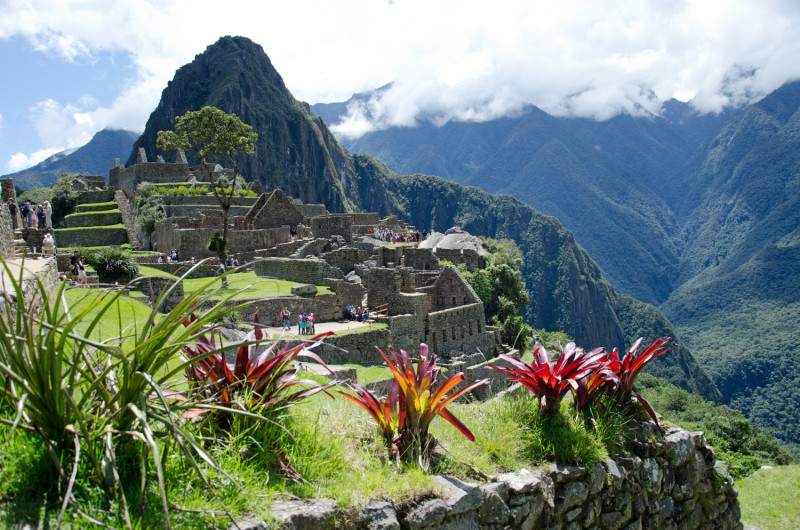 There is a lazy way for the less ambitious traveller to enjoy the architectural splendour of the industrious Peruvian Incas without breaking into too much of a sweat.

According to Grisel Gamarra Vasquez who has lived her entire life amongst the steep hills of Cusco in Peru, the Incas, her ancestors, could teach us a thing or two about community and hard work. Don’t steal, don’t lie and don’t be lazy are the founding tenets by which they lived. Hearing the phrases recited, the last one stabs at my heart just a tad. I arrive at that archeological wonder Machu Picchu, one I’ve dreamt about for years, and as magnificent as all the books say it is, the relatively lazy way – by plane, automobile and train.

For The National UAE

For the longest time I’ve hoped to visit Machu Picchu, kingdom of the ill-fated Incas, built in 1450. I know it would involve the discipline to get fit and mentally prepared for the gruelling four-day hike, and I am ready, eager even. When I discover, ambitions shattered, that the limited entry tickets I need are not available, I find there is a way to get to the mountain, with virtually no effort. I regale, to the nodding sympathy of friends that the decision is simply a practical one, and in no way pusillanimous. After a few emails with Vasquez and her tour company, I’m told that the arrangements have been made. I simply need to pay and pitch up in Cusco, located just less than 600 kilometers from capital city Lima, or a breezy hour and 15 minute flight. I bring along altitude sickness pills, just in case. 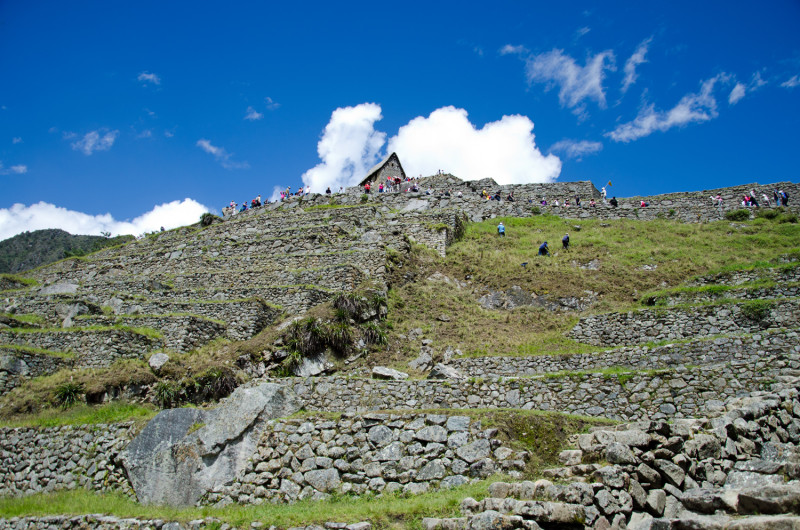 On day two, we pack our bags and leave historic, but tourist-trampled Cusco, which I keep as an altitude-acclimatisation base, a necessary move for all travellers. I mark the ascending paths of the Sacred Valley of the Incas, where we spend the bulk of our time, on my map. It spans a dense and scenic 60 kilometers from Pisac to the town of Ollantaytambo, the following morning’s starting point for the Machu Picchu day trip. After winding our way through the hairpin beds of this, the Urubamba Valley, once the heartland of the Incas, we step out of the car and Vasquez mentions that she fell in love with an American student when she worked as a stewardess on a train here. They were on the way to the ‘old mountain’, Quechuan for Machu Picchu when after some polite conversation, he asked for her email address. Beside the sprawling ruins in Pisac, scattered with the evidence of the Inca’s prowess, she tells me the story about Jeremy, her now-husband of seven years.

Pisac forms the precursor to my Machu Picchu exploration. Spending time here sets the tone for sights to come, and with less people to jostle with, Vasquez takes time to explain the Incan mindset around community, expansion and worship. “It’s hard to imagine they had this impact and ruled for only 100 years,” Vasquez says, pointing across the ruins, “As the empire expanded, they maintained the same language and social system, but they also took on many cultural aspects of the people they conquered.” 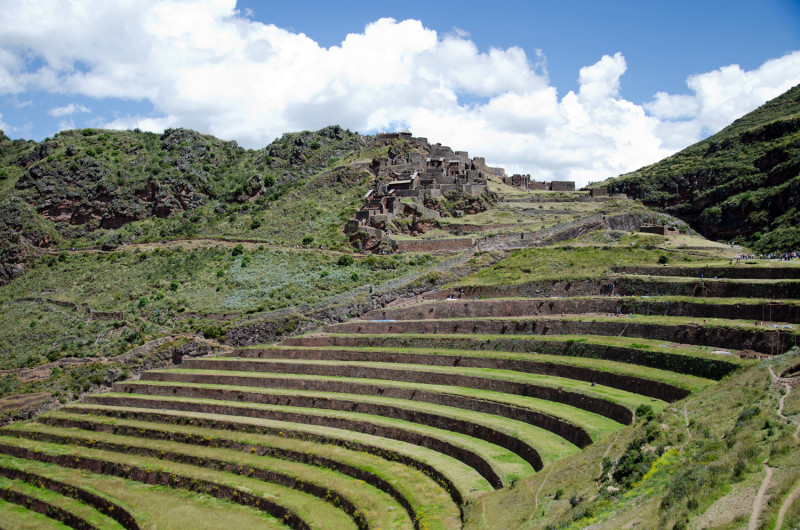 The deep terraced-bowl design of the ruins signifies agricultural experimentation, and the architecture is redolent of what we’ve come to expect of Incan sensibilities. The closer to the heavens a city was built, the closer to God the people felt. In visitors’ terms this means you need to be prepared for bracing climbs as you progress, as if in supplication across the carved cliffs.

We’re lunging upwards now and holding onto rocks along the mountain for support. As we catch our breath, we gaze down at the solid coils of the secret-hoarding temples of the moon and the sun (Inti, the sun god is a revered figure in worship rituals). The chakana, three-stepped crosses prevalent in all Inca temples, interlock seamlessly, representing the underworld, earth and the overworld.

“For the Incas, each world was as significant as the other. The snake, the puma and the condor were assigned to protecting each and you’ll find them in every ruin,“ Vasquez says.

All about us is the feeling of awe, mixed with curiosity. It could also be, I concede, the altitude obfuscating my thoughts – at one point we’re at a height of around 3400 meters. From somewhere, the stirring melody of a panpipe floats on the air – a busker trying to make a buck at an Inca ruin. We smile at the incongruity. 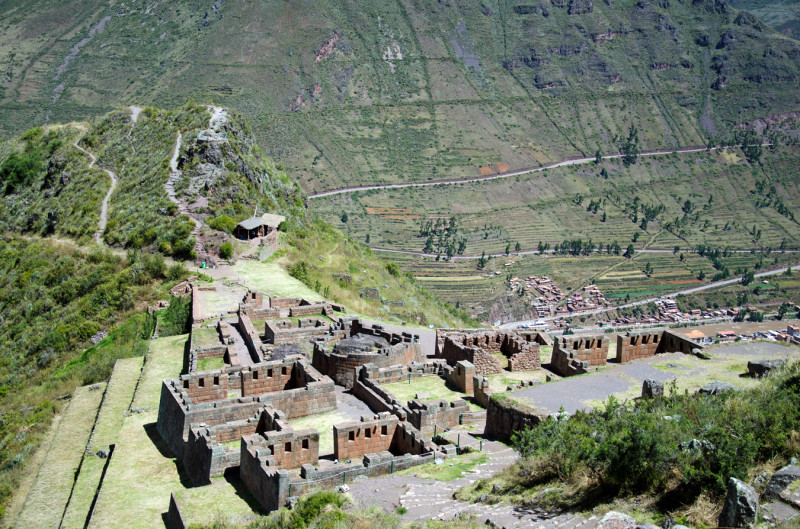 looking over the ruins in Pisac

I ask Vasquez the obvious questions: how did the Incas quarry and transport the behemoth stone foundations that make up the ruins, how did they bury the dead in rock tunnels across the gorge that could only be accessed by a flimsy swing-rope. Her responses are patient, but the mysteries remain unsolved.

As we hurriedly clamber out of the Pisac ruins, to get the last table at a somewhat dire lunch buffet nearby, my lungs and throat burn and my face starts to tingle. I take a moment to consider that had my application gone through, I would be on day three of the hike to Machu Picchu now, dirty, exhausted and somewhere past the snow-capped peaks of Sayacmarca. At the thought, my icy glass of chicha morada, the much-loved local purple corn drink tastes better than I’ve had to date.

By day’s end I have survived scrambling up two Inca ruins, including the post-lunch ascent of the one in Ollantaytambo, a “living” Inca town. It’s here that we spend the night in a lodge close to the train station, a convenient touch as we’ll need to rise at five the next morning for the journey to Machu Picchu. 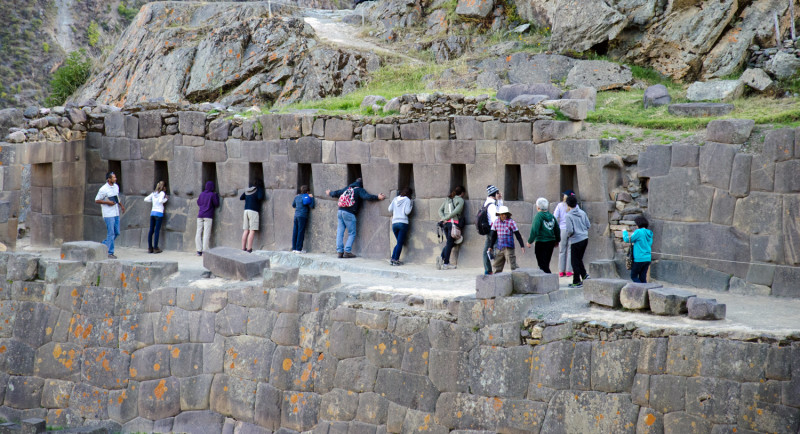 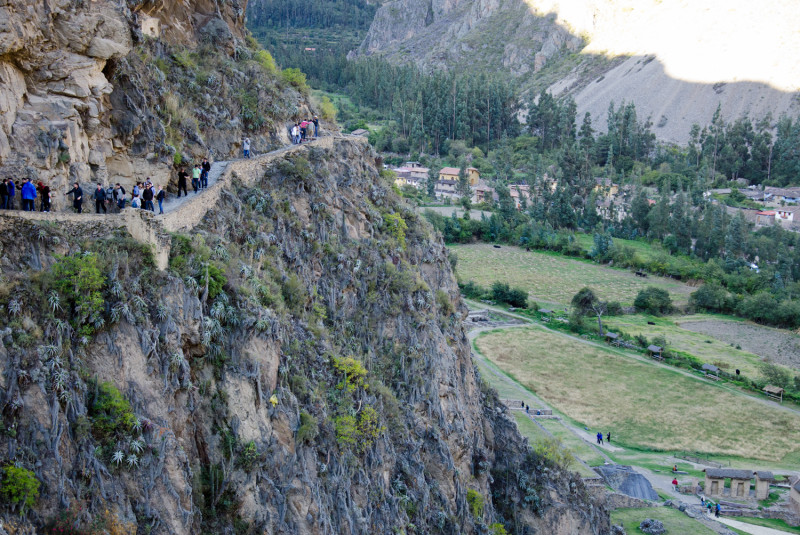 The temperature drops dramatically by evening and we tuck into bowls of thick soup, brimming with vegetables. “Eat good, nourishing foods,” Vasquez has drilled since I arrived in Cusco. “You’ll need to be strong for the big day.” I rule out a Pisco Sours and drift off to sleep.

Day three has arrived. I slip the last of the altitude sickness tablets into my pocket along with some coca leaf chocolate I picked up in Cusco. Coca leaves, while considered illegal outside the borders of South America, are revered by Peruvians.

“Even when they had nothing to eat, they had coca leaves, for energy, for pain,” Vasquez explains

The Ollantaytambo train station is a five-minute amble from the lodge. Close to the tracks, women with shiny black plaits under wide hats and colourful polleras (skirts) are selling bottles of water and hand embroidered backpacks. The PeruRail Vistadome train that I’ve picked for the journey, with its glass wraparound roof and windows, is crammed. A smiling hostess offers me a drink and for the next thirty minutes we traverse through a strikingly varied landscape. I glance around briefly to see if any star-struck American asks for her email address. But, it’s hard to remove my gaze from the windows, as the landscape undulates in variation. The ride is up in a flash. I alight at Aguas Calientes, a town Vasquez equates to Las Vegas (“It’s a terrible tourist trap,” she says, making me promise not to spend even a sole on a drink). We run to catch the bus and it darts up a steep zigzag path, hugging the untamed edges closely as other busses hurtle down to pick up more passengers.

Twenty minutes later, we are at the entrance of Machu Picchu, at 2430 meters altitude and spanning 13 square kilometers of rollicking Incan mystery, the majority of which scholars debate to this day. We climb up the terraced path, marching with determination (I’m a little familiar with this lay-out now) towards the restored caretaker’s hut. Stubborn llamas block the way as they munch on grass, indolently changing direction mid-nibble, and I take in the striking display of orchids. Few people mention the 300 species of orchids growing in abundance. 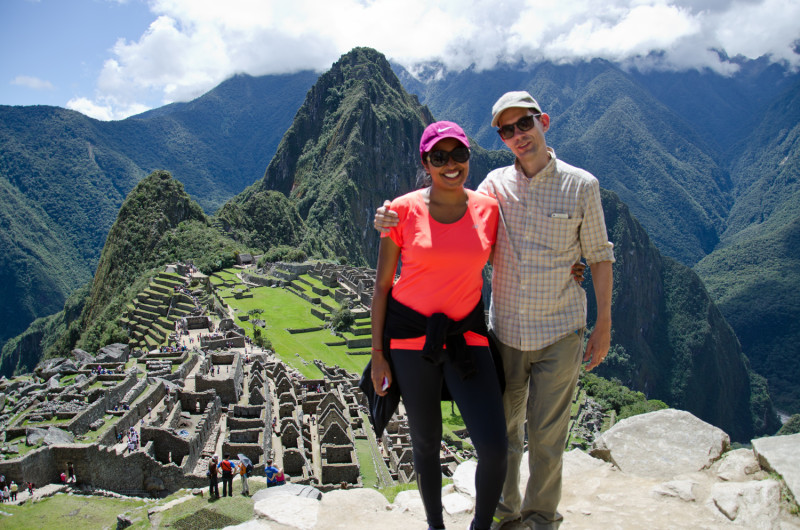 from the caretaker’s hut: Machu Picchu

Once at the hut Vasquez points out the Inti Punku, the sun gate that the hikers will walk through at sunrise on the final leg to the hallowed grounds. It is, by all accounts of my research, the highlight of the four-day trek for most. “And that,” she says, pointing behind me, ”is actually Machu Picchu, the old mountain”

“Now look ahead. What you see across the city is Wayna Picchu, the young mountain.” I say nothing in reply. Before me, sucking the breath and words from my tongue, is the image straight out of my childhood Encyclopedia Britannica, evidence of the great and powerful Pachacútec, the ninth and most famous of the Inca rulers, and the brilliance humans are sometimes capable of. The city unfolds beneath the clouds like a live postcard, people are ant-like caricatures, and the Machu Picchu theories and controversies around discovery, invasion, purpose and construction start to melt into insignificance. For a moment, anyhow. I don’t think there is much way to stem any tears that may flow, though dark sunglasses help. 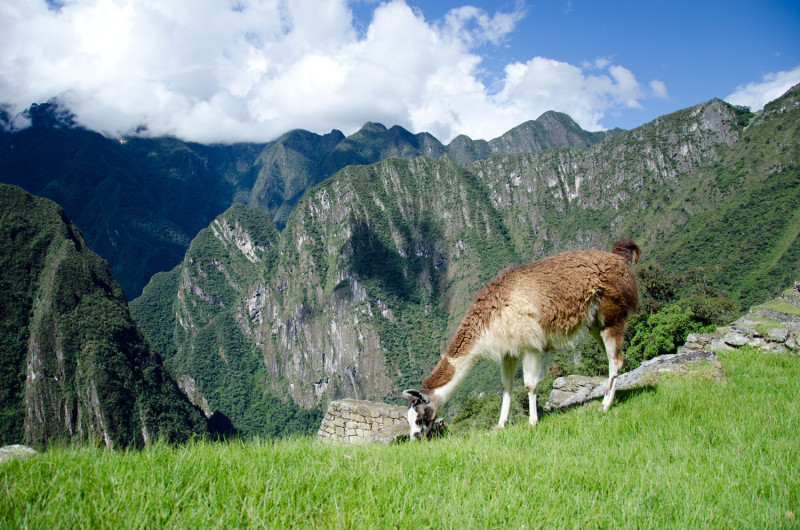 Vasquez reddens as she tells me that Peruvians, descendants of the Incas like herself, want to see the artifacts confiscated by Hiram Bingham, the American explorer and anthropologist credited with Machu Picchu’s discovery, returned to the land from whence it came.

After I have explored every nook and cranny of the city, I take the rickety bus back down to Aguas Calientes. Sitting on a bench, I open a bottle of water and a cheese sandwich from my backpack and look over at the imposing statue of a smiling Pachacútec. Everywhere are signs for “beers” and “massages”. It starts to drizzle and I wonder how the hikers’ legs have fared.

From Aquas Calientes, I catch the Vistadome train back to Ollantaytambo. The mood is light, with stewards performing a live show of traditional song and dance. That night, I sink into a satisfying slumber and have a rough time getting ready for the cab back to Cusco airport the next morning. And just like that, with me hardly breaking a sweat, Machu Picchu and the Sacred Valley of the Incas crawls back into the pages of my childhood Encyclopedia Britannica. 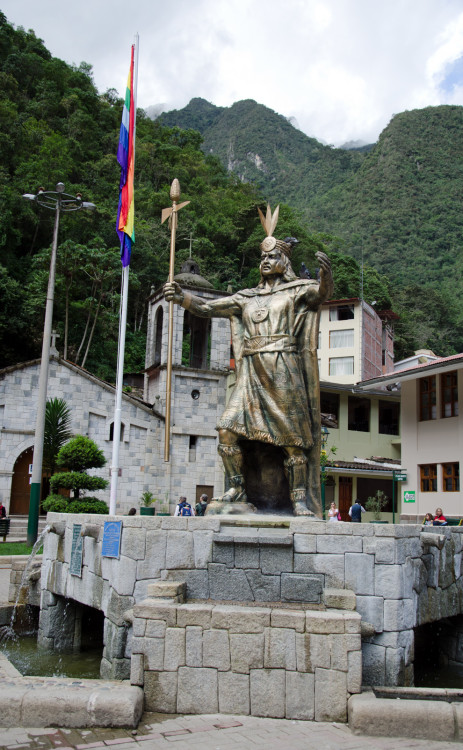 There are frequent daily flights from Lima to Cusco and back on a variety of local carriers. Book early for cheap tickets. 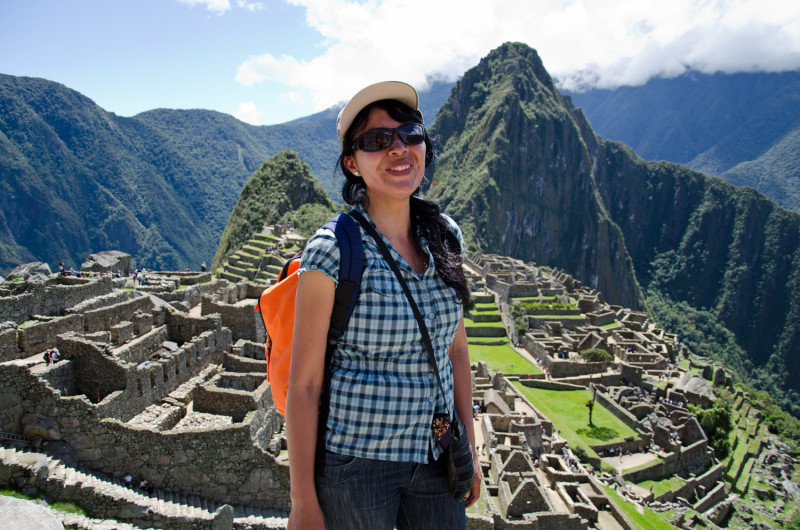