The ancient art of classical Bharatanatyam dance has undergone a revival. Ishay Govender-Ypma returns to her ancestral roots in Chennai, India to explore further. For Singapore Airlines Priority Club magazine. 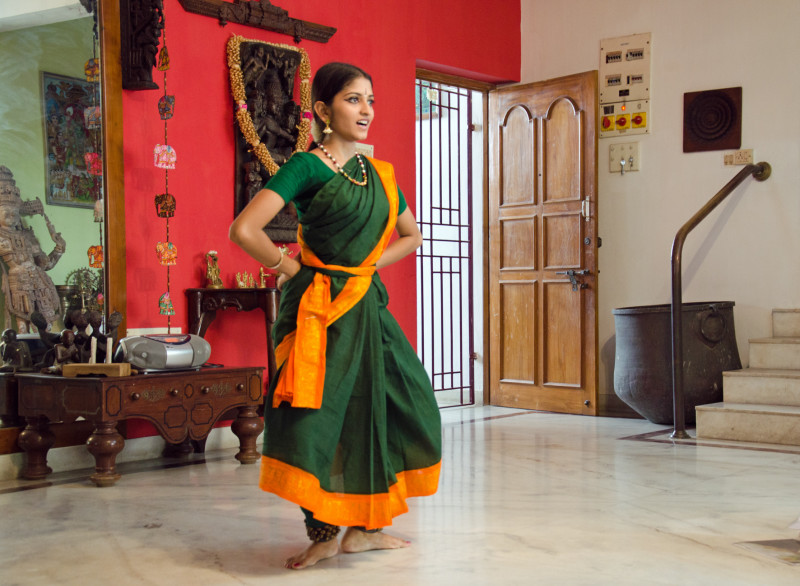 Her dark eyes are lined thickly in kohl, intimating the drama of a doe trapped in tragic light. She is holding her gaze heavenward – one beat, two, three, staring at her left hand in mayura, the ring finger and thumb touching lightly. Everything is still for a moment –mridangam drums, violin, the high-pitched crooning of the Carnatic songstress. I strain for the sound of breathing. Silence. And then, as a ripple of energy courses through her right hand, the bells on her ankles ring rapidly, rhythmically, freeing her body. Her golden waist-belt, weighty and exotic, glimmers, and her eyes dart to and fro in conversation. With whom, one wonders. A teacher, a god, a memory? She is smiling now, positioned in half-squat, transitioning into lunge, leaping with a feather-soft landing from side to side to the encouragement of drum and chanting singer. Fluid yet controlled, with a spine that remains in an elegant unyielding line, she smiles through the succession of adavus, the intricate steps and positions of Bharatanatyam, regarded the oldest classical dance form in India. As she mesmerises the crowd in the run-down community hall through nearly an hour of exquisite performance with no rest, she is yogi, praise-singer to the deities, a woman in absolute mastery of her art.

In Tamil Nadu state, the birthplace of Bharatanatyam, I revisit some of the traditions of my ancestors. As a child in Durban, a fifth generation Indian South African, I’d watch as my cousin practiced the dance form in my grandmother’s house. She patiently explained the movements that she learned in that week’s class, performing them to melodious Tamil words that were foreign to my ear. Tha Thai Thai Tha, she’d chant to my mother and aunts’ approval. As an eight-year-old obsessed with Bruce Lee films, I preferred karate lessons and our extra curricular worlds seemed wholly divergent. The entire production of pretty outfit, hair gathered in a tidy plait, jewellery and bells on the ankles seemed ornate and girly to me. Over the years, my interest in ballet and theatre drew me back to the classical dance form – mostly by the way of consuming Bharatanatyam YouTube videos online, because live performances are hard to come by in cites outside India. 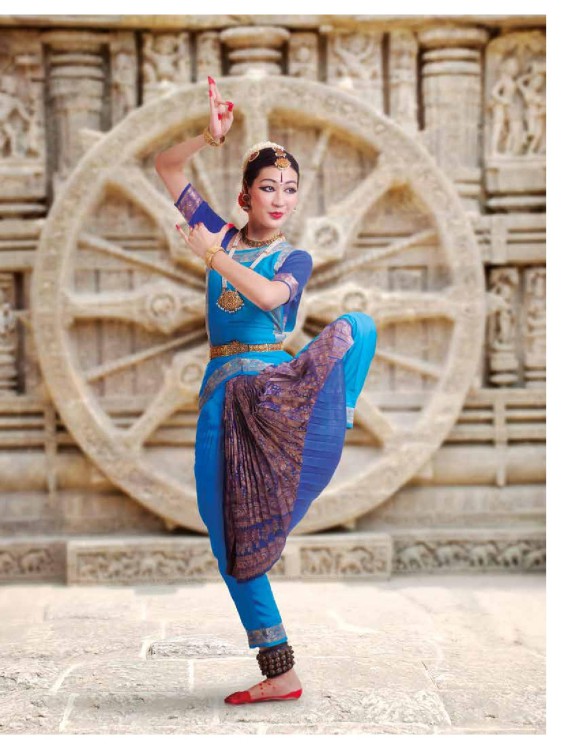 When the opportunity to watch a recital in Tamil Nadu’s capital city Chennai (formerly Madras) arises, I’m elated. To delve into basics of the dance, I attend a private class in a suburban home studio, recommended to me by the staff at The Leela Palace, a magnificent luxury hotel along the Adyar Creek. Akila Raman, a guide with Story Trails and avid classical dance fan explains the history she’s pieced together over the years, a mix of fact and fable, while a professional dancer, Sukanya Kumar enacts sequences and teaches one how to interpret the gestures and expressions. “Chennai boasts a discerning audience and a rich cultural history,” Raman says. 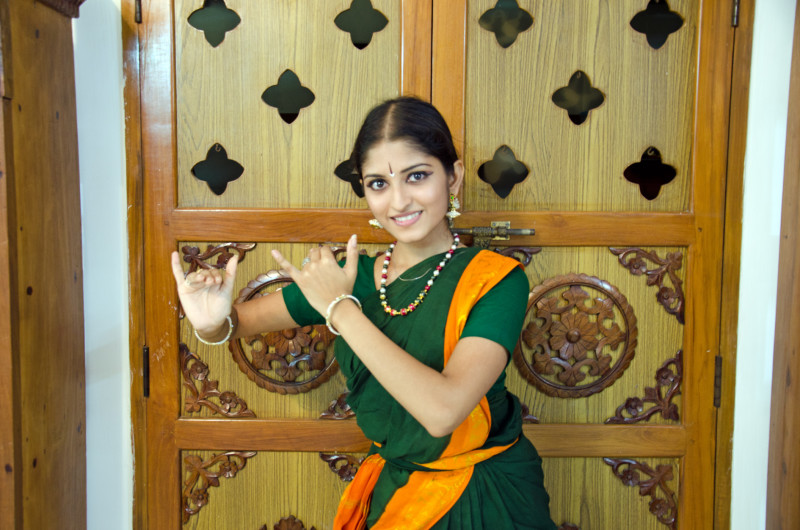 Kumar, kitted in an orange and green outfit comprising the traditional blouse, pants, fan and sash, is an accomplished and award-winning dancer. Born in Mumbai, with her ancestral roots in the village of Kadavasal in Tamil Nadu, she moved to Chennai at the age of 18 to pursue her first degree. Her education in the art of Bharatanatyam started at the age of four, and today at 23, with multiple degrees, she continues to study under the tutelage of a guru from the renowned Kalakshetra academy in the city. Her exposition of the building blocks and gentle instruction become the portal for most of the guests she hosts, into this world of ancient classical dance. Raman informs me that Bharatanatyam’s roots date back 5000 years, a dance to propitiate the gods and goddesses, evident in various Tamil Nadu temple sculptures. Performed by devadasis, or maidens of God dedicated to temple worship – educated, independent, virtuous women, it became a temple-art form sponsored and supported by the kings of India. When the British arrived, and landlords replaced the kings, the dancers were treated poorly and many fell into ill repute. “Both dancer and the dance became less godly and more worldly,” Raman explains. Under the influence of a Victorian sense of morality, the British abolished the performance of the dance and the legacy of the devadasi perished. It wasn’t until the 1930s, under the enlightenment of pioneer Rukmini Devi Arundale, and her husband George, both deeply involved in the theosophical movement in then-Madras that Bharatanatyam, though “sanitised” some say, underwent a revival. It was during this renaissance of Indian art and culture that the dance moved to the public stage for the first time. 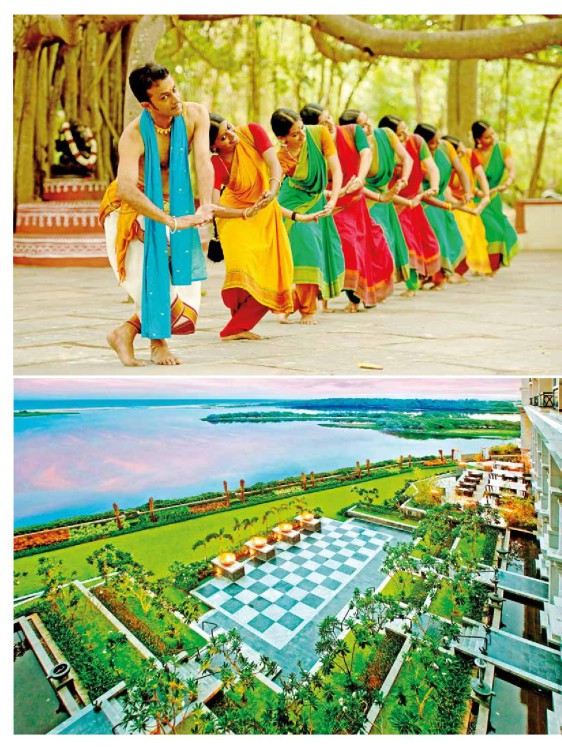 After Raman establishes a sense of context, Kumar dances out an energetic scene. With the frame of a child and noticeable almond-shaped eyes, I’m surprised at first by the intensity and power with which she kicks out her feet, spins and leaps. She invites me to participate, and I’m reminded of my cousin’s practice sessions at my grandmother’s house. We start with a primary adavu: we arrange our feet similarly to a plié in ballet and bend in a half sitting position. It’s far tougher than it appears when Kumar does it, and I wobble and wince. My palms are placed on my hips, facing backwards. I catch a glimpse of myself in the studio’s mirrored walls. The picture of grace, I am not. When a student starts out there are several elements constructed with the practice of a combination of movements – posture, stamina, rhythm, speed and agility. Ultimately, successful dancers must be in control of their bodies and their expressions. For many, there is an element of the unseen in play too – spirituality and a coexistence of reality and illusion, attachment and detachment, according to Kumar.

It’s the culmination of these aspects, and daily practice, for hours at a stretch, that leads to the ability of a dancer (male or female) to transport the audience into the depths of a story. There are rarely props or elaborate stages, even in contemporary performances – the dancer becomes the sun, the stream, mother and child, teacup and cooking pot, parallel to her own character. Bollywood and modern Indian styles also build on the classical form, Raman says, with many famous Bollywood dancers having first mastered the former. 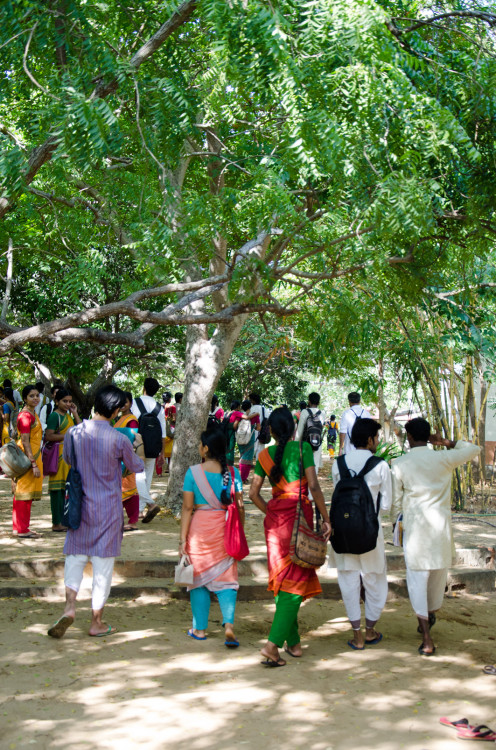 staudents after morning prayer at the school

Learning to interpret the various hand and eye gestures is immensely fulfilling, I find. The obvious from stirring a pot and drinking a sip of water, a bird in flight, the tickle of a butterfly, to the complex: remorse, falling in love, and extracting revenge. Once you grasp the gestures, it’s akin to unlocking the secret key to a puzzle.

And it’s no wonder that the first few rows in a dance hall are in such demand – all the better to observe the dancers’ faces. Apoorva Jayaraman, project coordinator at the Kalakshetra Foundation, guides me around the school and points out the prized floor space at the auditorium that audiences vie for, to sit cross-legged in the thrust of the action. December and January are the busiest months in the performance calendar in Chennai. Founded in 1936, the 100 dance students who enroll at the academy are schooled in a mulittide of disciplines including fine arts, history, philosophy and Rhukmini Devi’s passion: music. The cross-discplinary approach is evident in the life work of a number of prominent dancers of the previous generation such as Leela Samson, Chandralekha and Anita Ratnam, feminists defying traditional roles who took the art to the international stage and often worked tirelessly on issues of human and women’s rights. 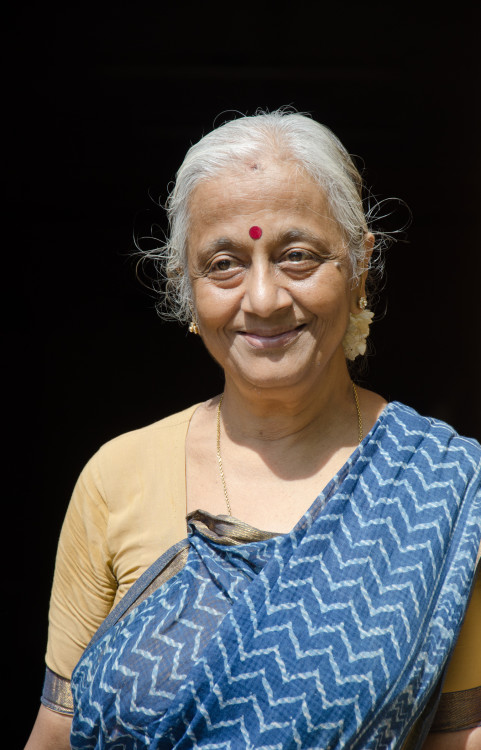 art teacher at the school. Students are schooled in various disciplines

At the school’s morning prayer service, I note a handful of foreign students sitting in the class as wisps of incense smoke curl around us. Devi, inspired by the legendary ballerina Ana Pavlova, whom she had met on one of her many travels abroad, had initailly learnt ballet, before delving into Bharatanatyam. The language of dance and music, though sometimes slow to transform, holds universal appeal, a link between past and present. As Impana Kulkarni, a twenty-year-old student at Kalakshetra says,”Bharatanatyam holds the ancient stories of our land, but I hope to carry my stories through it, a decade further.” 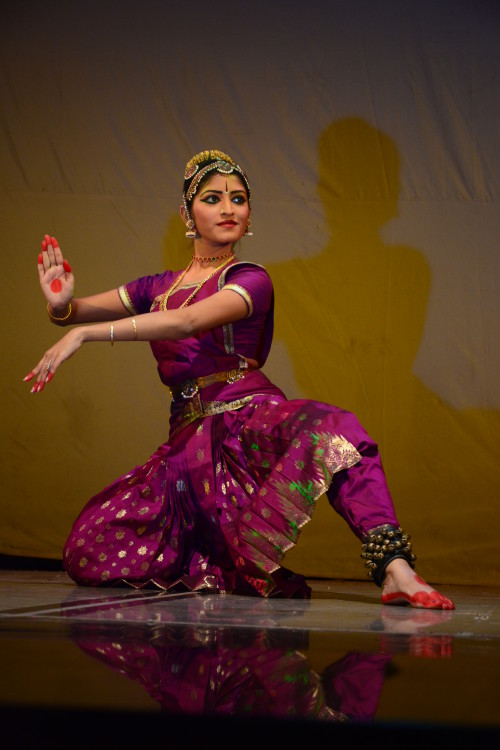 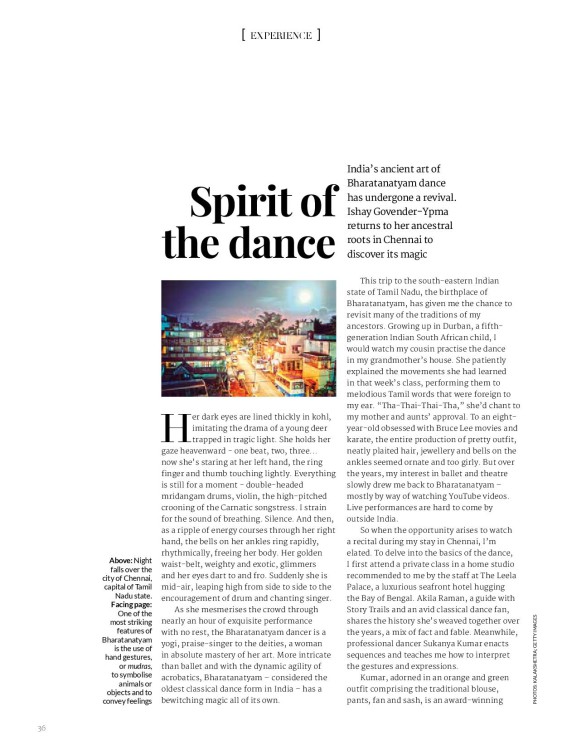 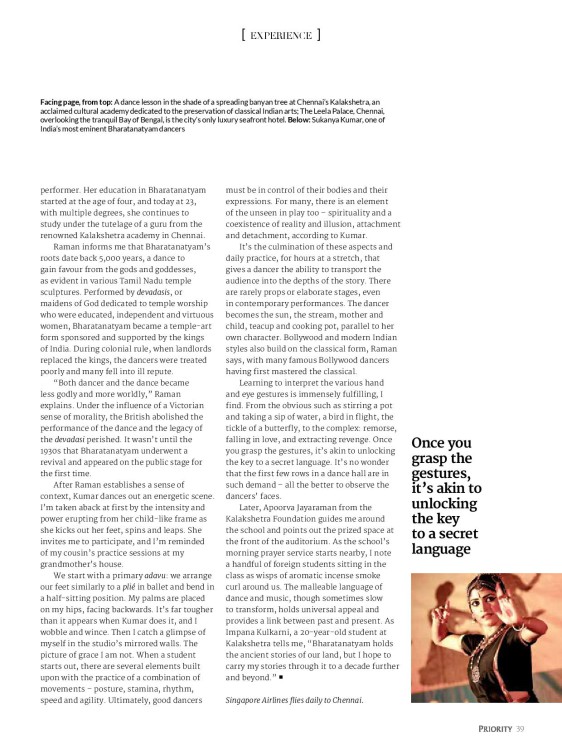