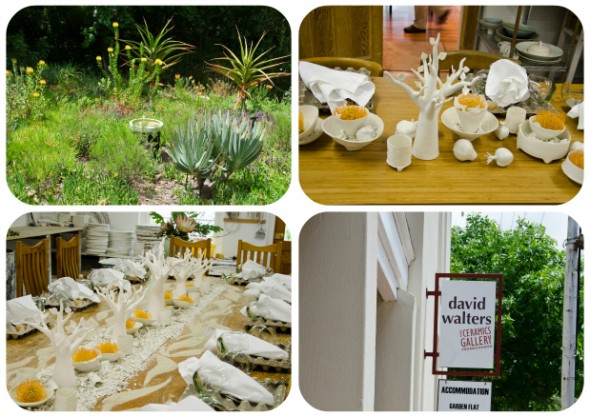 Franschhoek is celebrating its ceramists and potters during the month of October. Master potter David Walters, his wife Michelle and their daughter Sarah Walters, herself an esteemed potter, opened up their gallery this Sunday past, to host a gorgeous lunch for friends and a few bloggers and journalists.

“Respect the art and the artists while they are alive” was the impassioned message David shared as he related the story of the Chinese vase that sold for a ludicrously astronomical price, because it was not sufficiently appreciated during the 18th Century and made its way out of China to the West. £43 million, the price it fetched at the auction! Fitting that the carp on the vase symbolises plenty. 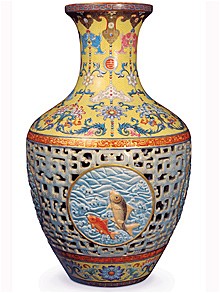 David’s work table, originally bought in Pietermaritzburg for a song and alive with the family’s history was wiped down and decked in many of the elements used in his pottery making, the pièce de résistance being the delicate, ethereal trees made by daughter Sarah. The table dresser, Leonard of Ebony had the guests oohing and ahhing all afternoon. (If you want to wow at your next party, contact Leonard- my FAB tip of the day. Tip two would be to buy a bunch of Sarah’s ceramic trees).

The lunch we enjoyed was prepared by the very charming (and highly in demand) chef Reuben Riffel, who spent some time discussing the menu and chatting with guests.

The starter consisted in four different canapes, each with a flavour kick- the most talked about being the baby spinach salad with parmesan, truffle, yuzu and langoustine oil. I’m so proud of my husband for detecting the yuzu- it truly is a once tasted, never forgotten flavour. Speaking of which, it’s time to visit Nobu again, I think.

Succulent duck leg served in a lovely complex citrus, soy and honey sauce was the main.

Dessert was a vanilla bean panna cotta with signature Reuben forest of fruits and fruit crisps. 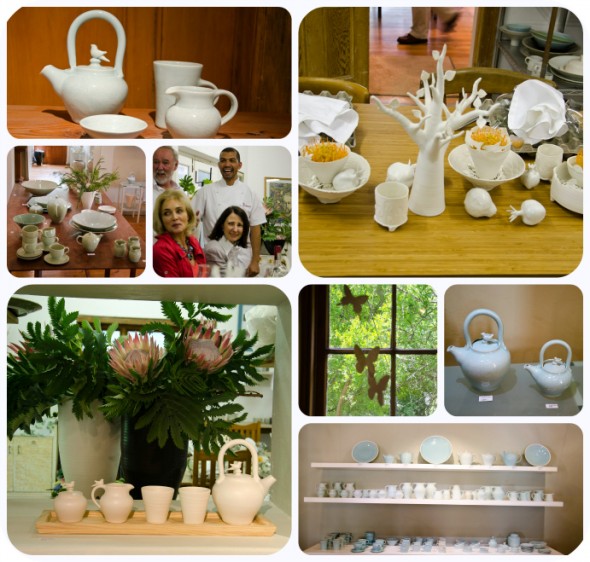 David makes made-to-order, bespoke dinnerware, bowls and vases. I could not resist buying a few of the more off-beat pieces, one of which I used in a food shoot this week. A wonderful surprise came in the form of one of Sarah’s gorgeous bird pendants on necklace that my husband tucked into a Diwali box of treats for me today. He must have seen me pick the pendant up on Sunday, and yes I did wonder how it would look on. I can now confirm, very, very lovely.

The Art in Clay festival continues until the 30th of October, please visit the Franschhoek tourist web site for more information on events, the bazaar and other pop up lunches.

*Lunch was sponsored by Robertsons Spices and wines by Boekenhoutskloof (Wolf Trap).*