Adventurer and videographer Graham Hughes is the only person to have travelled to every known country without taking a single flight. Ishay Govender –Ypma caught up with him via Skype from his home in Panama 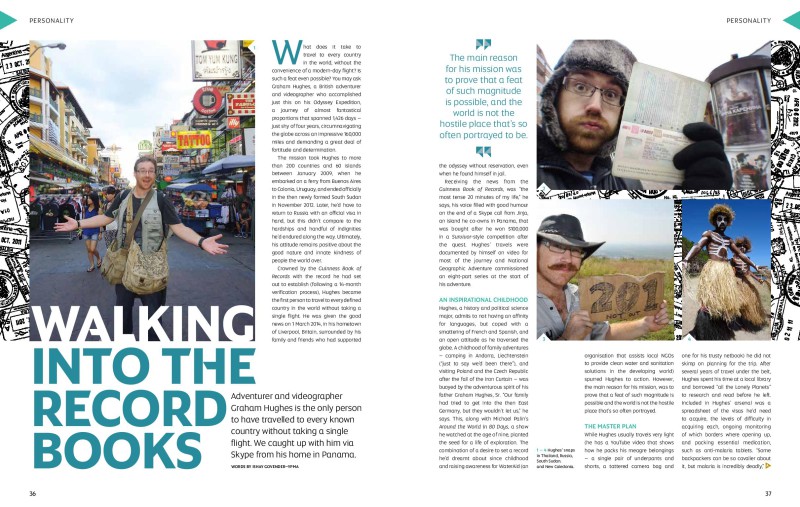 What does it take to travel to every country in the world, without the convenience of a modern-day flight?

Is such a feat possible, you may ask. Graham Hughes, a British adventurer and videographer accomplished just this on his Odyssey Expedition, a journey of almost fantastical proportions that spanned 1 426 days – just shy of four years, circumnavigating the globe across an impressive 160 000 miles and demanding a great deal of fortitude and determination. The mission took Hughes to more than 200 countries and 60 islands between January 2009 when he embarked on a ferry from Buenos Aires to Colonia, Uruguay and ended officially in the then newly-formed South Sudan in November 2012. Later, he’d have to return to Russia with an official visa in hand, but this didn’t compare to the hardships and handful of indignities he’d endured along the way. Ultimately, his attitude remains positive about the good nature and innate kindness of people the world over.

Crowned by the Guinness Book of Records with the record he had set to establish (but not before a lengthy 14-month verification process), Hughes became the first person to travel to every defined country in the world without taking a single flight. Hughes was given the good news on 1 March 2014, in his hometown of Liverpool, Britain, surrounded by his family and friends who had supported the odyssey without reservation, even when he found himself in African jails.

Receiving the news from the Guinness Book of Records, was “the most tense 20 minutes of my life,” he says, his voice filled with good humour on the end of a Skype call from Ginga, an island he co-owns in Panama, won in a survivor-style competition after the quest. Hughes’ travels were documented by himself on video for most of the journey; National Geographic Adventure commissioned an eight-part series at the start of his adventure.

Hughes, a history and political science major, admits to not having an affinity for languages, but coped with a smattering of French and Spanish, and an open attitude as he traversed the globe. A childhood of family adventures – camping in Andorra, Liechtenstein (“just to say we’d been there”), and visiting Poland and the Czech Republic after the fall of the Iron curtain, was buoyed by the adventurous spirit of his father Graham Hughes, Snr. “Our family had tried to get into the then East Germany, but they wouldn’t let us,” he says. This, along with Michael Palin’s Around the World in 80 Days, a show he watched at the age of nine, planted the seed for a life of exploration. The combination of a desire to set a record he’d dreamt about since childhood and raising awareness for WaterAid, an organisation that assists local NGOs to provide clean water and sanitation solutions in the developing world, spurred Hughes to action. The main reason for his mission, Hughes shares was to prove that a feat of this magnitude is possible and the world is not the hostile place often portrayed in the media. 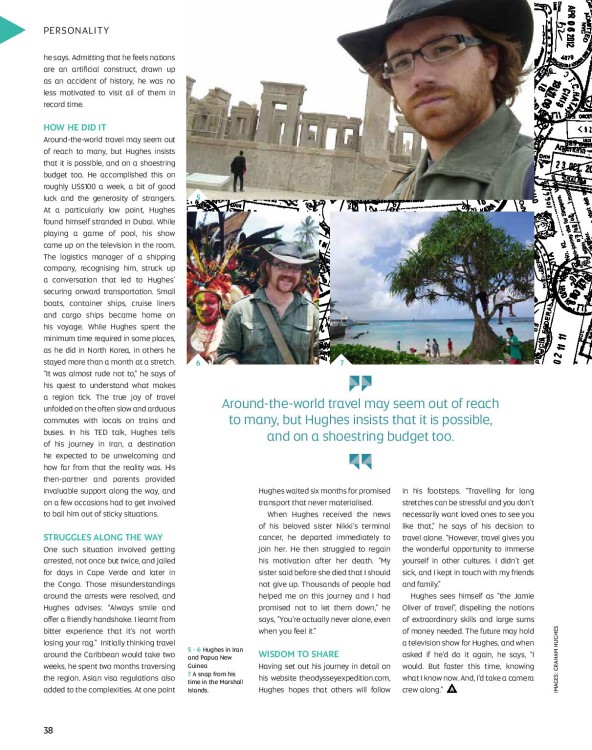 While Hughes usually travels very light – he has a YouTube video that sets out how he packs his meagre belongings that feature a single pair of pants and short pants, a tattered camera bag and one for his trusty netbook, he did not skimp on planning for the trip. After several years of travel under the belt, Hughes spent his time at a local library and borrowed “all the Lonely Planets” to research and read before be left. Included in Hughes’s arsenal was a spread sheet of the visas he’d need to acquire, the level of difficulties in acquiring them, on-going monitoring of which borders where opening up, and packing essential medications such as anti-malaria tablets (“Some backpackers can be so cavalier about it, but malaria is incredibly deadly,” he says). Admitting that he feels nations are an artificial construct, drawn up as an accident of history, he was no less motivated to visit all of them in record time.

How he did it

Around-the-world travel may seem out of reach to many, but Hughes insists that it is possible, and on a shoestring budget too. He accomplished this on roughly $100 a week, a bit of good luck and the generosity of strangers. At a particularly low point Hughes found himself stranded in Dubai. While playing a game of pool, his show came up on the television in the room. The logistics manager of a shipping company recognising him, struck up a conversation that led to Hughes’ securing onward transportation. Small boats, container ships, cruise liners and cargo ships became home on his voyage. While Hughes spent the minimum time required in some places, like he did in North Korea, in others he spent more than a month at a stretch. “It was almost rude not to,” he says of his quest to understand what makes a region tick. The true joy of travel unfolded on the often slow and arduous commutes with locals on trains and busses. In his TED talk, Hughes tells of his journey in Iran, a destination he expected to be unwelcoming and how far from the truth that was. His then-girlfriend and parents provided invaluable support along the way, and on a few occasions had to get involved to bail him out of sticky situations.

Struggles along the way

One such situation involved getting arrested, not once but twice, and jailed for days in Cape Verde and later in the Congo. Those misunderstandings around the arrests were resolved and Hughes advises, “Always smile and offer a friendly handshake. I learnt from bitter experience that it’s not worth losing your rag.” Initially thinking travel around the Caribbean would take two weeks, he spent two months traversing the region. Asian visa regulations also added to the complexities. At one point Hughes waited 6 months for promised transport that never materialised.

When Hughes received the news of his beloved sister Nikki’s terminal cancer he left immediately to join her and struggled to regain his motivation after her death. “My sister said before she died that I should not give up. Thousands of people had helped me on this journey and I had promised not to let them down,” he says, ”You’re actually never alone, even when you feel it.”

Having set out his journey in detail on his website TheOdysseyExpedition.com, Hughes hopes that others will follow in his footsteps. “Travelling for long stretches can be stressful and you don’t necessarily want loved ones to see you like that,” he says of his decision to travel alone. “However, travel gives you the wonderful opportunity to immerse yourself in other cultures. I didn’t get sick, I kept in touch with my friends and family.”

Hughes sees himself as “the Jamie Oliver of travel”, dispelling the notions of extraordinary skills and large sums of money needed. The future may hold a television show for Hughes and when asked if he’d do it again, he says, ”I would. But faster this time, knowing what I know now. And, I’d take a camera crew along.”