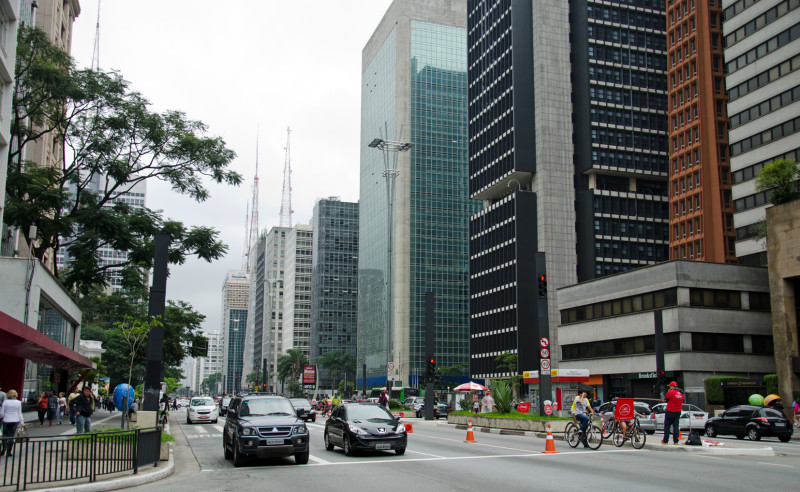 São Paulo’s Emiliano Hotel in the opulent Jardins Paulista neighbourhood offers some clues to the lifestyles of the well-heeled. It’s also the prime position for the business traveller. A man in a fitted pale grey suit speaks into his earpiece, smiles and asks me if he can flag me a cab. No need, I reply and motion to the Santo Grão coffee shop (www.santograo.com.br) with its young, harried servers and elegant clientele, across from the smart, skinny building that he and his similarly dressed colleagues are tending. Well-dressed doormen speaking furtively into tiny body microphones are the necessary

*This Guide to Jardins Paulista, São Paulo was published in the Financial Mail*

Well-dressed doormen speaking furtively into tiny body microphones are the necessary gatekeepers in São Paulo, a megalopolis of a city in excess of 11.4 M residents. They can nab you an often-elusive cab or valet park your car into an unseen and highly prized parking spot (though tourists hardly drive here – just Google ‘Friday traffic São Paulo’). They can coordinate your helicopter’s landing (the skin-tingling whir of blades is a familiar sound in the city), arrange access to buildings and go-to experts, and know where you absolutely must have dinner – you need only ask. 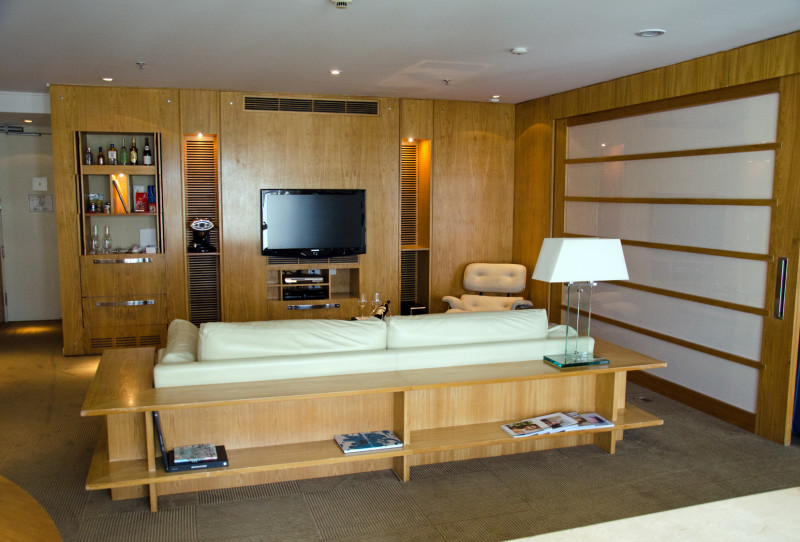 A Hotel That Fits

Before I checked into the Emiliano Hotel (www.emiliano.com.br, 384 Rua Oscar Freire) in the upmarket, pleasantly verdant Jardins neighbourhood, I’d walked along Rua Oscar Freire with its fine stores and cafés, somewhat intimidated by this glam squad in grey. Now that I’d settled into the rhythm of the city for a few days and was actually staying in the hotel (designed by architect Arthur de Mattos Casas), I eased up a fraction and got onto friendly terms with them. They weren’t, I realised with relief, casting disapproving glances at my fatigued Converse sneakers. The grey suits were simply the uniform of their trade. It’s easy to view São Paulo, affectionately called Sampa by Paulistanos, as tight and exclusionary.

The Emiliano Hotel itself embodies a sleek, zen-meets-Milan aesthetic favoured by the moneyed in these parts. To be fair, Italian design and the conspicuous minimalism of glass, concrete and leather pervades the city’s coveted interiors. Pleasing to me was the in-house restaurant at the Emiliano that serves excellent modern Italian fare, with none of the ostentation and dated service you’ll find at the fawned-over Fasano Hotel in Cerqueira César, also a part of upscale Jardins.

The hotel’s rooftop heli-pad is a draw card too, I’m told. 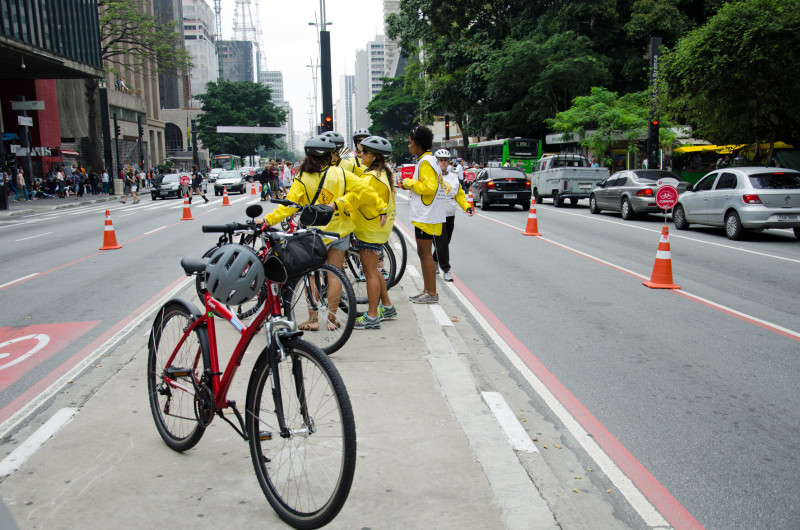 Anything your heart desires

What São Paulo (termed the “City of Drizzle”), lacks in Rio sunshine, it makes up for in wealth. To enjoy the plusher offerings – the exclusive restaurants, bars, and memberships to gated family entertainment centres or “clubs”, you need a whack of reais. Incidentally, a residential apartment or condo in the Jardins Paulista neighbourhood could set you back between 450 000 reais (R 18.37M) to 15 million reais (R 64.5M). Flavia Liz Di Paulo (www.flavializ.com), noted by most top concierges as São Paulo’s best and most experienced private guide, says that while many are not, this is a city for the rich and influential.

For locals, the disparity in wealth and standing is enormous, as it is across Brazil. São Paulo’s burgeoning, multi-strata middle class currently stands in excess of 50 percent.

“Amongst my millionaire friends, and my lower middle-class friends, most have a live-in maid,” says Di Paulo, ”We have a culture where you’re always striving for the next wrung on the ladder. Sadly what you can’t afford, you can get on credit.” 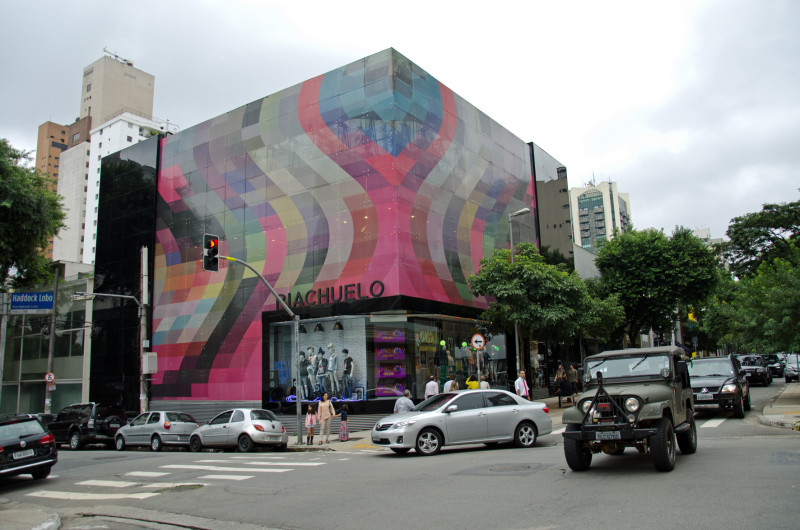 What to do in Jardins Paulista

For the business traveller (and those gathering their bearings), the Jardins area is conveniently close to the commercial hub, museums, shops and several of the best dining experiences.

Meaning ‘garden’ in Portuguese, Jardins has a handsome share of green spaces. If you’re going to be commuting long hours within a concrete maze, the tropical garden of Siqueira Campos (also called Trianon), provides a lush hideaway to eat a sandwich in peace while admiring Amazonian foliage and frogs. Join the Paulistanos for their daily cycle or run in the city’s “green lung”, the 221-hectare Ibirapuera Park, a ten-minute cab ride from Rua Oscar Freire. If you can’t make it to Brazilian architect Oscar Niemeyer’s iconic downtown 30-storey curved residential block Edifíco Copan, you can still admire some of his work around the park.

São Paulo isn’t the easiest city to navigate for runners, so it’s advisable to stick to the park. On Sundays 30 kilometres of the city’s roads are opened to cyclists and well marshalled, with numerous bikes available for rent (www. movimentoconviva.com.br). The Museum of Art (MASP, www.masp.art.br), designed by Lino Bo Bardi, is known as the architectural postcard of São Paul. Situated in Avenida Paulista it’s well worth a visit, and on Sundays an antiques market is hosted at its base. You can hop on a rental bike from around this vicinity and often there are vendors across the road selling local food and crafty knick-knacks. Conveniently, Park Trianon is right opposite the MASP. 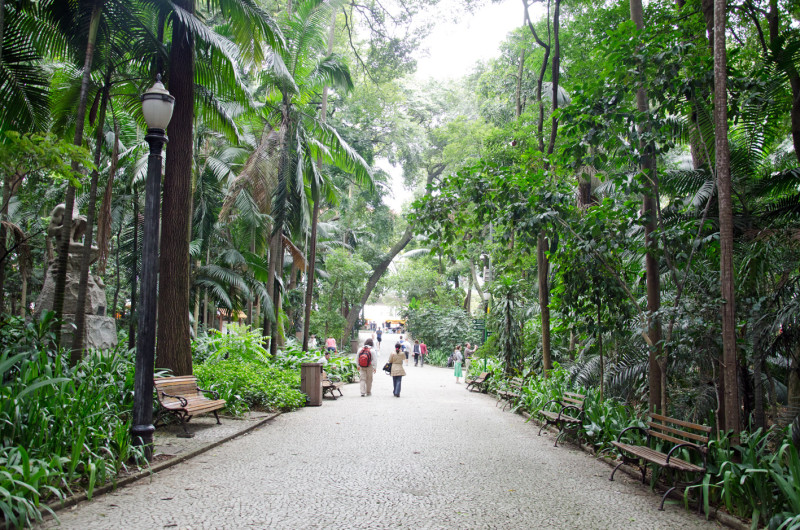 The city is known for its endless food joints and smart restaurants. Staying at the Emiliano, you’re a very short walk away from the city’s most lauded: black-doored D.O.M. (www.domrestaurante.com.br) by tattooed ex-rocker chef Alex Atala. To dine here you need to book well in advance coupled with a sturdy credit card (expect to pay around R3000 a person for a four-course tasting menu with a glass of wine).

A far less pricey option, popular with business diners is Atala’s Dalva e Dito (www.dalvaedito.com.br), a few streets away. Its open spaces and ode to traditional Brazilian food is hugely appealing. Mani (www.manimanioca.com.br) has clocked up a deserved amount of awards for serving modern Brazilian classics and was one of my most memorable dining experiences in the area. For food from the north -east of Brazil you’d be hard pressed to find better than chef Ana Luiza Trajano’s Brasil o Gosto (www.brasilagosto.com.br). If time is tight and money no matter, a guide like Di Paulo can whisk you to private gallery showings, after-hours shopping at local designers’ studios, chauffeur-driven architectural sprints and more. For a general overview (and a huge variety of group and private tours) of the city

If time is tight and money no matter, a guide like Di Paulo can whisk you to private gallery showings, after-hours shopping at local designers’ studios, chauffeur-driven architectural sprints and more.

For a general overview (and a huge variety of group and private tours) of the city beyond Jardins, which is easy enough to navigate yourself, charming Luis Simardi of Around São Paulo is the ideal host (www.aroundsp.com).

And for everything else, the men in grey are the go-to guys in São Paulo.