I’m currently in Peru, on a South American adventure (Brazil, Peru, Argentina) and thought it very fitting to post this article done on South American food trends. I’ve enjoyed plates of ceviche with corn, feijoada, various forms of dulce de leche, rice puddings, purple corn juice, refreshing coconuts and even a stir fried guinea pig (cuy) at a Gaston Acurio restaurant in Arequipa. I’ve eaten at many of the restaurants in the World’s Top 50 Latin America and met really fun, interesting people too. I will writing more about this trip in the coming months. 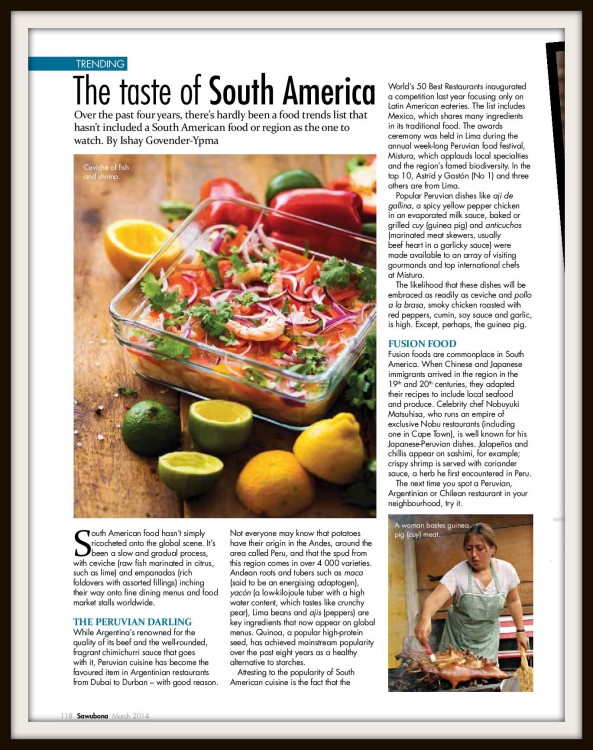 It’s inaccurate to say that South American food has only just ricocheted onto the global scene. It’s been a slow and gradual process, with ceviche (raw fish marinated in citrus such as lime) and empanadas (fold-over rich pastries with assorted fillings) inching their way onto fine dining menus and food market stalls worldwide. Over the last four years there’s hardly been a food trends list that hasn’t included a South American food or region as the ‘one-to-watch’.

While Argentina has held a popular reputation for the quality of its beef and the well-rounded fragrant chimichurri sauce that goes with it, evident in Argentinian restaurants from Dubai to Durban, Peruvian cuisine has been the favoured darling of late. And, with good reason. Not everyone may know that potatoes have their origin in the Andes, around the area we call Peru and that the spud from this region comes in over 4000 varieties. Andean roots and tubers such as maca root, said to be an energsing adaptogen, yacón a low-calorie tuber that has a high water content, and tastes like crunchy pear, lima beans, and ajis (peppers) are some key ingredients that now appear on global menus. Quinoa, a popular high-protein edible seed has reached mainstream popularity over the last eight years, as a healthy alternative to starches.

An indicator of the popularity of South American food lies in the fact that the World’s 50 Best Restaurants fashioned a competition, as of last year, focusing only on Latin American restaurants. The list includes Mexico, which shares similarities in origin of people and ingredients. The awards ceremony descended upon the annual weeklong Peruvian food festival, Mistura in Lima, which applauds local specialties and the region’s famed biodiversity. In the top 10, Astrid y Gastón (number 1) along with three others, are from Lima.

Popular Peruvian dishes like aji de gallina, a spicy yellow pepper chicken in an evaporated milk sauce and baked or grilled cuy (guinea pig), anticuchos – marinated meat skewers, usually beef heart in a garlicky sauce, were made available to an array of visiting gourmands and top international chefs at Mistura.

The likelihood that these dishes will be embraced, as readily as ceviche and pollo a la brasa, a smoky chicken roasted with red peppers, cumin, soy sauce and garlic, is high. All save for guinea pig, perhaps.

Fusion foods are commonplace in South America. When Chinese and Japanese immigrants arrived in the region in the 19th and 20th centuries, they adapted their recipes to include local seafood and produce. Celebrity chef Nobuyuki “Nobu” Matsuhisa, who runs an empire of exclusive Nobu restaurants, including one in Cape Town, is well known for his Japanese-Peruvian fusion food. Jalapenos and chillis appear on sashimi for example; crispy shrimp is served with coriander sauce, a herb he first encountered in Peru.

The next time you spot a Peruvian, Argentinian or Chilean restaurant in your neighbourhood, give it a go. Years of consistent trend forecasts say you should.