Rise of the Global Food Stars

This article was written for Etihad Inflight Magazine, December 2013 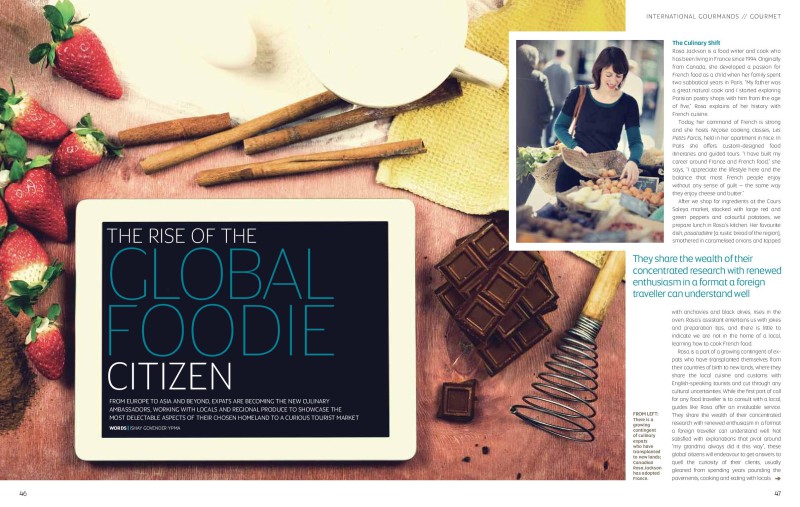 From Europe to Asia and beyond, expats are becoming the new culinary connoisseurs, working with locals and local produce to showcase the most delectable aspects of their new chosen lands to a curious tourist market. The rise of the global food stars has made understanding food culture more accessible to foreigners. 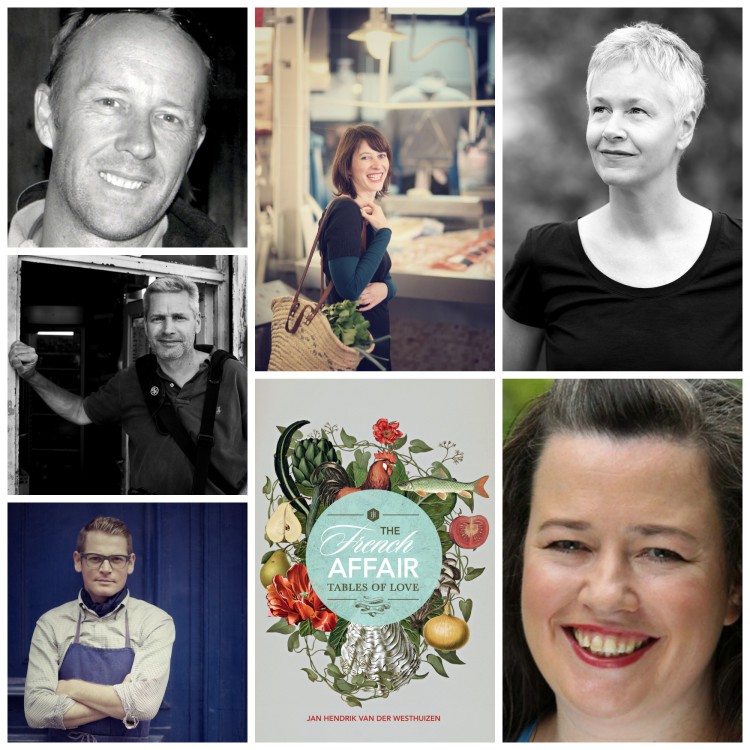 Rosa Jackson is a food writer and cook living in France since 1994. Originally from Canada, soft-spoken Rosa developed a passion for French food when her family spent two sabbatical years in Paris when she was a child.

“My father was a great natural cook and I started exploring Paris pastry shops with him from the age of five,” Rosa explains of her history with French cuisine.

Her command of French is strong and she hosts Niçoise cooking classes, Les Petits Farcis held in her apartment in Nice. In Paris she offers custom-designed food itineraries and guided tours. “I have built my career around France and French food,” she says, “I appreciate the lifestyle here and the balance that most French people enjoy without any sense of guilt – the same way they enjoy cheese and butter!”

After we shop for ingredients at the Cours Saleya market, stacked with large red and green peppers and colourful potatoes, we prepare lunch in Rosa’s kitchen. Her favourite dish, pissaladière, a rustic bread of the region, smothered in caramelised onions and topped with anchovies and black olives, rises in the oven. Rosa’s assistant entertains us with jokes and preparation tips and there is little to indicate we are not in the home of a local, learning how to cook French food.

Rosa is a part of a growing contingent of ex-pats who have transplanted themselves from their countries of birth to new lands, where they share the local cuisine and customs with English-speaking tourists and cut through the uncertainties. While the first port of call for any food traveller is to consult with a local, guides like Rosa offer an invaluable service. They share the wealth of their concentrated research with renewed enthusiasm in a format a foreign traveller can understand well. Not satisfied with explanations that pivot around “my grandma always did it this way”, these global citizens will endeavour to get answers to quell the curiosity of their clients. Usually gleaned from spending years pounding the pavements, cooking and eating with locals.

While Rosa focuses on markets and cooking, Mark Lowerson sheds light on the mystery of Hanoi street foods through his engaging food tours in Vietnam.

I meet Mark on a particularly humid day in Hanoi. We spend the next seven hours exploring the city, chatting to his favourite street food vendors and discussing the history and changes experienced over the years. Mark arrived in Vietnam in 2002 and after two months he decided to sell his café in Melbourne, Australia to settle in the country. He started teaching English and slowly learned Vietnamese. Together with his partner, he runs a sought-after street food tour business in Hanoi, which developed from his blog, Stickyrice.

“What we do is help travellers to get under the surface of Vietnam, to have authentic interactions, to get exposure to food that holds some barriers and fears without dumbing it down,” he explains.

The vendors have over the years, slowly come to accept Mark as an avid eater and cultural ambassador.

The American couple behind the popular blog, Eating Asia, Robyn Eckhardt and David Hagerman have carved a niche as experts on Asian food and as of late, Turkish cooking. Having lived in Asia for more than 16 years, they work as a writer and photographer team for leading publications.

Today, Robyn and David spend their time between their home in Penang, Malaysia and Turkey. They also run food tours and are working on a cookbook on the lesser-known intricacies of Turkish home-style cuisine.

“I tell stories about people, places and cultures. Food is an entrée to other lives, cultures and places. The best entrée, I think, because it is a part of everyone’s life and it is neutral,” says Robyn.

It is from this somewhat neutral platform, that these expats are able to breathe vigour in images and words, written and spoken about their new culinary homes. Dishes that are considered ‘normal’ or lacklustre by locals are sought out and shared by the new guard.

“While adventure eating has no appeal to me, we focus on cuisines and foods that don’t get much coverage elsewhere. I know this, because most of what appears on the blog won’t be touched by an editor at a food magazine – it’s ‘too out there’,” Robyn confides.

When Robyn and David host walking food and photography tours in George Town, Penang, they interweave history and nuggets on architecture and culture picked up from their time in the town and numerous hours spent researching and interviewing residents. Mark and Rosa apply a similar technique to the tours they run 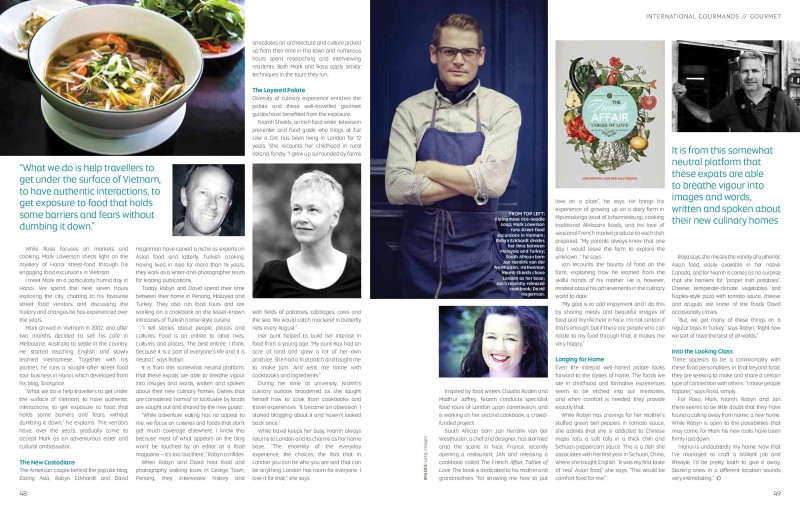 Diversity of culinary experience enriches the palate and these well-travelled gourmet guides have benefited from the exposure.

Niamh Shields , an Irish food writer, television presenter and food guide who blogs at Eat Like a Girl, has been living in London for 12 years. She recounts her childhood in rural Ireland, fondly. “I grew up surrounded by farms with fields of potatoes, cabbages, cows and the sea. We would catch mackerel in butterfly nets every August.”

Her aunt helped to build her interest in food from a young age. “My aunt Kay had an acre of land and grew a lot of her own produce. She had a fruit patch and taught me to make jam. And sent me home with cookbooks and ingredients.”

In university, Niamh’s culinary outlook broadened as she taught herself how to cook from cookbooks and travel experiences. “It became an obsession. I started blogging about it and haven’t looked back since.”

While travel keeps her busy, Niamh always returns to London and its charms as her home base. “The enormity of the everyday experience, the choices, the fact that in London you can be who you are and that can be anything. London has room for everyone. I love it for that,“ she says.

Inspired by food writers Claudia Roden and Maddhur Jaffrey, Niamh conducts specialist food tours of London upon commission, and is working on her second cookbook, a crowd-funded project.

South African born Jan Hendrik van der Westhuizen , a chef, and designer has stormed onto the scene in Nice, France and recently opened a restaurant, JAN and released a cookbook called The French Affair, Tables of Love. The book is dedicated to his mother and grandmothers, ‘’for showing me how to put love on a plate”, he says. He brings his experience of growing up on a dairy farm in Mpumalagna (north of Johannesburg), cooking traditional Afrikaans foods and his love of seasonal French market produce to each dish prepared. “My parents always knew that one day I would leave the farm to explore the unknown, “ he says.

Jan recounts the bounty of food on the farm, explaining how he learned from the skilful hands of his mother. He is modest about his achievements in the food world to date.

“My goal is to add enjoyment and I do this by sharing meals and beautiful images of food and my life here in Nice. I’m not certain if that’s enough, but if there are people who can relate to my food through that, it makes me very happy.”

Even the intrepid well-honed palate looks forward to the tastes of home. The foods we eat during our childhoods and during formative experiences seem to be etched in our memories, and when comfort is needed, they provide exactly that.

While Robyn has cravings for her mother’s stuffed green bell peppers in tomato sauce, she admits she is addicted to Chinese mapo tofu, a soft tofu in a thick chilli and Sichuan peppercorn sauce. This is a dish she associates with her first year in Sichuan, China where she taught English. ”It was my first taste of ‘real’ Asian food,” she says, “This would be comfort food for me.”

Rosa says she misses the variety of authentic Asian food, easily available in her native Canada, and for Niamh it comes as no surprise that she longs for ‘proper Irish potatoes’.

Cheese, temperate climate vegetables and Naples-style pizza with tomato sauce, cheese and arugula are some of the foods David occasionally craves.

“But, we get many of these things on a regular basis in Turkey,” says Robyn, “Right now we sort of have the best of all worlds.”

Into the Looking Glass

There appears to be a commonality with these food personalities, in that beyond food, they are seeking to make and share a certain type of connection with others.

For Rosa, Mark, Niamh, Robyn and Jan there seems to be little doubt that they have found a calling away from home, a new home. While Robyn is open to the possibilities that may come, for Mark his new roots have been firmly laid down.

“Hanoi is undoubtedly my home. Now that I’ve managed to craft a brilliant job and lifestyle, I’d be pretty loath to give it away. Starting anew in a different location sounds very intimidating.” 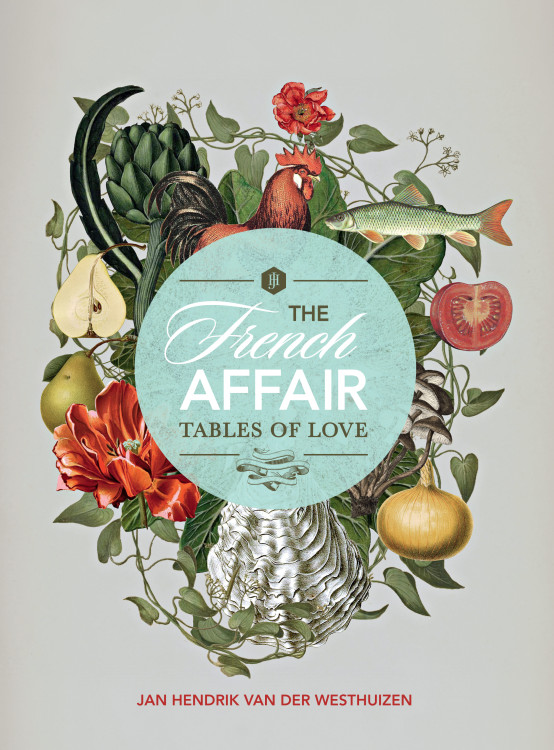