Why I don’t buy Organic

Are you buying ‘organic’ produce? 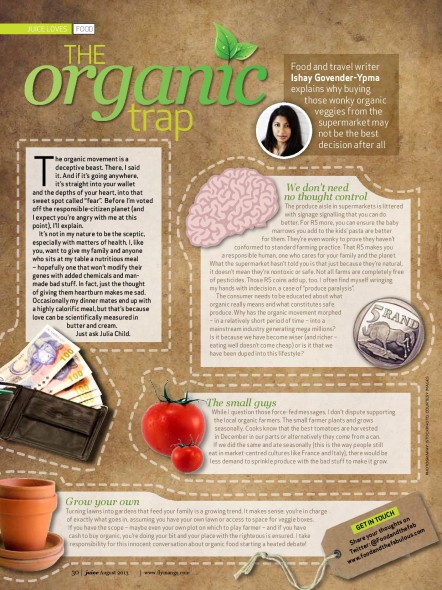 The organic movement is a deceptive beast. There, I said it. And if it’s going somewhere, it’s straight into your wallet and the depths of your heart, into that sweet spot called ‘fear’.  And before I’m voted off Planet Responsible Citizen, and I expect you’re angry with me at this point, I’ll explain.

It’s not in my nature to be the skeptic, especially with matters of health. I, like you, want to give my family and anyone who sits at my table, a nutritious meal, and hopefully one that won’t obliterate their chances of spawning genius progeny by modifying their genes with added chemicals and man-made bad stuff. In fact just the thought of giving them heartburn makes me sad. Occasionally my dinner mates end up with a highly calorific meal, but that’s because love can be scientifically measured in butter and cream. Just ask Julia Child.

The produce aisle in supermarkets, which is where most of us shop for our food in South Africa is littered with signage signaling that you can do better. For R 5 more you can ensure the baby marrows you add to the kids’ pasta are better for their health and well-being. They are even wonky in shape to prove the point that they haven’t been forced to conform to standard farming practice. That R 5 makes you a responsible human, one who cares for your family and the planet. What the supermarket hasn’t told you is that not all organic farms use zero pesticides and just because it’s natural does not mean it’s non-toxic, or safe.

And, all those R 5s add up. I often find myself wringing my hands with indecision, a case of ‘produce paralysis’, fully aware that the parking bill is rising in direct proportion to my indecision.

WE DON’T NEED NO THOUGHT CONTROL

By now you’re demanding I quote references to the bad science I’m using to back up my views. What I’m saying is that the consumer needs, deserves in fact, to be educated about what organic really means, and more than that, what constitutes safe produce. Why has the organic movement morphed in a relatively short period from a lady in a torn knitted jumper at the local market selling tubers and sprouts to a wholly mainstream industry generating mega-millions? Is it because we have all become wiser (and richer – goodness knows eating healthy sure don’t come cheap) or is it that we have been duped into this lifestyle?

While I question those force-fed messages, I don’t dispute supporting the small local organic farmers. The small farmer plants and grows seasonally. If he is the type of guy selling at your local market, he knows he’ll be skewered if he doesn’t. He or his assistants are there to answer your questions and meet your eye. Cooks know that the best tomatoes are harvested in December in our parts, or alternatively come from a can. And if you don’t, I suggest you google a seasonal produce calendar. If we all ate seasonally, and incidentally this is the way people still eat in market-centred cultures like France and Italy, there would be less demand to sprinkle out of season produce with the bad stuff to make it grow faster or bigger.

Turning lawns into gardens that feed your own family is a growing trend. It makes sense, as you are in charge of what goes in, exactly. This is assuming you have your own lawn or access to space for veggie boxes. Again, in promoting this self-sufficient, health-obsessed culture we alienate and further separate rich from poor. If you have the space, maybe even your own plot to play farmer, if you have cash to buy organic, you’re doing your bit and your place with the righteous is ensured.

I take full responsibility for an innocent conversation about organic food opening up a can of worms. Meanwhile, I will continue to trawl the aisles, wringing my hands, shaking my head and dreaming about a garden where I wear floral wellingtons and grow-my-own, smugly.