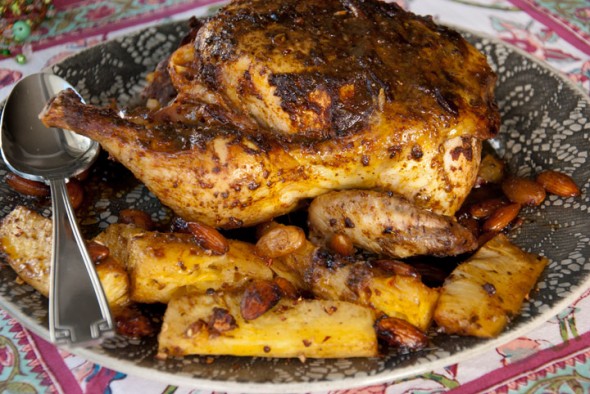 My mother called it Tandoori chicken. Roasted on a silver baking tray it would envelop the kitchen in the musky, woody aroma of ground jeera (cumin) and the fresh slices of pineapple she added would caramelise and char slightly, releasing a sweet perfume. Green chillies, pounded would also be rubbed over the chicken and inside the skin adding a fiery but controlled heat. Whole almonds spattered in the oil on the tray and enrobed themselves in the spices that slid off the bird as they roasted to a golden brown. On cold, wet days, doors and windows were shut, holding these smells and sounds captive and engraving them in my memory. Tandoori chicken.

It was only in my late teens that I ate actual tandoori chicken made in a restaurant, in a proper tandoori oven. I was perplexed. Tandoori chicken is tinged a bright orangey-red, charred and smokey and marinated in a spiced yoghurt. Either my Mother had pulled a fast one on us or she looked at her scrapbook of newspaper and magazine recipe clippings, carefully cut out and pasted in a hardcover notebook, and borrowed and tweaked (to a pretty good degree).

The other day, I read a post about baby roast chickens by Sam of Drizzle and Dip and was reminded that my oven hadn’t seen a bird in it for a while. Vivid memories of my Mother’s tandoori chicken came flooding back and just like she has done before me, I modified her recipe.

I felt like using more than just harissa paste to make a Moroccan spiced chicken. Instead I combined masala and ghee (these would be the Indian components) along with the ras el hanout , a few spoonfuls of NoMu’s Moroccan rub (which I find so perfectly balanced, I buy it in bulk and often give tins of these away as gifts), the juice of half a lemon and a good pinch of cinnamon to make a rich paste. And so we have an Indo- Moroccan fusion of flavours. 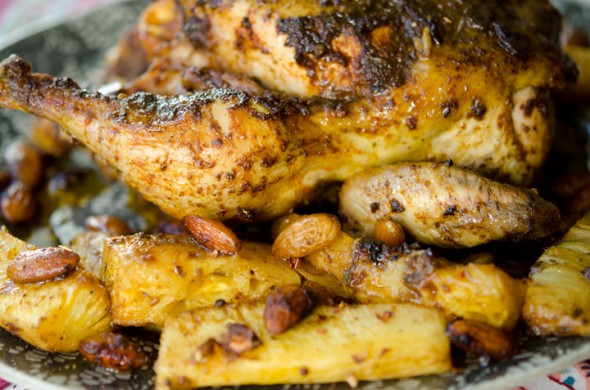 Rubbed over the bird, in it’s cavity and under the skin, the paste clings and browns with the chicken imparting incredible flavour and fragrance. I used the ghee on a cold day, directly out of the fridge so it aided in forming a thick paste. Adding pineapple slices in the last 40 minutes of cooking and almonds in the last 20 minutes will add both sweet and nutty components that compliment the spicage perfectly. 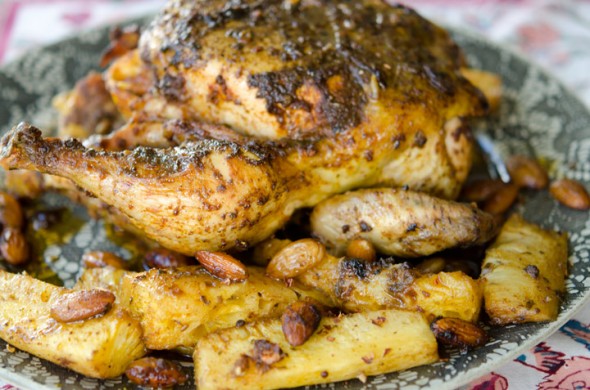 1 free range chicken (mine weighed 1.5 kg – adjust spices according to weight of the bird)

1 lemon, cut in half

100g almonds (blanched or with skin)

Add all the spices, ginger and garlic paste, salt, the juice of half a lemon and the ghee to a bowl and mix well. Use your hands because you’re going to have to use them to smear the chicken anyway.

Add both lemon halves, including the one you squeezed the juice out of, in the cavity.

Pour the oil over- it is a generous amount but you are not adding any stock or liquid and you want the bird to be moist and bronze up nicely.

Roast for 35 minutes and then turn the bird. Raost for a further 50 minutes, turing again when you add the almonds. Chicken is done when a skewer is pierced between thigh and bone and juices run clear.

Add pineapple slices in the last 40 minutes and mix them in the pan juices. Turn pineapple after 20 minutes and bring the heat up to 200 degrees Celsius for last 10 minutes.

Add the almonds in the last 20 minutes and coat with the spicy oil.

If you find this a bit complicated, first cook the chicken. Then remove from pan. Add first the pineapple to the pan and cook for 2o mintes, turn and add the almonds. You may add the chicken along with the pineapples and almonds in the last 10minutes to brown at 200 degrees Celsius.

Serve with couscous or basmati rice and a simple tomato, onion and mint sambal. 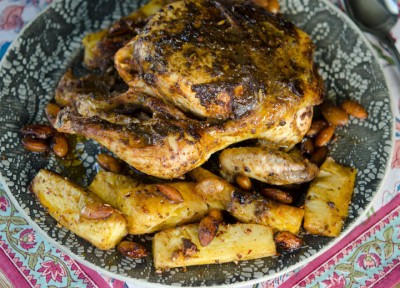 Now, look at this plump beaut of a chicken and what do you see? That’s correct. A leg and a wing are missing. Why? Because  it was made the night before and we were hungry and the amazing smells compelled us to. The stew we had left over was promptly abandoned and we tucked in and licked our fingers after. What can I say? This blog documents some of the food we eat. It will always be about the eating and enjoying first and if anything’s left over, and it gets a nod, it gets on here. Little bit of Food and The Fabulous confession for ya.

Got any of your own to share? Oh, please do.