Hating Brussels sprouts could be in your DNA.

That’s the  headline and premise of an article in the Huffington Post on what is categorically of late been classified the most hated vegetable in Britain and the United States, the Brussels sprout. Most hated! That’s some feat, especially against thousands of other types of veggies, like kale, broccoli, cauliflower and spinach. All humdingers in their own right.

“Scientists from the Eden Project have been testing a theory that a love or hate of the divisive vegetable comes down to your DNA.

It’s been claimed that a particular mutated gene — which is present in about half of the world’s population — decides whether or not we will like sprouts.

People with the mutation are said not to taste the bitterness of the Brussels sprouts, caused by a bitter chemical similar to PTC (Phenylthiocarbamide) and are therefore more likely to enjoy them.”

Other studies speak of the over-cooked texture, the smell, older sprouts being less palatable, babies breastfed by mothers who eat a wider variety of foods being better prepared, peer pressure, the example set by adults (shew, no pressure eh!)

I never warmed to Brussels sprouts until I had them fried with onion, bacon bits and chunks of Granny Smith apple. That combination of salty, smoky bacon, savoury onion, the herbaceous bite of crisp green leaves (grey and stodgy, no longer) and the  sweet-tart tang of the apple is quite something. Equally nice are Brussels sprouts made with bacon (or pancetta), pine nuts and golden sultanas.

My friend Linda, a chef in London sent down a delightful, generous bag of goodies recently, including a bottle of her home-made sweet chilli sauce. This sauce is as far from the generic orangey-red viscous gloop you get at the supermarkets as they come. Made with sugar, galangal, ginger, garlic, chillis, lime leaves, cider vinegar and soy sauce, it’s the real deal.

Immediately I thought of pairing it with the Brussels sprouts I had. I didn’t have any bacon at hand and was not going to let anything stop me. I used some coppa that I flash fried and removed and cooked the Brussels in the pan fat and white wine. I added the coppa at the end, with delicious results. Feel free to substitute with bacon or pancetta.

P.s Moms, I think the kids might like this one. The sweet chilli is pretty mild. Give it a try. 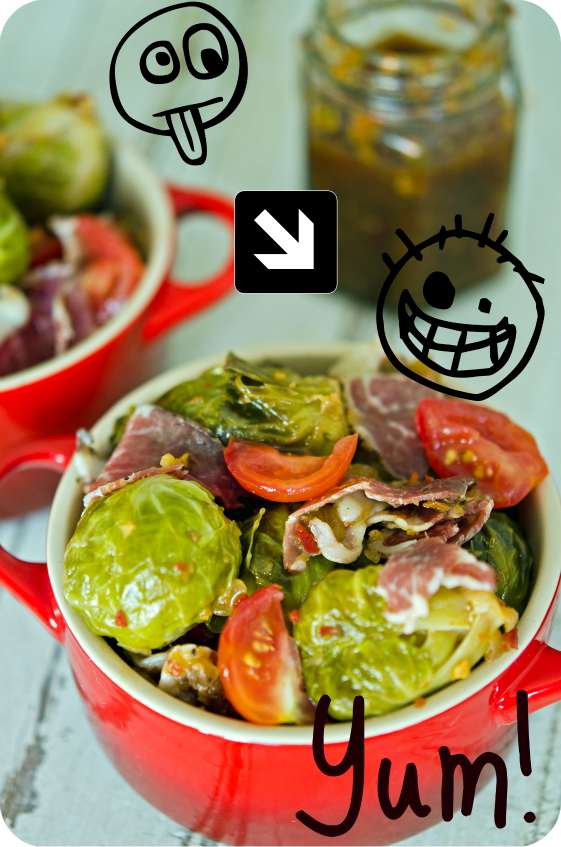 Kids who hate Brussels sprouts, might just love them now!

Heat wide based, heavy bottomed pan on medium-high on the stove.

Add the coppa and fry for a few seconds on each side till crisped slightly and a bit of the fat releases (turn heat up if necessary).

Remove coppa and set aside.

Turn heat down to medium, add olive oil and fry onions till soft and starting to brown.

Add the wine or stock and the Brussels sprouts. Place lid on pan and cook for ten minutes.

Remove lid. The sprouts should be intact but softened. Naturally they will not remain bright green, but they will not be grey, at least.

Cook for another minute or so, allowing sugar to dissolve.

Serve as a side with any number of roasts or as by itself with fluffy mashes potatoes. 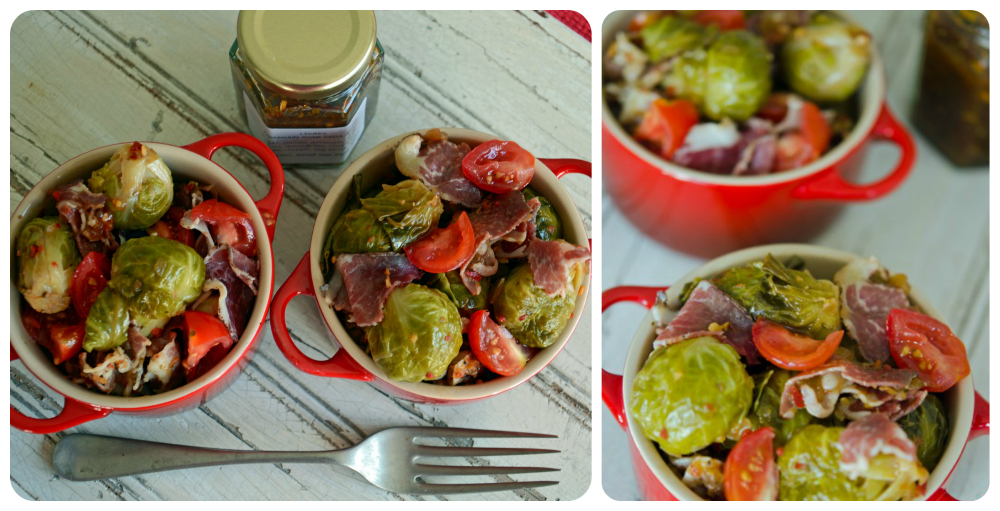