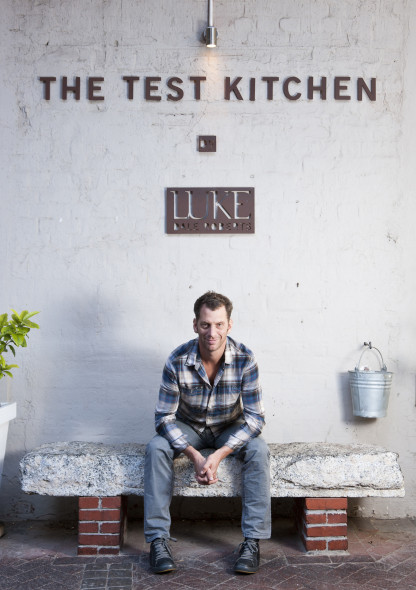 This interview was published on Fine Dining Lovers.

Dressed in whites they coordinate their movements between pan and plate in a kitchen in open view to patrons. It’s evident that they are young and tough, self assured in their manner, with cheeky grins to spare when you catch their eye. You hear his voice, low and calm and a confident chorus replies “Yes, Chef”. Luke Dale-Roberts moves like a gazelle, agile and light-footed around his team and back to his perch at the pass. Between greeting guests and overseeing each plate every night at The Test Kitchen in the urban artisans’ precinct of Woodstock, Cape Town, Dale Roberts is carving his creative stamp on the global food scene. His Pot Luck Club restaurant has expanded into a stylish top-floor restaurant with an almost 360 degree panorama over the city. A pop-up branch in Verbier, Switzerland has taken his 5-tastes ‘tasting plates’ concepts to the hip ski crowd.

Having recently been awarded the prestigious Cocao Barry One To Watch accolade at the S. Pellegrino World’s 50 Best Restaurants, we spoke to him about food, his vision and keeping life in balance.

1. Tell us more about your culinary background

I was born in Britain, and started my training at Baur Au Lac Hotel in Zurich, Switzerland. It was, at the time, recognised as one of the top five hotels in the world and a great start for a youngster. Thereafter, I moved back to London and worked at Elenas L’Etoile under Kevin Hopgood who trained with the Roux brothers. The focus there was classic, French fine dining. My next move was to Australia and this introduced me to Pacific Rim fine dining and was an exciting time. I returned to London, to Bali Sugar and the emphasis was on fusion cuisine. My next move was to Soho House Media Club where many A-list celebrities hung out. But our job was the food, not gawking. I then explored Asia for 5 years working in restaurants from Singapore all the way to Seoul. The type of food I cooked and ate there and on the streets on off days, left an incredible impression on me. It was punchy in flavour, well balanced and exciting. It’s influenced my personal style greatly. I moved to South Africa, my wife’s home country and now mine in 2006 as executive chef at La Colombe at Constantia Uitsig which received local and international recognition during my time there. In 2010 it was voted number 12 by the World’s 50 Best. In 2010 I branched out on my own opening The Test Kitchen with a lab off-site to test and experiment. It’s since expanded. At the end of 2011, I opened The Pot Luck Club a more causal dining experience where patrons are served ‘small plates’. PC has since expanded to a pop-up in Verbier and a new premises in Cape Town.

2. Describe your day to us

I start at 6 am and go through emails, have breakfast with my family and usually drop our son off at school at 8 am. From 9 am -12 noon I’m occupied with restaurant and staff admin between the two premises and the lab. At 1 pm I’m at service at the Test Kitchen. Usually 3 30 – 6 pm is spent with the family. From 6 30 – 11 30 pm I run the pass at the Test Kitchen and pop upstairs to The Pot Luck Club occasionally. It’s lights out at midnight for me

3.  What are your plans with Pot Luck Club (PLC) and The Test Kitchen (TK)?

I aim to develop the Test Kitchen’s offering and service as far as my creative character can. I want to grow my team and develop the young skill as far as possible. The food at PLC is ever evolving and provides both us and the customer with a kind of rapid gratification. Pot Luck is a brand that can be replicated in any city in the world with the correct level of skill and support. This may well happen in years to come. 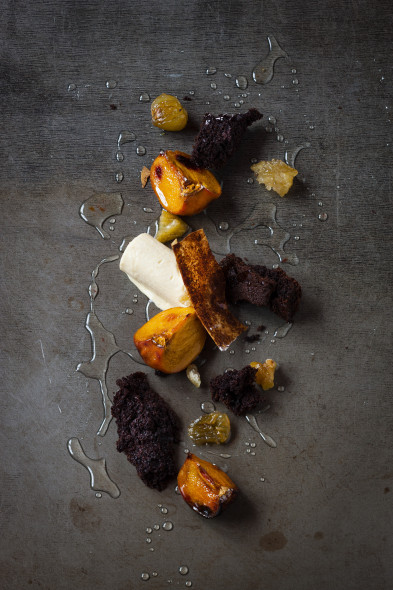 4. Describe your approach to food.

My mantra is ‘’flavour’! TK is very conceptual, there’s a feeling, a story and a multi-sensory element to most dishes. Pot luck is simpler but delicious.

5. Tell us about your staff.

My staff are my family, I love seeing them grow and evolve. I enjoy being part of that. There is no better feeling than seeing young talent grow and confidence begin to kick in. I often say there is a point in a chef’s career where there is a trigger and it all starts to make sense. If I can be part of the creation of that then I’m happy.

6. Tell us a little about the dining scene in South Africa.

Its growing fast. There is a lot of talent here and I think it’s defining itself as a culinary destination slowly. I have seen some exciting development from a supplier level, particularly in the last year. I believe suppliers should motivate themselves to be the best they can be and achieve the same level of excellence as the kitchens in the fine restaurants.

7.What new techniques or flavours will you be experimenting with?

I keep experimenting with a dish until it’s perfect to me. I find myself losing the layers and getting more ‘primal’ and natural with the dishes.

Our Jerusalem artichoke parfait with coffee granita and shaved macadamia

9. What does winning the Cocao Barry One to Watch award mean to you?

It’s awesome. It shines a spotlight on us and the South African dining in general which is a great thing.

I work very hard and fast and I try to take two holidays a year with my family. Recently we were at Eden Island in the Seychelles which was fabulous. It was chilled, we reconnected with nature. I surf, and it was perfect for that. 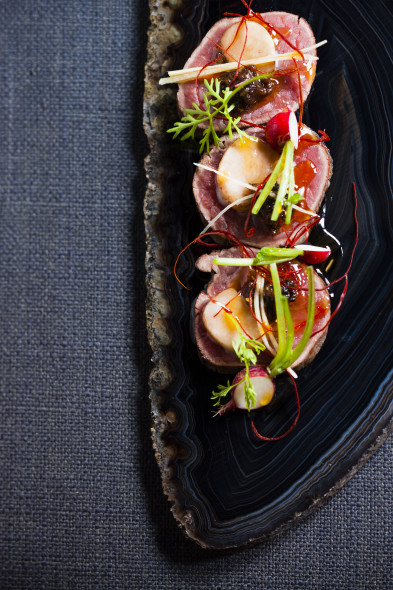 *I am remunerated for published work with this publication*