This was published by Woolworths Taste magazine Jan/Feb 2014 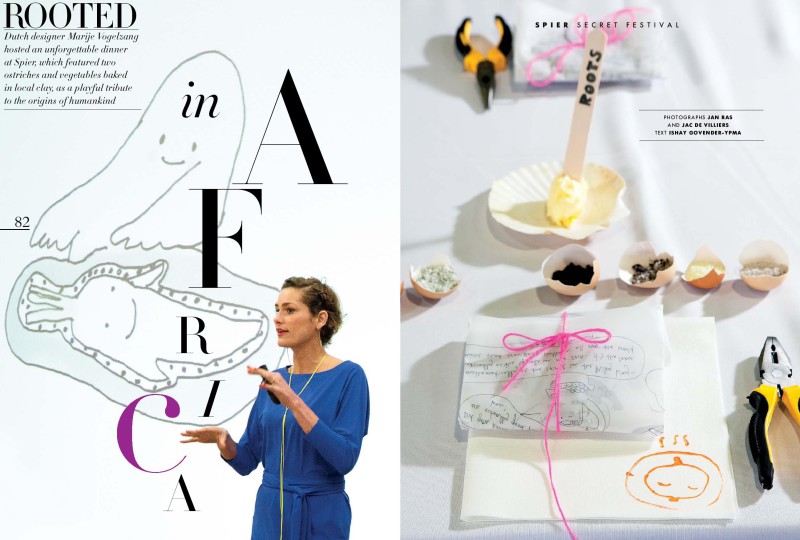 Text below is unedited version.

Roots: A dinner in Africa

Executing an ancient cooking method, Marije Vogelzang, renowned Dutch eating experience designer, wrapped and baked root vegetables and two whole ostriches in local clay. She invited South Africans attending the Spier Secret Festival to partake in hammering the delectable baked contents free. What resulted, was an experiment in the cycle of life – from earth (clay) to root, to mouth. And it is the mouths, every one of them, which will shape the future of food, according to Marije.

“A table full of clay sculptures and hammers looks like a kind of post-modern archeological landscape,” says Marije.

At the long table before me, hammers with fluorescent pink bands and baked coloured clay shards lay strewn as guests feast in merriment. Beyond the significance of placing root vegetables in clay, symbolically the earth that covers them, and returning the smashed clay back to the ground after the evening, Marije is interested in exploring human roots.

For her eating installation at the Spier Secret Festival, a food conference pioneered three years ago by Capetonian Hannerie Visser, Marije shares, “When we speak about root vegetables I also think of roots in general and I think of people’s roots. Where do we come from? As South Africa is the rainbow nation and Africa would be the place where mankind originated, I make the reference to human roots.”

Effectively, breaking the precious clay to get to the root vegetable, invites conversation about what lies within and I gather this is a key message Marije wants to deliver. That it is what lies inside, that counts.

One Rainy Day in Rotterdam

I start to piece together Marije’s story a good week before the Spier Secret festival.

We meet at Future Food House, the space she is curating in Rotterdam for the World Food Festival. The weather won’t play along, so we take shelter in a nearby café and chat about her life, starting with her design student days in Eindhoven to her life today as an ‘eating designer’.

“I don’t design food, “ she says, “ I have no culinary background. I design projects around the act of eating. I want to engage people on an emotional level and get them to think about the bigger issues in new ways.”

Her project with a group of Roma gypsies in Budapest, called Eat Love Budapest, provided a set of marginalised women the opportunity to tell their difficult stories, while feeding strangers from behind the anonymity of white sheets. It proved to be a powerful experience for both the feeder and the fed.

Similarly, projects around death and funeral food, food miles, the elderly and communities in conflict in Beirut have garnered Marije the title of one of the first eating designers.

“No one was really working with food when I started. Designers usually make useful things for humans. I was surprised that food, in this way, was overlooked,” she says.

Looking at sketches created for the Eat Love Budapest project, it is obvious that the creator understands the basics of human psychology – rolls of paper towel are provided, perhaps to wipe hands, and possibly the tears that are expected from participants. As with advertisers, how much manipulation of emotion goes into creating such a project, one has to ask.

When Marije expresses her exasperation at the attitudes of the baby-boom generation, her own father included, there is a feeling that a little manipulation may go a long way.

“My dad won’t eat meat that resembles an actual animal. I am frustrated by the lack of knowledge, knowledge my grandparents had, that we’ve lost in a single generation.”

“I work closely with Hannerie and her team,’ says Marije, “ Most things Hannerie sources locally. I prefer to use local ingredients, and am excited about serving ostrich.”

Before being invited into the hall, guests wash their hands in fragrant water. We sit at the first of three eating stations that caters for the120 guests in attendance. Marije, dressed in electric blue with a lime green cardigan welcomes and guides us into the cellar at Spier Wine farm; she will remain a discrete part of the evening as she coordinates her team.

Unwrapping printed parcels, tied with flashes of string in a florescent pink that Marije has made her signature, reveals nuts and boiled speckled quails’ eggs, packaged perfectly by nature.

The seafood buffet, a seemingly endless trough of crayfish tails, mussels, oysters, scallops and prawns is where the cleansed hands prove essential. No utensils are provided, and guests eat, standing next to each other, sharing condiments like lemon, salt and Tabasco sauce, and leaving the shells along the sides of the tables. Mini flirtations occur around the oyster section, with well-worn clichés exchanged between strangers emboldened by this novel way of communing.

There is a sense that we’re creating a gigantic mosaic of discarded shells, and no matter how we lay them, the design is beautiful.

Escorted to the next station, clay-baked roots are served on long tables, alongside a host of handmade sauces with flavours like cumin, sesame, chilli and olive.

A flurry of flashbulbs goes off when the ostriches are brought in from their borough-oven in the ground outside. It’s near impossible to get a place close to the action where the clay is being removed and the bird sliced, so a friend takes to fetching slices for everyone in our group.

Wooden boards make the perfect canvas to display the sauces in several hues; meat and vegetables are dipped as we talk to strangers and reconnect with acquaintances. 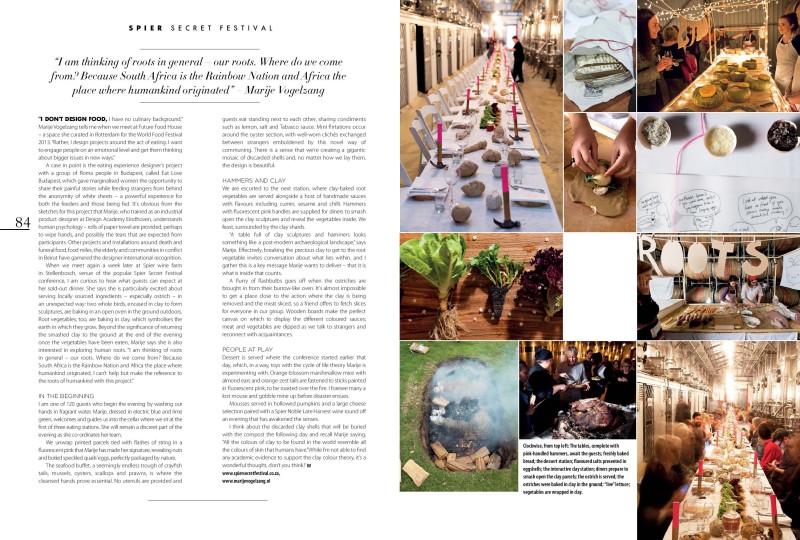