Marmite versus Bovril- I put the test to a stew 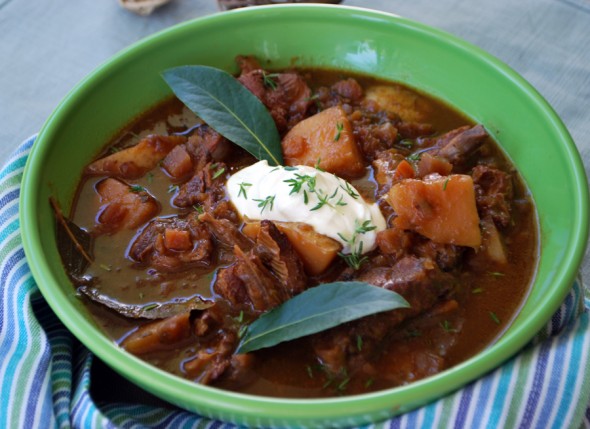 Marmite versus Bovril. There are staunch supporters in both camps, many of whom wouldn’t dare cross from one to the other and extoll the virtues of their chosen spread with the fervour of a mega-phone carrying picketer. Chances are, if you’ve grown up in South Africa, and are in the 22- 90 age demographic, one of the sandwich spreads you ate (and loved or maybe even loathed) was Marmite or Bovril or perhaps even both.

An Ode to Marmite

The Joy of Marmite

I spread my Marmite sparingly, upon my buttered toast,

Of all the things to put on bread, it’s what I like the most 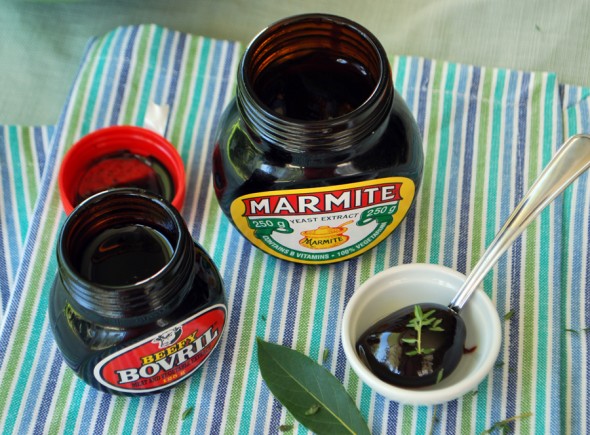 Do you have a favourite?

My family did not indulge in Marmite, Bovril or Pecks Anchovette spread, another South African classic. I think it’s fair to say that my parents bought the spreads and baby brother and I took a whiff and turned our little noses up. We found more comfort in Melrose cheese spread (who could forget “Oh Boy! Mum remembered Melrose”?) and Black Cat peanut butter sandwiches – used separately of course.

I tweeted a picture whilst still at the stores, asking which one of the two spreads I should purchase, but that didn’t come to any good. “Bovril”, said the one camp.” Marmite”, said the other .

And so, in a flurry of indecision, I purchased both jars and both failed in my taste test. I found myself becoming the young child again turning her nose up as the spoon approached mouth. I thought the rich saltiness (both these are concentrated umami sources, most certainly) would work well in a peasant style stew. I intended using the leftover pieces of a lamb pack I had bought (stewing pieces, two chops and ribs) in a simple stew with carrots, potatoes and herbs and the both the Marmite and Bovril were flavourful stock bases for it which mellowed during the time in the oven. 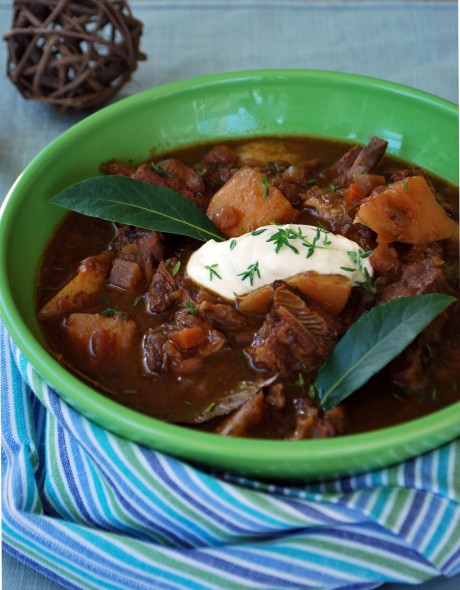 350g carrots, diced (use sweet potato, butternut or pumpkin and cut into chunks if preferred)

Heat oven to 180 degrees Celsius with rack on lowest level.

Fry onions and bay leaves in olive oil for 3 minutes on medium heat until onion are translucent. Add garlic and stir- taking care not to burn the garlic.

Add lamb,  garlic paste and paprika if using and turn to coat. Cook for 5 minutes, turning up the heat.

Lower heat to medium and cook for 20 minutes uncovered.

Add 1/3 cup of water, if necessary and remove pot from the heat.

Cover the pot tightly with heavy foil, making a small gash in the centre.

Place pot in centre of the oven and cook for 1.5 hours.

Remove, adjust seasoning and serve with a dollop of sour cream and crusty bread or rice. 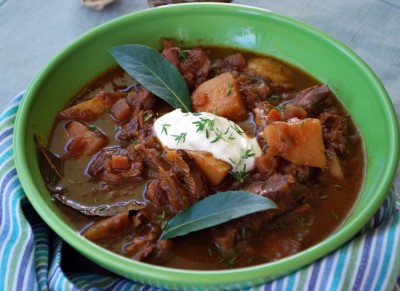 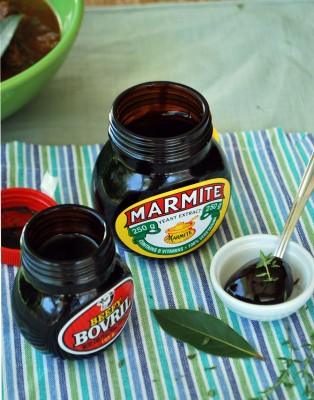 battle of the spreads