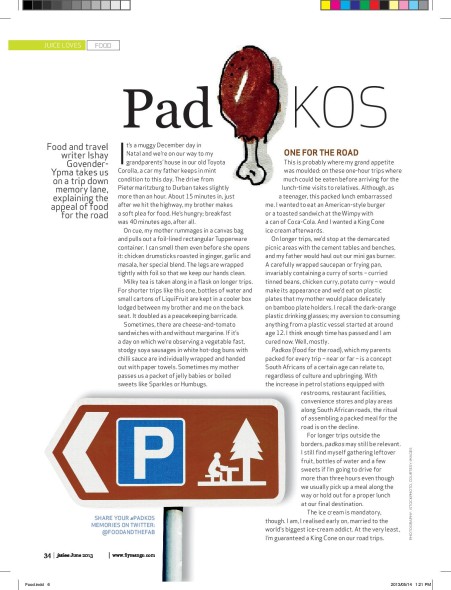 Food for the Road

My original piece on padkos

It’s a muggy December day in Natal and we’re on the way to my grandparents’ house in our old Toyota Corolla, a car my father lovingly keeps in mint condition to this day.

The drive between Pietermartitzburg and the gramps in Durban will take just over an hour. About 15 minutes into the drive, just after we hit the highway, my brother makes a soft mewling plea for food. He is hungry. Of course. Breakfast was consumed 40 minutes ago, after all.

My mother rummages in a canvas bag and pulls out a foil-lined rectangular Tupperware with a red lid. I can smell them even before she opens the lid – chicken drumsticks, roasted in ginger, garlic and masala, her special blend. The legs are wrapped tightly in foil to ensure our hands are kept clean.

Milky tea, which I didn’t care for, is kept in a flask and packed for longer trips. For shorter trips, like this one, a few bottles of frozen water which thaw rapidly along the way and mini boxed Liqui fruit juices, and even before that Capri Sun, were kept in a trusty cooler box lodged between my brother and I in the back. It served as a keep-the-peace barricade too.

Sometimes there were cheese and tomato sandwiches with margarine and one without, as I had just started to assert my food dislikes. 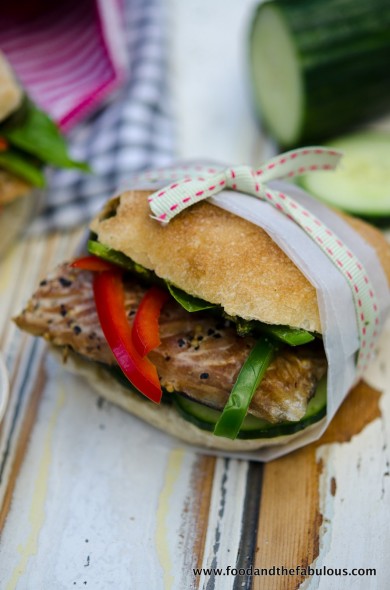 If it was a day on which we were observing a vegetable fast, stodgy soya sausages in white hotdog buns with chilli sauce were individually wrapped and handed out with paper towels. Sometimes my mother passed us a packet of jelly babies or boiled sweets like Sparkles or Humbugs.

This is probably where my grand appetite was moulded – on these one hour trips where much could be eaten before our lunch time visits to relatives. Though truth be told, as a teenager, this packed lunch embarrassed me. I wanted to eat an American-style burger or a toasted sandwich at the Wimpy with a can of Coca Cola, at the shiny-new petrol stations. And I wanted to buy a King Kone ice cream afterwards.

On longer trips, we’d stop at the demarcated picnic areas with the cement tables and  benches, and my father would haul out the mini gas burner. A carefully wrapped pot or a pan, invariably containing a curry – tinned beans, curried, chicken curry, potato curry, would make its appearance and we’d eat on plastic plates which my mother would place delicately, on top of bamboo plate holders. I recall the dark orange plastic drinking glasses and my aversion to consuming anything from a plastic vessel that started at around age 12. I think enough time has passed and I am cured now. Well, mostly.

What my parents packed for every trip, near or far, the South African ‘padkos’ or food for the road, translated from Afrikaans, is a concept we, of a certain generation and older relate to, across cultures. With the increase in petrol stations along South African roads, equipped with restrooms, restaurant facilities, convenience stores and play areas, the ritual of assembling a packed meal for the road may be on the decline. It’s more convenient to buy a fresh sandwich or hot meal and a cold drink nowadays. 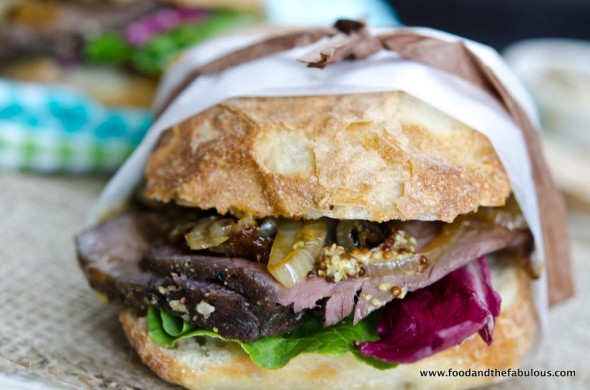 Those packed meals and drinks played a vital role in the days before almost every car had air-conditioning (and ours certainly did not). Those were the days when meals that contained no pork or beef, my family ascribing to a Hindu diet, were not readily available.

For longer trips outside the borders, the padkos lunch may still be relevant. These days for road trips that are three hours or longer I find myself gathering left over fruit, bottles of water, and some sweets from the cupboard. We pick up a meal along the way usually, or hold out for a proper lunch at our final destination. The ice cream though, is mandatory. I am, I realized early on in the relationship, married to the world’s biggest ice cream addict.

At the very least, I’m guaranteed a King Kone on our road trips. 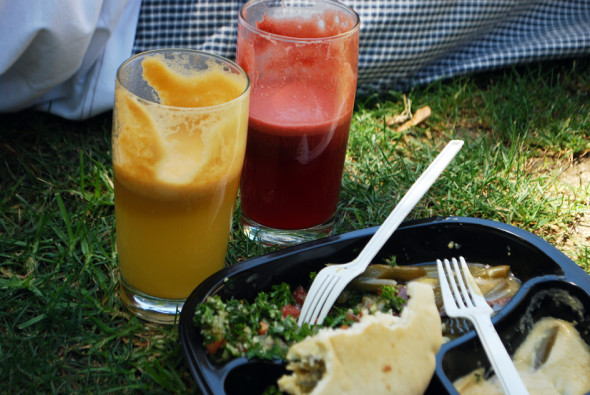 taking a break after a long drive
www.foodandthefabulous.com