I was pondering earlier in the day, if a rice based dish could be served as Spring-time fare. Breyanis, and such are considered hearty, heavy dishes. But why not? Paella, originally Valencian, is a perennial favourite throughout Spain and in so many international restaurants.
So, it would be a pared down breyani. A simple Pilaf, or pilaau, had me reaching for Mayat’s Indian Delights. This book was the equivalent of The Joy of Cooking, in my house, growing up in Pietermarizburg. I would pour over the recipes and pictures and feel a sense of belonging achieved in the narratives about the origin of the dishes. I even convinced my mother to lend me her copy when I left to University, just for the comfort factor. I bought my own copy a few years ago. No doubt, Indian descendants in South Africa have modified the recipes over generations to accommodate availability of produce and differing lifestyle choices. I can not imagine using ghee (which is a clarified butter), in the quantities required by these traditional recipes on a daily or even once off basis. I feel the same about butter as an ingredient, but Nigella Lawson is working on helping me overcome that one. She is quite the bully! And in cahoots with Julia Child. 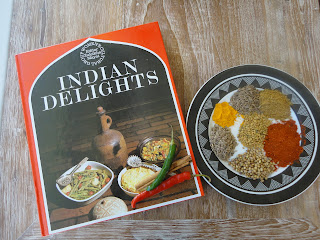 Every Indian mother, of a certain generation in Natal has a copy! photo property of foodandthefabulous.com

Pilaf or Pilaau quite simply means a flavoured rice. And this is done by adding a few spices to the water in which the rice is boiled. A traditional pilaf contains lentils, which I omitted. I also cooked  the pilaf in the oven at the end, which is not necessary. You can complete the cooking process on the stove, if you have a large cooking vessel to accommodate all the ingredients. I do not.
I made a quantity larger than I normally cook, but I have left overs that freeze well. 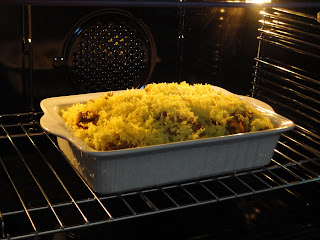 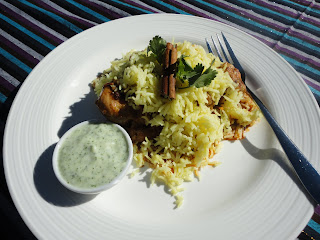 1,5 kg skinless chicken thighs and breasts (this is just a preference, you could use pieces with skin on)
600g chicken wings
3 cups of basmati rice, soaked in water for at least 1 hour (this removes the starchiness and is the key to achieving non-sticky, individually discernible rice grains. I have see many try to cheat on this step, and fail).
1 medium onion, sliced
5 small bay leaves
30-50 ml olive oil
15g butter (well, after all that mascarpone, my resolve withered!)

Start with soaking the rice in water.
Then, make the marinade for the chicken. I added the first three ingredients to the chicken, in the deepest bowl I had and mixed using two wooden spoons.
In a blender, blitz together the rest of the ingredients. I did it in halves. Pour over chicken and mix (with spoons. Green yoghurt- do I need to elucidate further? If you do it by hand, be a pal and let me know!) to coat. Cover and set aside.
At this point I preheated the oven to 180 degrees Celsius.

In a large pot, add oil and fry the onions. Add bay leaves. Cook the chicken till nicely coloured, and in batches. I did them in three batches, for approximately 8 minutes a batch. Then I added all the chicken to the pot, with a cup of water, set the lid on and left to cook on a medium heat, until the rice was ready.
Drain the rice till clear, and boil with all the spices for the rice. It should be done in 15 minutes. Drain in a colander and place over the pot. Don’t even think about rinsing the rice as you do with pasta. The rice has a chance to get rid of stickiness- inducing moisture by being suspended over the pot, in the colander.
For the assembly, add a layer of chicken to an over proof dish. Spoon gravy from the pot over the chicken, generously. Spoon over a layer of rice. Add more gravy. Repeat with chicken and rice. But do not add gravy over the final layer of rice. Slice the butter over.

Cook in oven for 35 minutes. In retrospect, I should have covered the dish with foil, to allow the pilaf to steam nicely. But it did not affect the result.