Having loved Enid’s Blyton’s Magic Faraway Tree as a child, and now, I thought I’d adopt a topsy turvy approach and start at the end and work to the beginning. Of the story of Sunday’s lunch.
Besides, you must be bursting at the seams to hear about the semi- freddo I mentioned in the last post, as was I, to taste it! And if you wondered, I managed to exert incredible restraint and did not have so much as a whiff of the Goddess as she lay resting in the freezer. I felt awful at having to slather over my unstrained and not too pretty berry sauce over her. Turns out ol Semi is a fan of the chunky! 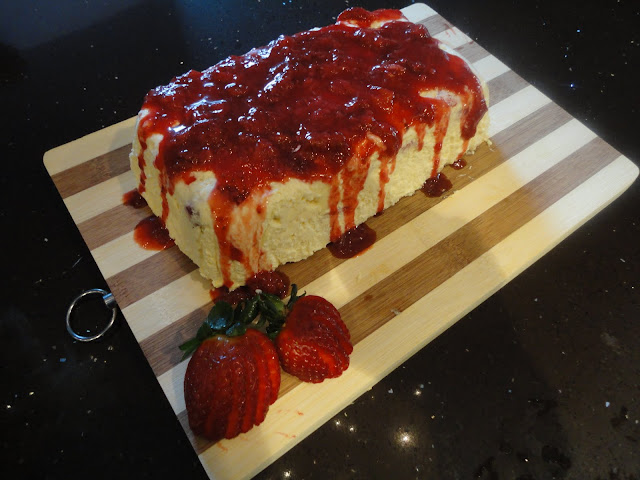 Yes, the board was a mission to clean after! photo property of foodandthefabulous.com

I could not find raspberries, as called for in the original recipe. I did not want to use the blueberries stocked at my local stores, which would also give a sweet-tart flavour, as they were imported. I am trying my goodly best to keep it local with the fresh produce. I substituted with strawberries and a spritzing of lemon juice.

Brush a loaf tin with oil and line with cling film and set aside. This helps the cling to adhere more snugly to the tin and prevent ripples and plasticy folds in the end product, and is easier to turn the semi-freddo out, I assume. I have only ever made one other before.

In a mixing bowl whisk together the egg yolks and caster sugar until frothy. I added a teaspoon of conventional vanilla essence, as the thought of consuming eggs uncooked, is still a very difficult one for me and the vanilla gets rid of the eggy smell, at least. Vanilla extract or paste would be too overpowering for this recipe and I prefer using it when I want to showcase the heady vanilla taste and aroma. Mix in the mascarpone and beat in thoroughly.

Fold in the chopped nougat. I found chopping the nougat to be tedious. It doesn’t matter how good or sharp your knife is, the nougat will stick to it. Think calm thoughts.

Whisk the egg whites until stiff peaks form. Fold the whisked egg white. I did it in true James Martin style- first half the egg whites, and then the other, being as gentle about the process as possible while trying to incorporate both mixtures thoroughly. I felt quite virtuous after.

Transfer the mascarpone mixture into the loaf tin, cover and freeze for two hours minimum or overnight until set.

I placed the semi-freddo in the stay cool compartment of the fridge for 4.5 hours before serving and it was in the perfect state for slicing and eating. Not overly hard and crystally.

Raspberries, I agree would have made the perfect sauce. I chopped and macerated 7 large strawberries in 3 tsp caster sugar.

I added this to a small saucepan and dolloped in 3 tbsp of a raspberry jam by St Dalfours and let the two simmer away. I mashed the mixture as it softened and left it to cool. James calls for the sauce to be strained. Through a sieve. I had guests waiting. I just spooned the sauce over and…… showtime for the Lady!

The health conscious amongst us did mention the high calorific content- it is rich. Seconds were had. Another comment went along the vein of evoking pleasant childhood memories. I took a bow and thought to myself “Look at THAT!”. I may have blurted it out too.

Once sliced, you won’t notice the difference between a strained sauce or not. I will make this again, with raspberries.
I had 1/4 of the chicken and rice left over, which I mixed together separately. (Sitting in the chest freezer in handy single meal for two portions!) I served the pilaf with a mint & coriander raita and a green salad using the left over asparagus I had from the Zesty Prawn, Asparagus and Red Onion Salad made the day before, crisp lettuce, slices of granny smith (the apple), baby cucumber (Israeli, but a local pro
duct. Thank the Lord!) and the zest of half a small lemon. Served with  a light honey and mustard dressing, that I got my husband to whip up by reciting the method to him, while I tended the pilaf. Was delicious! 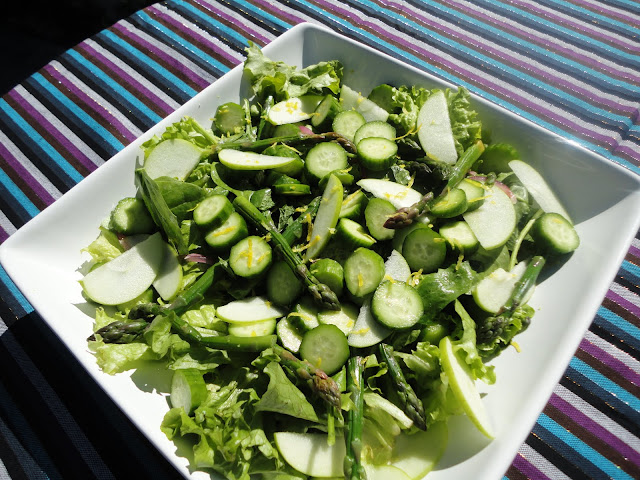 And, so in true Magic Faraway Tree style, we’re at the beginning of this topsy turvy lunch story.
The starter was a simple affair of dates, nuts and green olives. The magic being the olives that the chef Sixteen82 at Steenberg Estate, so very kindly sold to me, on 9 August 2010. These are the finest, freshest tasting green olives I have ever tasted in the country and took me back to the beauties I enjoyed in Madrid two years ago. I marinated them in an olive oil and a light, meaning not very salty brine with a few teaspoons of Melissa’s Egyptian Dukkah spice. 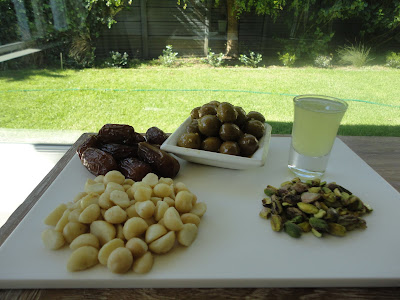 Yes, I see the green mamba in the garden. What can I say? This is Africa! photo and mamba property of foodandthefabulous.com
And we all needed a nap after that.
The end (for now).