The agony and the envy

Day 2 at New York Fashion Week and any sympathy I may feel for the designers, stylists, technicians, and assistants and their overworked, caffeine saturated bodies and frazzled nerves is replaced by pure and utter greed. And lust. And longing. For the fashion and new designs of course. I couldn’t give much of a twiddly hoot about the front rowers and hangers on. Nor about the oddly shaped, exaggeratedly elongated models.

I’m a regular at Cape Town Fashion week, a lowly paying consumer, so all I manage to pick up after the comps are handed out to every media genius and their plus one is a seat third from back to backrow.

So, I could very comfortably sit in the back row at New York Fashion Week and enjoy the muffled gasps of awe and wonder as *gasp* another A/B/C lister walks to the golden seats in front.

My resolve would probably crumble when it came to Anna Wintour though. Any one’s who’s watched The September Issue documentary on Vogue’s annual bumper issue would gather that Ms Wintour is a combination of cunning (slightly Devil wears Prada) and enigmatic. Or should we say, rather private. So, it’s hard to tell, because she is deliberately protective of her space and persona, if the horror stories spread about her are all indeed fact or just partly so.

I’d err on the side of caution, avoid Ms W in the front row and sit very gratefully in the back.

Nevertheless, dinner today did not come from my loving kitchen nor was it had in any of Cape Town’s lovely eateries, as should be the fashion on a Friday evening.
Instead dinner was delivered in bag, from our local Nando’s. Sigh.
My husband on the other had, relishes these Nando meals, having never eaten chicken up until oh, let’s say three and a half years ago. I know, it’s hard to conceive, but let’s just save a lot of time and not go there.
So grilled chicken, mild, potato wedges and Greek salad, courtesy of Nandos, for dinner today.
I think their web site is really cool ! http://www.nandos.co.za

Today was an incredible day to spend time outdoors, eating, reading, resting. If you had the opportunity. Now, as I hope that tomorrow looks on us with the same sprightly Spring fervour as today, I’m thinking back to brunch last Sunday.
Not a cheffy affair, but wholesome, satisfying food, served warm and eaten on the deck. A nap was required after and was had, I can assure you! 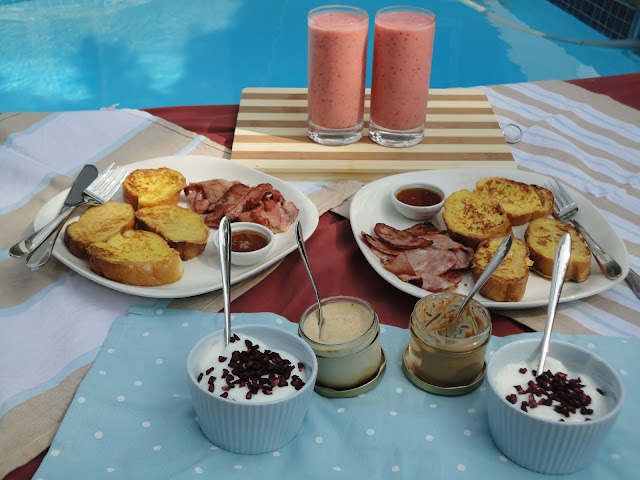 French toast made with ordinary baguette and Knead’s turkish bread, lean bacon & Canadian maple syrup.
Smoothies made with “all the fruit in the house” including the juice of a ripe lemon, which I find balances the bananas and the cup of yoghurt added (as opposed to curdling it). It’s amazing what whizzing things together at high speed can achieve…and avoid!
The cute jars are Oded’s ( http://odeds-kitchen.co.za/products.html ) desserts – a cardamon flavoured creme caramel (husband did not like this one.The cardamon was quite an unexpected taste I suppose. They use Neebs vanilla products, as do I. The caramel was runny at the bottom and not the thickened sort I expected) and a rooibos panacotta (very rich and as you can see it was attacked before I laid it out!)

And fat free vanilla yoghurt with dried pomegranate seeds. I am thrilled with this find- I’m unsure of the supplier as the packaging is not distinct, but I get these at the Old Biscuit Mill. I have used them in raitas and Moroccan inspired salads. And if you’ve followed my tweets before, I am usually there stocking up on kitchen staples at least every second weekend. You have to brave the crowds and the fluff if you want the food!