After months of tweeting about the ordinary lunches and suppers, mostly coming out of my kitchen, I’ve decided to surpass the 140 character limit and blog about them.
Perhaps this is rather ambitious of me, as I am an utter novice bloggette, in spite of the fact that I am fully aware that this is the 21st Century and that everyone with an opinion has one and while I can shoot and aim as well as the next girl, I’m no pro with a camera. To add to this, I am not a chef. And let’s be honest its all been done before. Julie Powell will tell you so.
Never-the-less, I’m keen to send my thoughts out there. It’s a bit like sending an email, 15 years ago- you sent it out into cyberspace, not sure it would even be read! What a kick you got to receive a reply!
Well, it was like that for me. And I would be thrilled if “you” read this…or at least found it vaguely amusing.
Food and a few of the things I find fabulous: foodie ingredients and gadgets, and I wouldn’t be true to myself if you didn’t see a handsome bag or two (or shoe!), or a handsome Barcelona Footballer! Well that, for another day!

Right. Dinner for 2
What with all this blog creating tonight, it had to be done in a flash in the pan kind of manner. 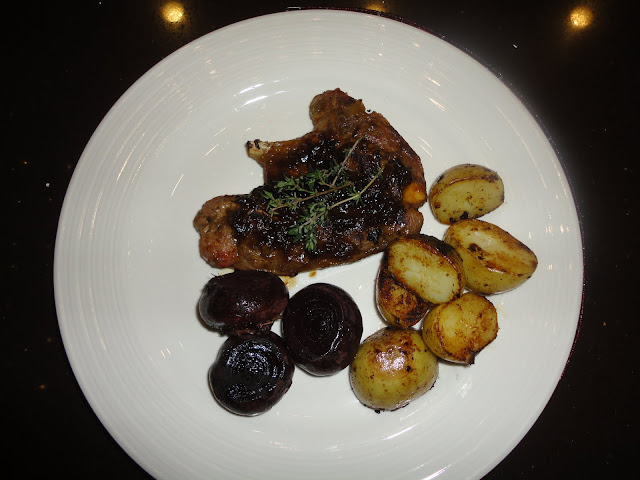 Smear the chops with 4 teaspoons of the paste, a few grinds of salt (to taste), and the paprika. Massage in.
Heat a pan (I prefer a Tefal, because it won’t become a horrid sticky nightmare when you add the onion relish) and add a splash of olive oil.
Cook chops on both both sides, to your desired state of doneness. Approximately 3 minutes on each side, in my case.
Add onion marmalade to one side, flip over and repeat flip.
Remove from pan, but keep the pan ready for potatoes. (There’s absolutely no need for washing up first -how easy!)

I served baby potatoes and baby beetroot, done in the simplest manner I could think of.
Steam potatoes and beets in a steamer in the microwave, separately of course. Timing would depend on wattage of your microwave, and the amount of vegetables you’re steaming.
Chop potatoes in half and sprinkle with a pinch of salt . Add a touch of olive oil to the pan and brown the potatoes. The onion relish left in the pan will add a gorgeous caramel colour. Don’t be alarmed if bits get a little black. I call it character!
The beets have an incredible sweet and earthy taste and I don’t think they need anything more than a little olive oil drizzled over.

Dinner in less than 15minutes.

Delicious! I would have to say that, no? But it was!I would have liked a little greenery with dinner though.
I’m planning on making some “green” juices of the variety that Kimora Lee Simmons enjoyed when getting into shape for her Baby Phat photo shoot. Oh, sorry, we shan’t speak of Baby Phat, what with Ms Kimora being recently and rather unceremoniously dethroned, and in my case it certainly won’t be for a photo shoot. Of any kind.