At the outset, let me make it clear that I abhor fads. I dislike being told what to wear and when, where to holiday, what to listen to. You get the idea. I’m grateful for book and restaurant suggestions and someone bringing to light that the most delicious tomato pesto is available at X. I may try it, but I’ll make up my own mind thank you very much. The thing with trends is that they remain trendy and season-bound.

I am after long-lasting and classic.

So, what of Meat Free Monday? I think, even someone like me, needs no convincing that logically, this is a step toward cutting down our consumption of meat and lessening the strain on a planet ready to fall apart. I do not believe I’m exaggerating about the latter.

I would also like to add, that I do not think the aim of Meat Free Monday is to generate a caste of cool kids who cook vegetables for a day as a ploy to one-up those not ‘in the know’. I also think binning otherwise edible left-overs, just to prepare a purely vegetarian meal is both wasteful and counterproductive to the aims of the movement.

What does the movement aim to achieve?

The movement known as  Meat Free Monday  (MFM) is canvassing support the world over, fronted by Sir Paul McCartney and his daughters Stella and Mary in support of healthy eating and more specifically the health of the environment. The website states that MFM is

“an environmental campaign to raise awareness of the climate-changing impact of meat production and consumption. Many people are unaware that livestock production is responsible for 18% of global greenhouse gas emissions – that’s more than the entire transport sector.”

I believe that climate change has reached the stage where it is not a vague possibility to be discussed by scientists and geologists over 3 day seminars. It is a reality. The floods, earthquakes, tsunamis and other natural disasters, all occurring within disturbing proximity to each other, and in massive scale are no coincidence.  They do make for exciting road trips for the journalists who cover them! But the basic fact that world is over populated and does not contain the natural resources to sustain us for as long as we think, is a reason enough to make an effort to lower the emission of green house gasses in an attempt to curb climate change. Perhaps there is no hope and we’re fools for trying. The alternatives however, are none. Stella McCartney’s late Mom Linda McCartney remains the inspiration for both her design principles (she will not use leather and furs in her work) and the MFM movement. It is a well known fact that Linda was a vegetarian (or is that vegan?) long, long before it became popular and lived a life of simplicity. 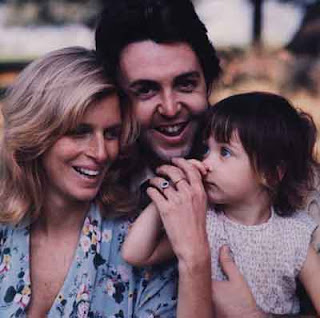 I grew up in a house where, as part of the cultural and religious upbringing, we ate vegetarian based meals 3 days out of 7. It was hell! Only because as a precocious youngster, I didn’t appreciate being told that I HAD to eat green bean curry only, for the sake of keeping one of the Gods (different days were allocated to the honour of a different God. This may sound strange and even blasphemous to you, unless you’re Hindu or are familiar with the religion). I think I just spotted a pattern regarding my non-conformist nature! Old habits die hard? I wanted every day to be chicken curry and roti day!

Cue a decade or two later and I have realised that I enjoy vegetables, I crave them and when I do not  include enough of them in my diet, my body lets me know. And to be honest, now I think my Mum’s green bean curry, braised dry with onions, is one of the more delicious methods to prepare that bean. My childhood self just blew me a raspberry.

Meat Free Mondays is a start. It could be any or even two days a week or more if you want. Vegetable fasting, as we did for years, comes with one minor problem. In order to prepare a nutritionally balanced meal, all food groups should be included. Protein sources are not many though. If you’re adverse to soya, that’s a real pity. I ate it in its many forms as a child and am thankful for that early introduction. I love the texture of soya products. I find it comforting and versatile. My husband has just begun the journey and it’s the terrible twos all over again!  I discovered tofu in my very early student days and its not a bad option too. If Thai and Eastern food were the Rolling Stones, we’d be its biggest groupie.Tofu makes for an ideal partner with the flavours of these cuisines. You’ve got to be nifty with beans (which can, let’s be honest, pose a whole other problem of their own), legumes, cheeses, textures and flavours. Meat free any day can pose a challenge.
Ricotta cheese would be the protein source for this meal.

During the discussions on twitter yesterday about meal options for MFM, I read so many interesting and mouth watering possibilities.
Taking into account that we were still digesting Sunday’s beeeg meal, one gym session later, I was  in the mood for something light. As a challenge to the Big Mac Culture we find oursleves in, I made a mushroom (sans patty) burger. The Chic Mac. I’ve made these a few times before and credit Jamie Oliver as the inspiration. This is his baked mushrooms stuffed with ricotta recipe. I gave mine a Moroccan twist. We honeymooned there and even pre-honeymoon we’ve enjoyed these foods and I find its a cuisine whose flavours incorporate so well into the foods we love eating.

*Note a soya burger patty or chick pea patty would also be an obvious option. And good a one!strong>Le Chic Mac 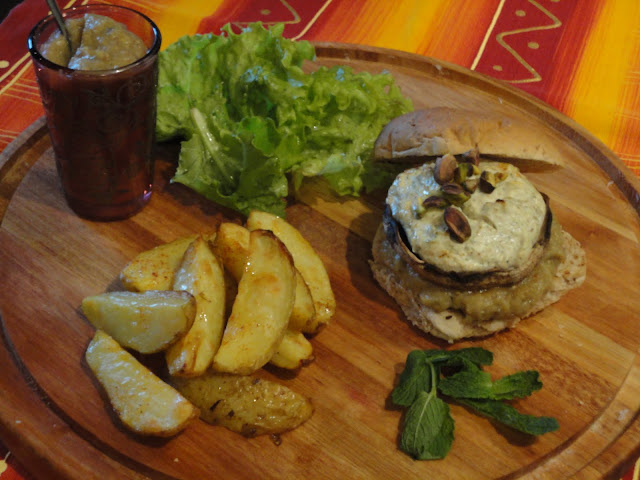 Preheat oven to 180 degrees Celsius.
Spray n Cook a large baking sheet or tray (I find this works best for me. My Mum always used  Spray n Cook and still does). I do everything on one baking tray, as you will see below.
Blitz ricotta with other ingredients, and stuff mushrooms.
Add mushrooms with aubergines and potato wedges and bake for 20min and grill for a further 5 min.

Splash olive oil and sprinkle salt over the aubergine halves and bake with the mushrooms and potatoes. The flesh should be quite soft when you remove it from the oven.
Skin and blitz with other ingredients. Season to taste and reserve dip.
*25 minutes is sufficient to cook one large aubergine in my oven.

We could do better than the fries the Big Mac comes with! Here’s my cheat version potato wedges.

Steam potatoes for 6 min in the microwave.
Cut into wedges. Splash olive oil over to coat. Season.
Add to tray with other ingredients to brown nicely.

I served the Le Chic Macs with wholewheat buns, spooned the spiced dip over and added the stuffed mushrooms on top and a plain green salad.
We did not feel cheated by the lack of meat, at all! 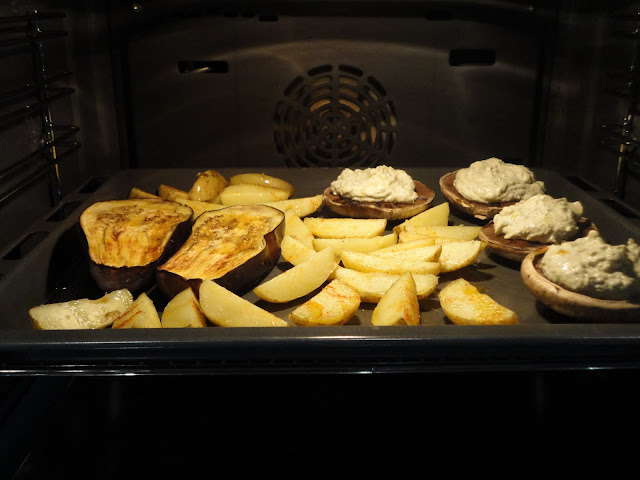 All together now: baby, its hot inside!! photo property of foodandthefabulous.com

For dessert, it was Italian kisses. *Smoooooch!* 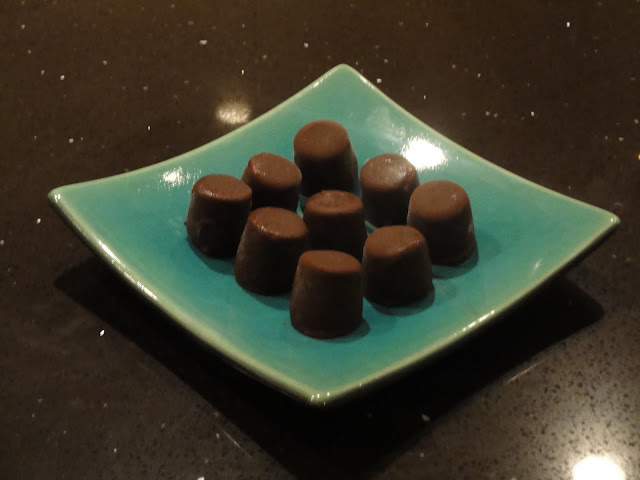 Tonight, I think we’ll have the left over chicken pilaf from Sunday
Further than MFM – Green Living

We have been trying, since moving into a house we built at the end of last year, to adopt as many green practices as possible. Its not always easy and we’re far from where I’d like us to be. For a start, recycling is sorted and collected every Tuesday. We decided to lay down bamboo floors, after a few months of weighing up the possibilities, as a sustainable option in the long run (the three month journey across choppy water that they made, was also factored in), our water is heated by the most eco-friendly solar heating system we could find in the Cape and we grow our own herbs (though admittedly, I need to pay more attention to them). The grey water system I wanted installed did not quite pan out.
I find it heartwarming  that so many people are trying to do their bit. At the end of the day if all the little people did a little bit, there could be a big change for the better.
Or we could all go to the drive through, buy a Big Mac, chips and shake and go home to pass out in front of Idols.

*I used a point and shoot Sony camera, pics were taken at dinner time and are unedited*