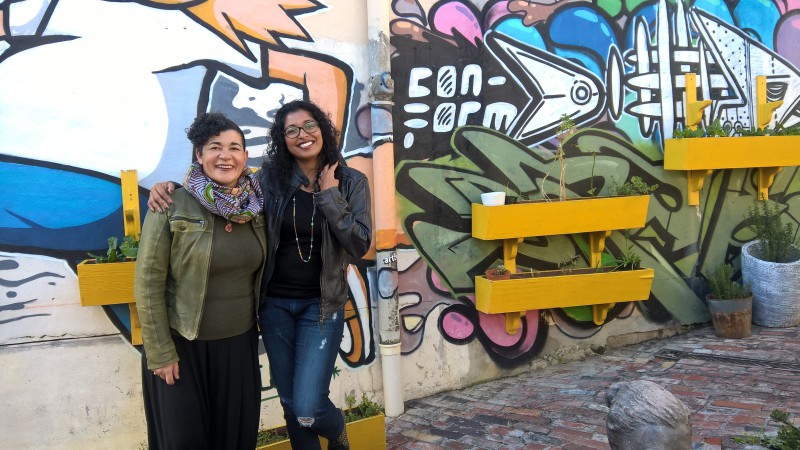 In one of my more exhilirating Saturday mornings (no lazing in fleecy P.Js with a cuppa and Twitter) – this one past to be precise, 26 July, I got to dash around my beloved Woodstock, elected a #YuccieCity (more about that in a mo) for Skyscanner, as part of their second #24hPeriscope. Essentially, 24 travel bloggers based all over the globe from Brooklyn (can’t get Yuccie-er than that), to Stolkholm (oh wait – worthy contender), Osaka, Sydney and such took Periscope viewers on a virtual trip to gawk at the Yuccie-ist (hang tight, definition in a two seconds) bits of their cities or elected neighbourhoods. Each of us had an hour to live-stream to Skyscanner’s followers. That’s what you do with Twitter’s Periscope, in case you’re not a Yuccie, and may not have known. Don’t fear – I’ve ignored it for a year until now. And I am sadly not a true breed Yuccie. But I’ve got my own brand of swagger.

First up, what’s a Yuccie? Not a disturbing as you may imagine. A Yuccie is a Young Urban Creative. Clever, actually. And Woodtstock is undeniably full of them. This must mean hipster version 2.o – beards very optional.

We needed to whizz around, with little time between streams – I decided to pare it down to 5 streams. There was just so much to share – history, the vibe, aromas and tastes, but it really could only be a nugget of each. A superficial brush with Yuccie-ness at its best. There were some awesome people to meet us at each venue too. Capetonians really are so accommodating, and interested in sharing about our culture and city.

Woodstock is fascinating – not just because every international travel magazine has been watching the gentrification and transformation so closely, but because it’s a huge packet of contradictions, rough and smooth edges, rich and poor, opulence and crumbling buildings in need of TLC, squished side by side.

Most importantly, under the horrific apartheid regime, a system of racial segregtaion (which was only abolished in1994), Woodtsock was probably the only suburb in the Cape that was a “grey area” – meaning, there was no strictly enforced segregation of races here. It’s always been a hotbed for creativity and alternative thinking. And today – even more so.

1. Karen Dudley at Tribe Coffee Courtyard at The Foundry 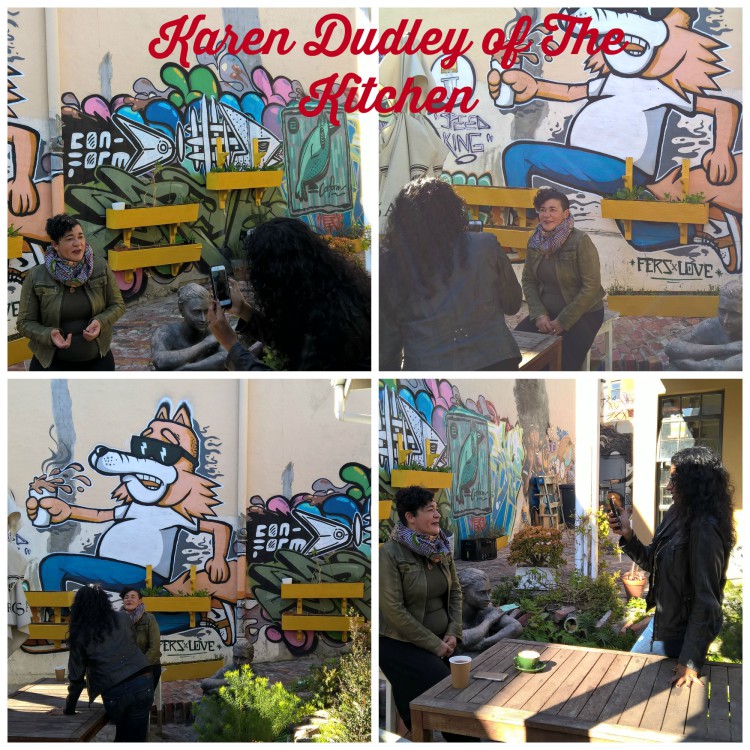 Karen Dudley of The Kitchen

When Karen Dudley and I met at the Tribe courtyard with its colourful mural art, cosily hidden from the crowds in Albert Street, Tribe’s very charming Jake Easton invited us to observe a group in a back room doing a morning “cupping”. It isn’t as kinky as it may sound. For those who don’t know, it’s a tutored coffee tasting. I promised to return another time.

We started our Woodstock session with Karen, a beloved local personality and chef at The Kitchen and The Dining Room who has lived in Woodstock most of her life. And to a great extent the Yuccies (and hipsters) in Woodstock owe a huge deal to creatives and dreamers, like Ms Dudley who sowed the seeds years before. Apologies – these Periscope vids pop to the left of the screen…

Karen famously cooked for Michelle Obama, who loves her food. Watch the video to see what we asked Karen and how Periscopers responded.

Viewers were curious about what Karen had prepared for Mrs Obama, about her restaurants, and loved that she called Woodstock a “hub of creativity”. “Hub of creativity is the lovely thing I wanted to hear,” said @memesullaluna. Karen told us about a lovely old church nearby, designed by a female architect in the 19th Century, so we walked over to see that first in the next slot.

2. Lauren Fowler at The Woodstock Exchange 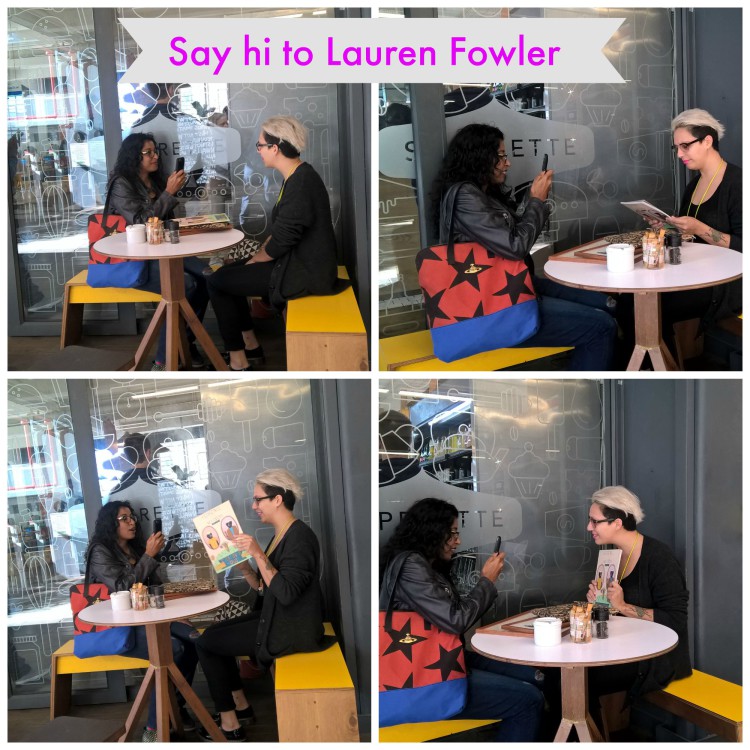 The stone church adjacent to The Woodstock Exchange painted a slick dark grey with cool type font, provides a great visual contradiction when compared to its surroundings – warehouses that show how industrial Woodstock once was, and still is to an extent, old houses and modern factory-style buildings too.

The guys who initiated the rapid gentrification of Woodstock back in 2006 opened Superette at The Exchange which serves only local, selected produce. I panned around the restaurant and met with illustrator and cross stitch enthusiast Lauren Fowler, who gave us a wonderful peek into her numerous fun sources for inspiration as well as some of her work, including an upcoming children’s book that she’s collaborated on with friends.

Lauren is, as one can see: proudly Yuccie and viewers loved her playful, colourful approach. Viewers wanted to know how to contact Lauren: www. laurenfowler.co.za

Interestingly, Lauren listed Karen Dudley’s The Kitchen as a place she adores in Woodstock. Karen had mentioned in her slot that she “feeds” many of the creatives in the area, and in a way they all feed each other. Inspiring! 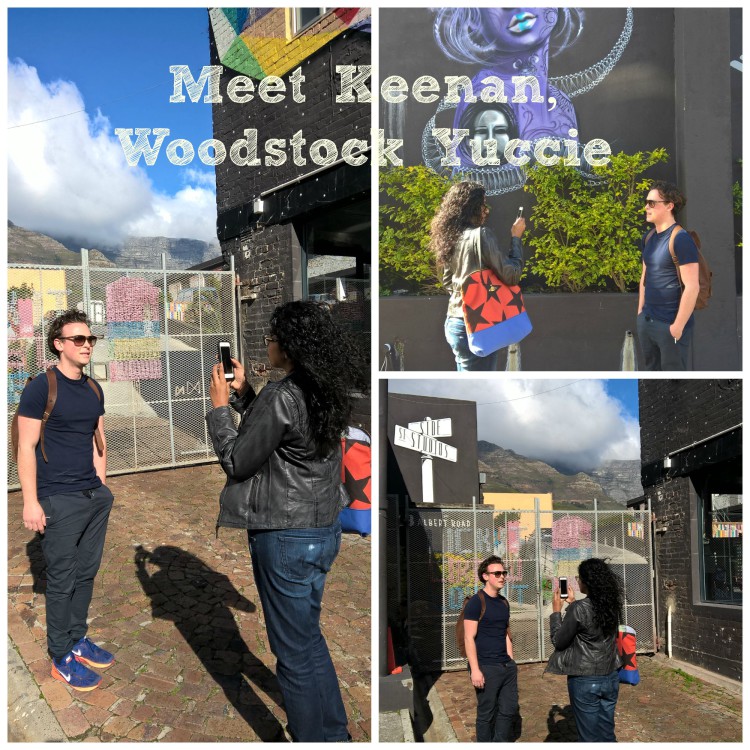 At 48 Side Street Studios (one of three in the area), a space for artists to work and live for free for short-term rentals, we took a look at some of the street art. Woodstock is covered in colourful murals and interesting graffiti – much of it social commentary about broader issues or interesting characters that locals have grown to recognise.

Keenan met me for a quick chat about why he lives in the area, and his choice to buy a property here, and his work as a Yuccie. Together with his girlfriend Natalie of Tails of Mermaid, Keenan spends much of his time in Woodstock and sees himself living in the area for many years yet. Keenan alluded to Woodstock with its very mixed ethnic and economic groups living in close proximity being an example of “hope” in Cape Town and an example in South Africa.

It’s a very good idea when in Woodstock to take a walking tour with a local street artist – they usually know everyone in the neighbourhood.

[for some reason, perhaps the wind that was raging a bit at the time – the visuals here are not clear. Such a pity as Amanda is an amazing personality. I went into the market alone, alas we couldn’t get behind-the-scenes images here. You’ll have to visit her in person]

The Neighbourgoods market was where this gentrification revolution started in 2006, and that was our next stop with #24hPeriscope. The market is located at the Old Biscuit Mill, which was once…. a biscuit factory

We passed by vendors selling clothes, crafts, leather goods, as well as bespoke and designer shops. I told viewers about Luke Dale Roberts’ Pot Luck Club, a small-plate fusion restaurant with 360 degree view up on the sixth floor (do not miss Sunday brunch here) –and The Test Kitchen, the best restaurant in the country, booked out until end Jan 2016 last I checked…

Amanda Lewis was waiting for us after the breakfast rush at her delightful store Saucisse Deli. It’s a place I love to come to for cheeses and meats. Amanda told us about the deli’s progress in becoming green and sustainable – the first in the area, and how Woodstockers are backing this. The deli is remarkably a plastic-free zone. She also told us about living working in a neighbourhood where she really feels cared for – everyone watches out for each other, she said. Amanda, in her signature style, prepared us an outstanding platter of the locally produced cheeses and meats. Too bad there wasn’t much time for more than a little nibble.

Thereafter Periscopers got a quick run-through to the entrance of the main Neighbourgoods food market. By this time our feet were a little sore and we worked up quite a thirst.

5. Neill Anthony at The Taproom at Devil’s Peak Brewery 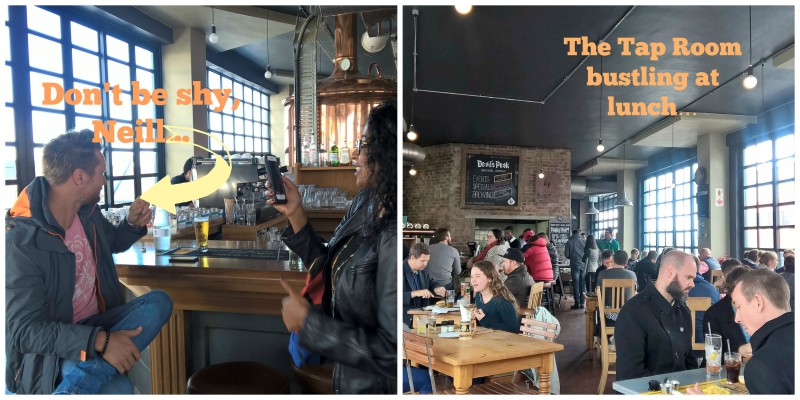 Exiting the colour, the aromas and chaos of the Neighbourgoods market, I bolted out the Old Biscuit Mill and into the zippy getaway car waiting for me and annoying the taxi drivers outside who hoard those prized spaces at the entrance. We zoomed up past the Salt River Circle and I started ‘scoping so viewers could enjoy the blue winter sky and the examples of contrast – small, very old houses wedged side-by-side next to warehouses taken over by creative agencies and artisanal ice cream parlours, for example.

I jumped out and got viewers to run up the stairs with me. Inside The Tap Room at Devil’s Peak Brewery – named so after the Devil’s Peak mountain in the background (which incidentally I climbed up for the first time the next day – huff, puff), was my friend chef and TV show star Neill Anthony.

Over crafty brews we caught up about his Woodstock – part of the first season of his very successful show Private Chef Neill Anthony was shot in his loft apartment in Woodstock. After a nip around the room (someone asked to see the view of the mountain), I bid the ‘scopers a toodleloo from gritty and glorious Woodstock.

Looking forward to so many more of you coming to visit Woodstock, a fun, complex and undeniably interesting #Yucciecity. Thanks Skyscanner for including us!

Disclaimer: Skyscanner engaged my services to represent Woodstock on the #24hPeriscope project. All views (including the flawed ones) are uniquely my own.