A Hot Air Balloon Safari in the Magaliesburg, South Africa

A Hot Air Balloon Safari in the Magaliesburg 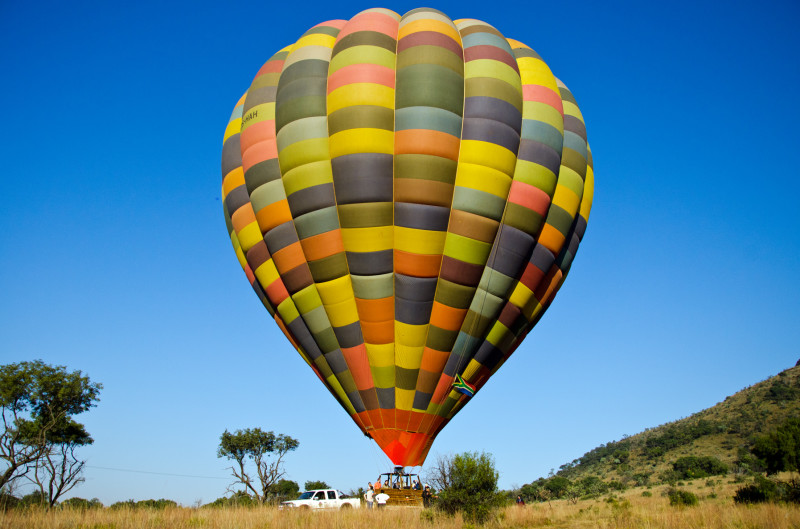 A flame roars, leaping in shades of iridescent indigo as a fan blasts air into the inflating multi-colored balloon envelop. We watch from a few meters away, warming our hands over cups of coffee at a wood fire. It’s six am now and some of us have been up at three thirty am, for the ride to Bill Harrop’s, one of the oldest hot air ballooning experiences in South Africa, having been established in 1981.

This piece was written for AFK Travel

Winter’s icy fingers brush over our noses and ears and we shiver, from the cold, and from anticipation. In our group, only one other has been in a hot air balloon before. But many have bungeed, parachuted out of planes and done tandem paraglides. I am probably the odd one out. Today, I have come face-to-face with an old foe – the fear of heights. 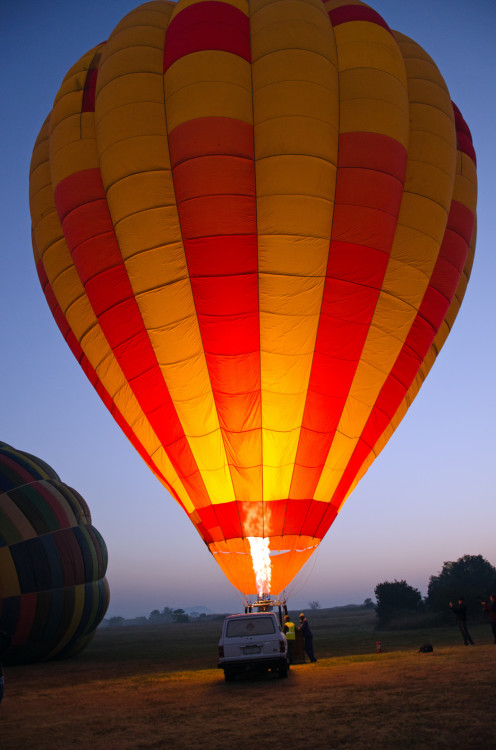 Compared to other adventure activities, hot air ballooning may seem tame to many – it holds the fairy-tale quality of exploration in its quaintest form. But for me, the idea of being exposed to the elements, with nothing but a thin basket between myself a rapidly growing distance to the ground, is terrifying.

I decide not to say too much and convince myself about the “safety in numbers” theory. That is, until my Brazilian friend Adriana tells us about two baskets of her countrymen who burned alive recently in a hot air balloon accident in Cappadocia. We scold her about the poor timing of her storytelling, and jump into the basket, packed in each of the four compartments with other eager and excited travellers.

I’m standing next to our group’s cameraman, affectionately named Daddy-K and am grateful for his calm personality.

Go-pro cameras are suspended onto hand-held extenders, cameras and phones are secured over necks and in pockets and well before takeoff, the selfies and group shots commence. 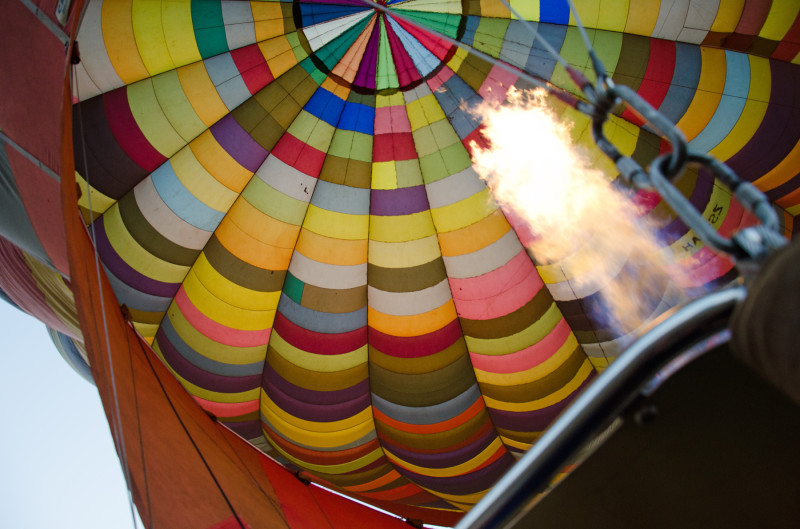 There’s a powerful whoosh of flames; we feel the heat and reel back. Ropes are loosened by the ground crew, and after a wobble, the basket starts to rise. It’s hard to imagine that this simple balloon, almost cartoonish with its colorful patchwork exterior is lifting 16 to 18 adults into the air, manned by a qualified pilot. We are, in the words of the singer R-Kelly’s crooning, flying.

Though not exactly detailed in Jules Vernes’ Around the World in 80 Days, the image of a hot air balloon and a grand adventure, such as the one set out on by the novel’s protagonist, Phileas Fogg, have become inextricable.

We float over the Magalies River Valley and spot the other balloons that have taken flight before and after ours. We wave to our colleagues; I, of course, hang on tight as I battle the sensation of weakness whacking me behind my knees. That the basket is solid and comes up to our torsos and is not made of see-through slats, is a heaven-sent to me – I am just not sure I would have managed to stand through the entire flight had it been different. 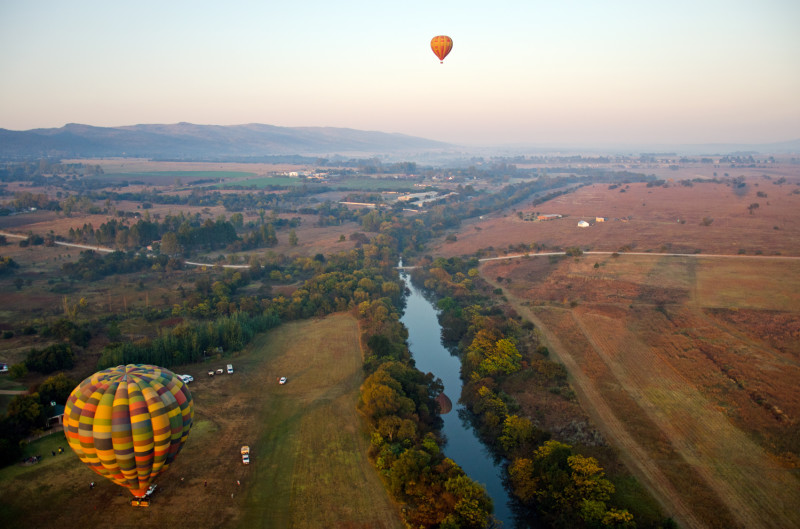 I say a silent prayer for the Brazilians who lost their lives when the balloon lowers and we glide over power lines at one stage.

As we continue to rise higher, there is silence. We smile at each other, but no one is saying much. Apart from the occasional blasts of firing-up from the pilot, you could hear a pin drop. We spot warthog and springbok, like miniature toy animals in the distance.

The morning air has a slightly misty quality and the reflection of our balloon in the river below replaces my sense of fear with awe. I decide to take a selfie, though I am not as brave as another friend who arches himself backwards out of the basket, grinning with confidence as he takes an endless stream of photographs and video footage.

The Magaliesburg region is renowned for the Cradle of Mankind at the Sterkfontein Caves, one of eight official World Heritage Sites in South Africa. It’s said that all of mankind originated here. Our pilot tells us a little about the area and points out wildlife. Cameras click and the air is crisp, and still.

An hour after takeoff we descend safely to the ground with a thump. The crew who come to fetch us, open a bottle of local bubbly. We celebrate the marvel of this unusual journey. I celebrate a step forward in conquering a crippling fear. 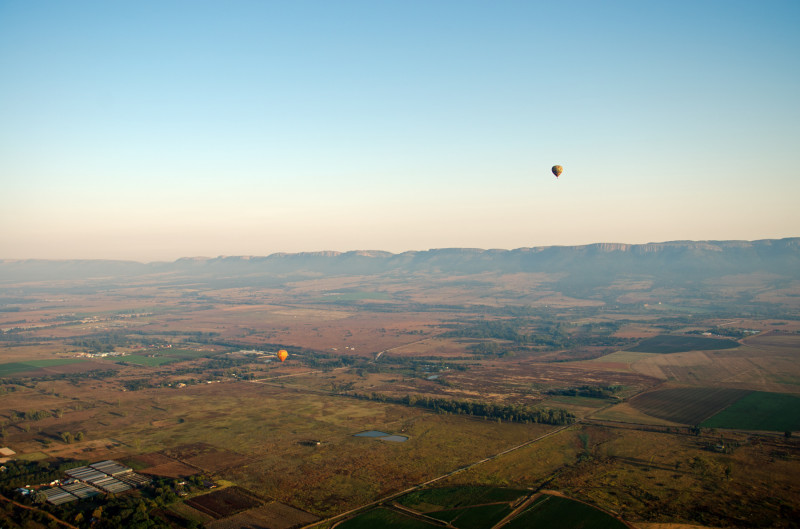 Back at the base, at the lovely Pavilion restaurant, a grand breakfast is set out. Mr Bill Harrop is there, reminding me of W.E John’s fictional character Biggles in the novels of the same name, with his cap and goggles atop his head. He is charming and insists we try the oats with dollops of cream and a generous glug of whiskey.

All of us intrepid travellers receive a certificate for our bravery, and I decide that I’m going to keep mine very safely.

At home, I tell my family about the adventure and show them the images I captured from that morning floating in a basket over the Magaliesburg.

We start to plan a new hot air balloon journey. 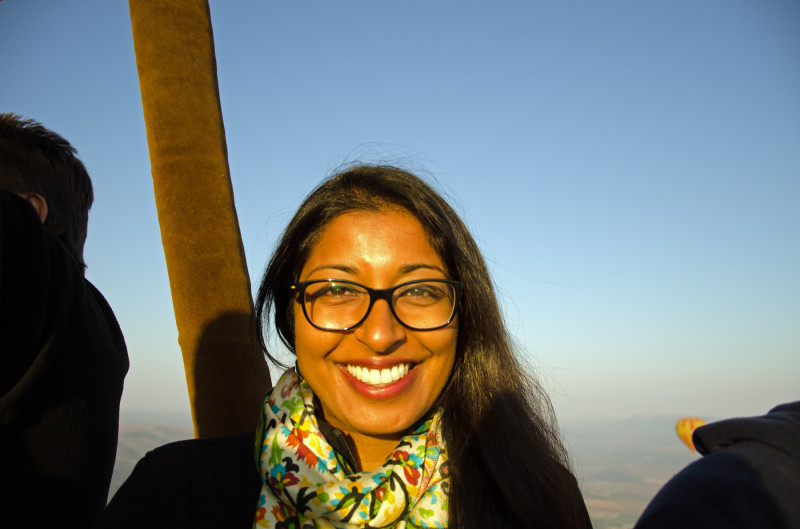 I need a drink!

This campaign is brought to you by the South Africa Tourism office and is supported and managed by iambassador. Food and the Fabulous, as always  maintains full editorial control of the content published on this site. Check out the campaign I did with iambassador on the beautiful island of  Mauritius.