Lunch at The Test Kitchen 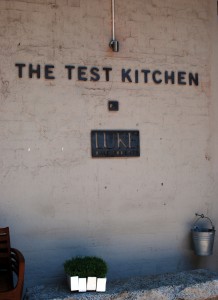 I have tried, over the past 4 weeks to cram in as many of the “must visit” Cape Town eateries, both formal and informal, before the year (and my budget) has officially expired.
These reviews do not appear in chronological order.

Luke Dale Robert’s The Test Kitchen is his independent venture after years as head chef of the award winning La Colombe restaurant and Cape Town foodies have been abuzz with praise and wonder over it. I was intensely curious as to why he’d move from a restaurant of such distinction into a smallish (30 seater) at the Old Biscuit Mill.
This is from the website:

“As its name implies, The Test Kitchen, though primarily a restaurant, affords Dale-Roberts the opportunity for maximum innovation as a chef, as well as being a space to use as ‘the creative hub’ for a variety of different projects, including regular cooking demonstrations. ‘It symbolizes a stage in a creative process,’ he explains. He chose The Old Biscuit Mill as the venue ‘because it is an aspirational area with a great community feeling’.”

We went in for a quick lunch and were treated to simple but flavourful fare, beautifully presented, freshly prepared (it’s always a joy to watch your food prepared in an open-plan kitchen) but without too much of a wait- just what you need when you have the next appointment to attend in 45 minutes. 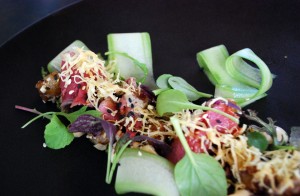 I chose two starters: the Asian style beef tataki (R60) and the vegetarian tempura roll (with shiitake mushrooms, pickled ginger and coriander) (R50). Both dishes were small. But together they made a good but not substantial lunch. It was sufficient for me considering I was attending the Societi Bistro summer menu launch later that day. 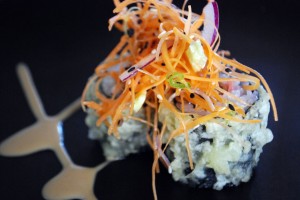 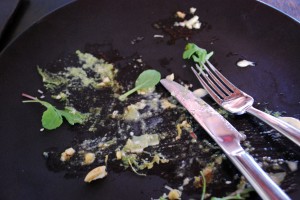 The beef tataki was my favourite and something I will return for.

My partner had the crispy duck bibimbab with hoison dressing and leaves (R95), one of three mains options available that day. He enjoyed it thoroughly. 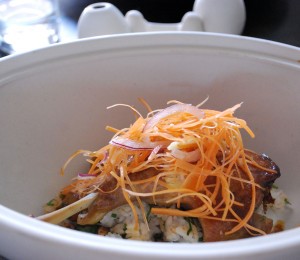 The prices, in my opinion, fall in the higher end bracket in this city, for ‘casual’ lunch time fare. However, you will be treated to the freshest, local organic produce, prepared and plated to the highest standards. Chef Roberts is in the kitchen, actively preparing the dishes with his Soux chefs. 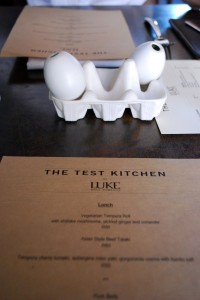 The Test Kitchen had all tables filled by the time our meals arrived- testament to the fact that people have bought into and support Luke Dale Robert’s vision. 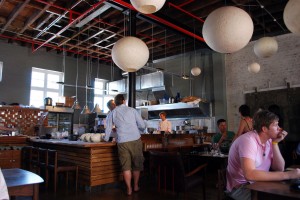