Zanzibar Food Culture – Beyond The Resorts

Beyond the glittery resorts in Zanzibar, Tanzania, we meet a family in a village who allow us a glimpse into Zanzibari food culture. For Business Day WANTED magazine, April 2016 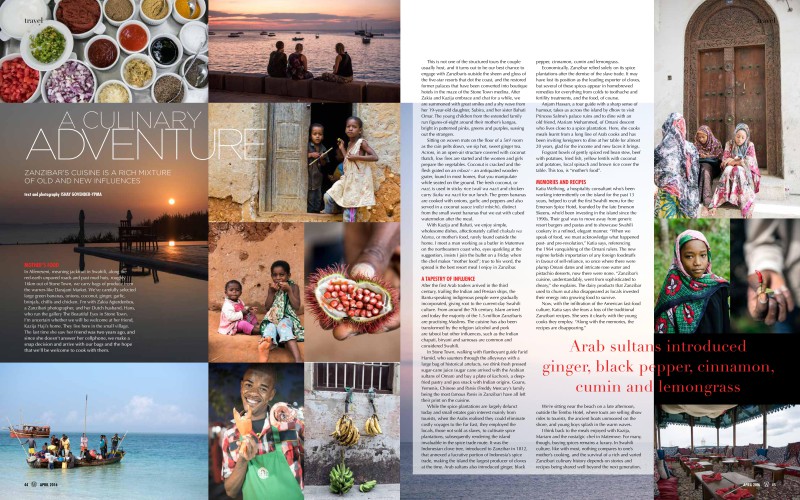 In the village of Alfeneseni, meaning jackfruit in Swahili, along the red-earth unpaved roads and past mud huts, roughly 16km out of Stone Town, we carry bags of produce from the warren-like Darajani Market. We’ve carefully selected large green bananas, onions, coconut, ginger, garlic, brinjals, chillis and chicken. I’m with Zakia Agterdenbos, a Zanzibari photographer, and her Dutch husband, Hans, who run the gallery The Beautiful Eyes in Stone Town. I’m uncertain whether we will be welcome at her friend, Kazija Haji’s home. They live here in the small village. The last time she saw her friend was two years ago, and since she doesn’t answer her cellphone, we make a snap decision and arrive with our bags and the hope that we’ll be welcome to cook with them. 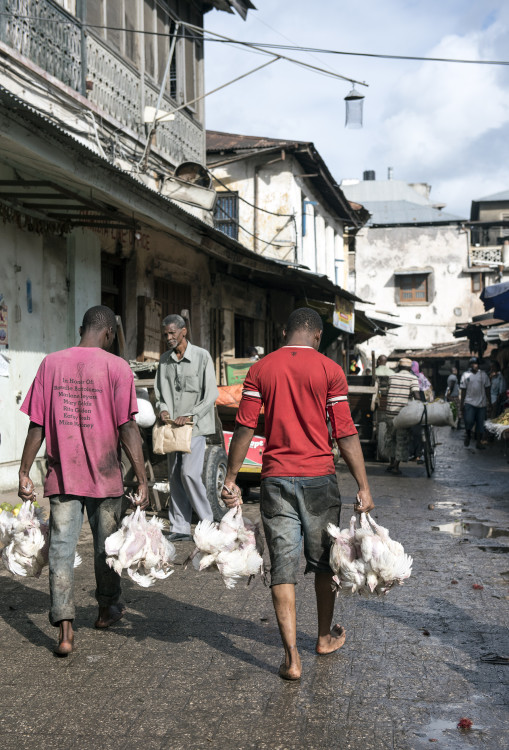 chickens at the market

This is not one of the structured tours the couple usually host, and it turns out to be our best chance to engage with Zanzibaris outside the sheen and gloss of the five-star resorts that dot the coast, and the restored former palaces that have been converted into boutique hotels in the maze of the Stone Town medina. After Zakia and Kazija embrace and chat for a while, we are summoned with great smiles and a shy wave from her 19-year-old daughter, Subira, and her sister Bahati Omar. The young children from the extended family run figures-of-eight around their mother’s kangas, bright in patterned pinks, greens and purples, sussing out the strangers. Sitting on woven mats on the floor of a 5m² room as the rain pelts down, we sip hot, sweet ginger tea. 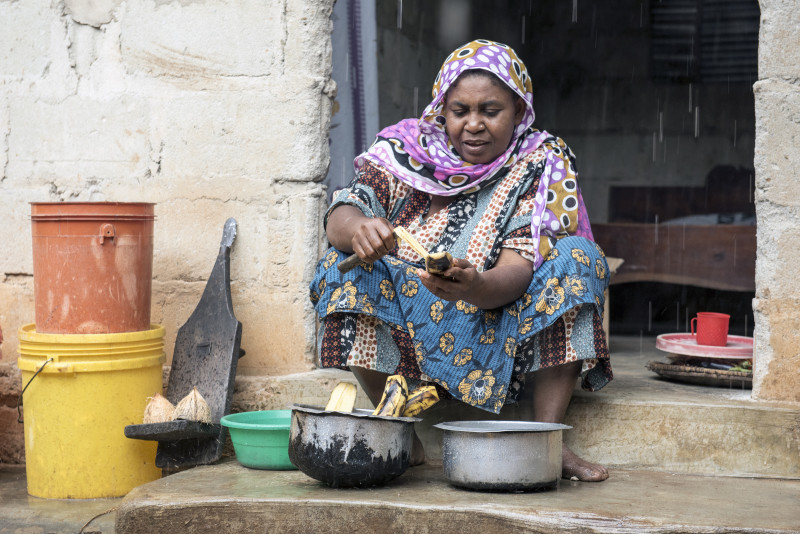 Across, in an open-air structure covered with coconut thatch, low fires are started and the women and girls prepare the vegetables. Coconut is cracked and the flesh grated on an mbuzi – an antiquated wooden grater, found in most homes, that you manipulate while seated on the ground. The fresh coconut, or nazi, is used in sticky rice (wali wa nazi) and chicken curry (kuku wa nazi) for our lunch. The green bananas are cooked with onions, garlic and peppers and also served in a coconut sauce (ndizi mbichi), distinct from the small sweet bananas that we eat with cubed watermelon after the meal. With Kazija and Bahati, we enjoy simple, wholesome dishes, affectionately called chakula wa Mama, or mother’s food, rarely found outside the home. I meet a man working as a butler in Matemwe on the northeastern coast who, eyes sparkling at the suggestion, insists I join the buffet on a Friday when the chef makes “mother food”; true to his word, the spread is the best resort meal I enjoy in Zanzibar. 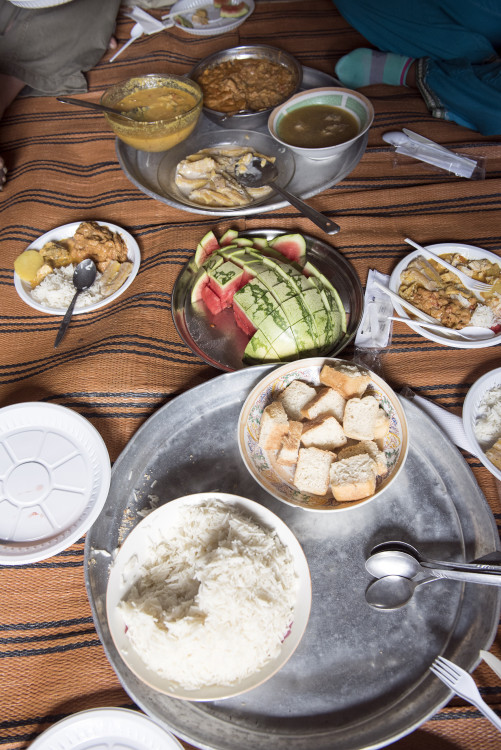 A TAPESTRY OF INFLUENCE

After the first Arab traders arrived in the third century, trailing the Indian and Persian ships, the Bantu-speaking indigenous people were gradually incorporated, giving root to the current-day Swahili culture. From around the 7th century, Islam arrived and today the majority of the 1.5-million Zanzibaris are practising Muslims. The cuisine has also been transformed by the religion (alcohol and pork are taboo) but other influences, such as the Indian chapati, biryani and samosas are common and considered Swahili. 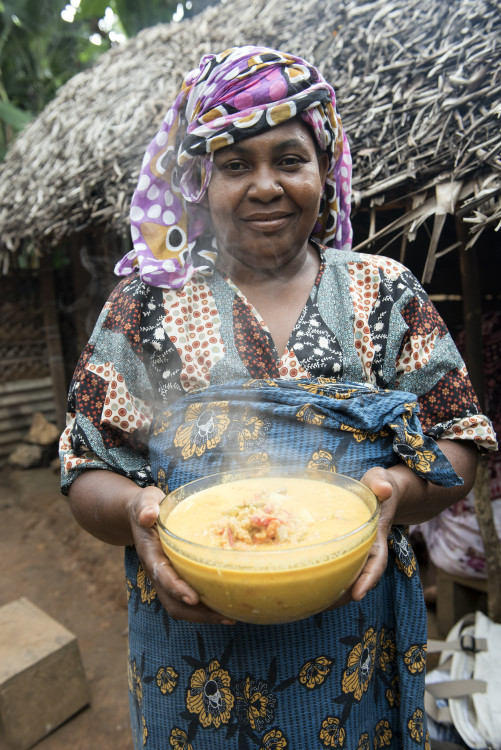 In Stone Town, walking with flamboyant guide Farid Hamid, who saunters through the alleyways with a large bag of historical artefacts, we drink fresh pressed sugar-cane juice (sugar cane arrived with the Arabian sultans of Oman) and buy a plate of kachoris, a deep-fried pastry and pea snack with Indian origins. Goans, Yemenis, Chinese and Parsis (Freddy Mercury’s family being the most famous Parsis in Zanzibar) have all left their print on the cuisine. While the spice plantations are largely defunct today and small estates gain interest mainly from tourists, when the Arabs realised they could eliminate costly voyages to the Far East, they employed the locals (those not sold as slaves), to cultivate the spice plantations. This move rendered the country invaluable in the spice trade route. It was the Indonesian clove tree, introduced to Zanzibar in 1812 that annexed a lucrative portion of Indonesia’s spice trade, making the island the largest producer of cloves at the time. Arab sultans also introduced ginger, black pepper, cinnamon, cumin and lemongrass. Economically, Zanzibar relied solely on its spice plantations after the demise of the slave trade. It may have lost its position as the leading exporter of cloves, but several of these spices appear in home-brewed remedies for everything from colds to toothache and fertility treatments, and the food, of course. 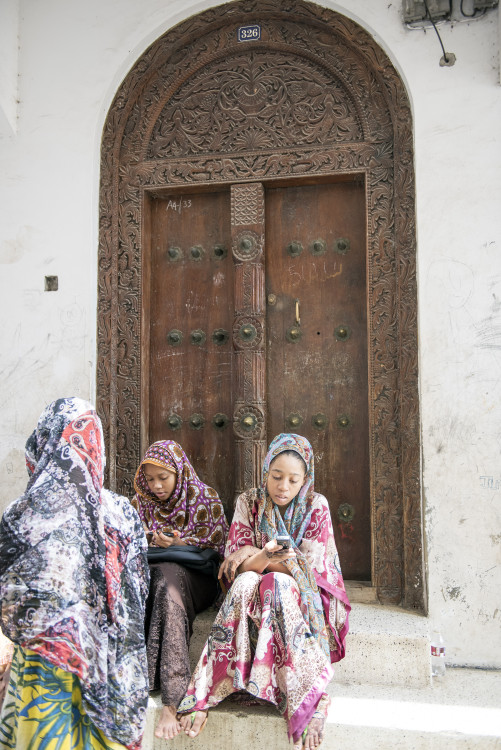 Gathering in the maze of Stone Town

Anjam Hassan, a tour guide with a sharp sense of humour, takes us across the island by dhow to visit Princess Salme’s palace ruins and to dine with an old friend, Mariam Mohammed, of Omani descent who lives close to a spice plantation. Here, she prepares dishes learnt from a long line of Arab cooks and has been inviting foreigners to dine at her table for almost 20 years, glad for the income and new faces it brings. Fragrant bowls of gently spiced red bean stew, beef with potatoes, fried fish, yellow lentils with coconut and potatoes, local spinach and brown rice cover the table. This too, is “mother’s food”. 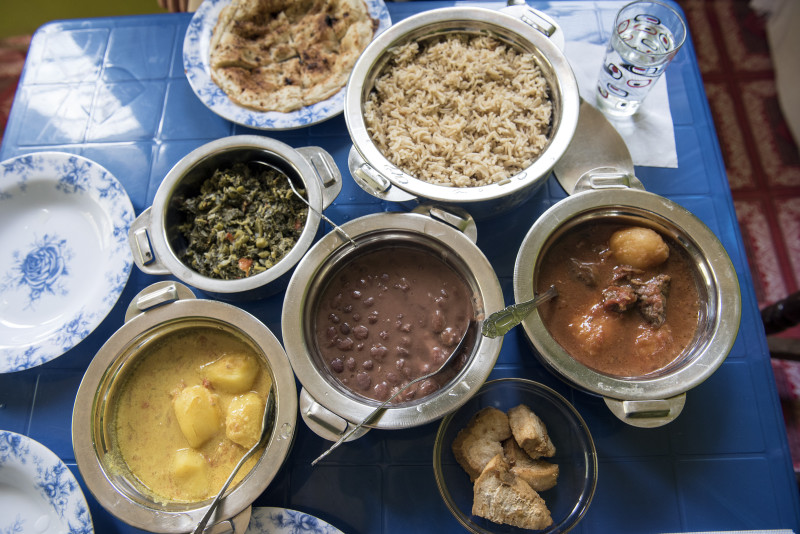 Katia Wellving, a hospitality consultant who’s been working intermittently on the island for the past 13 years, helped to craft the first Swahili menu for the Emerson Spice Hotel, founded by the late Emerson Skeens, who’d been investing in the island since the 1990s. Their goal was to move away from generic resort burgers and pastas and to showcase Swahili cookery in a refined, elegant manner. “When we speak of food, we must acknowledge what happened post- and pre-revolution,” Katia says, referencing the 1964 vanquishing of the Omani rulers. The new regime forbid importation of any foreign foodstuffs in favour of self-reliance, so once where there were plump Omani dates and intricate rose water and pistachio desserts, now there were none. 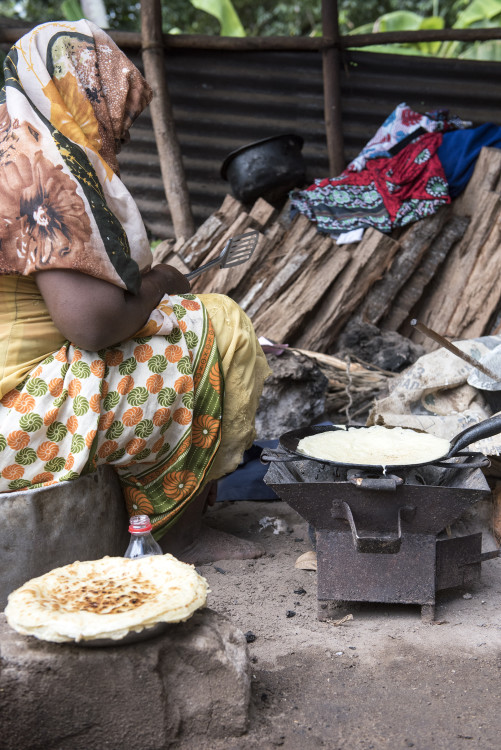 breakfast in the village

“Zanzibar’s cuisine, understandably, went from sophisticated to dreary,” she explains. The dairy products that Zanzibar used to churn out also disappeared as locals invested their energy into growing food to survive. Now, with the infiltration of the American fast-food culture, Katia says she fears a loss of the traditional Zanzibari recipes. She sees it clearly with the young cooks they employ. “Along with the memories, the recipes are disappearing.”

We’re sitting near the beach on a late afternoon, outside the Tembo Hotel, where touts are selling dhow rides to tourists, the ancient boats unmoored on the shore, and young boys splash in the warm waves. I think back to the meals enjoyed with Kazija, Mariam and the nostalgic chef in Matemwe. For many, though, buying spices remains a luxury. In Swahili culture, like with most, nothing compares to one’s mother’s cooking, and the survival of a rich and varied Zanzibari culinary history depends on stories and recipes being shared well beyond the next generation. 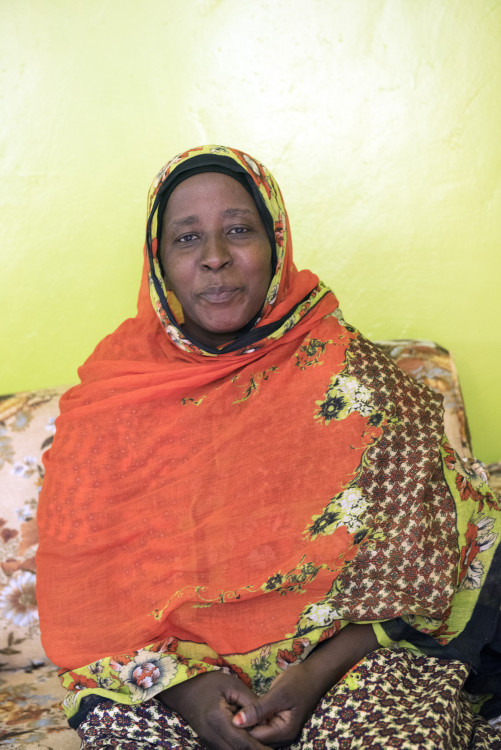