Jamaican Jerk – a Food Guide Around the Island 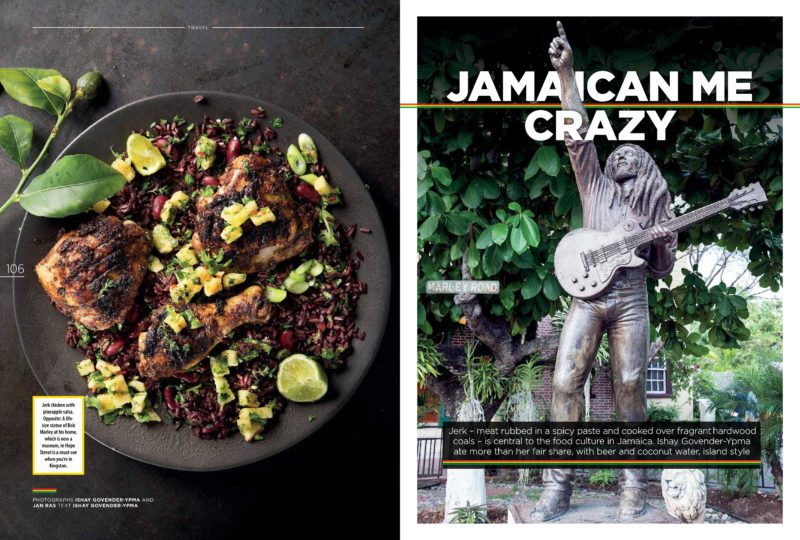 “I DON’T EAT IT, but I’ll jerk it for the people,” Nikuma Carl smiles. As the principle farmer, he runs Life Yard, Kingston’s first urban eco-village, a skinny functional garden, juice bar and after-care hub for school children in Parade Gardens, one of its most impoverished neighbourhoods (called “projects”).  A Rastafari [note this term is used, as Rastafarian denotes a religion and they object to the term; but it’s at your discretion] man, he adheres strictly to the I-tal diet, which is plant-based and contains no salt, unless naturally occurring. But jerk in Jamaica is undeniably popular, so in the afternoons and on weekends, Carl will light the grill fashioned from a spilt metal drum, baste chicken with a piquant jerk rub and “jerk” it over a fire. Traditionally jerk meats are grilled over fragrant pimento, the same tree from which Jamaican allspice is derived, but availability had become scarce. Within this ribbon of joy created by Life Yard, in a neighbourhood that sees its share of violence and neglect, bright murals adorn the zinc fence and neighbouring walls and judgement about eating habits, and most life choices, are left at the gate. Jerk, the quotidian aroma of which wafts tantalisingly throughout the Caribbean, is used freely as noun, adjective and verb, I learn. And, handily, it refers to the seasoning, grilling technique and scrumptious end–product.

Boston Bay, on the east end of the island is known as the home of jerk, but I start my journey in the cultural and capital city, Kingston. In fact, many visiting from the U.S will fly directly to the beach resort town of Montego Bay and avoid Kingston, with its grit, clamour, rambunctious street dance parties and the relentless hustle. Karen Hutchinson, founder and lead guide at Jamaica Cultural Enterprises takes me on a two-day private tour, familiarising me with the history of the first inhabitants…