Across an enchanting landscape of mountains, plains, rivers and ancient ruins, Ishay Govender-Ypma feasted on the flavours of the Alentejo, the breadbasket and wine barrel of Portugal. Written for SAA Sawubona inflight magazine, 21 July 2017 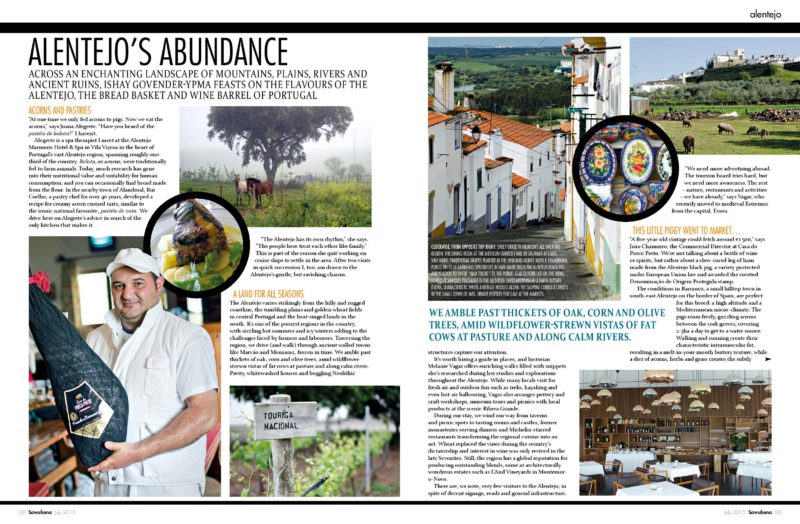 “At one time we only fed acorns to pigs. Now we eat the acorns,” says Joana Alegrete. “Have you heard of the pastéis de bolota?” I hadn’t.

Alegrete is a spa therapist I meet at the Alentejo Marmoris Hotel in Vila Viçosa in the heart of Portugal’s vast Alentejo region spanning roughly one-third of the country. Bolota, or acorns were traditionally fed to farm animals. Today, much research has gone into the nutritional value and suitability for human consumption, and you can occasionally find bread made from the flour. In the nearby town of Alandroal, Rui Coelho, a pastry chef for over 40 years, developed a recipe for creamy acorn custard tarts, similar to the iconic national favourite, pastéis de nata. We drive here on Alegrete’s advice in search of the only kitchen that makes it.

“Alentejo has its own rhythm,” she says. ”And the people here treat each other like family.” This is part of the reason Alegrete quit the cruise ships to settle in the area. After two visits in quick succession I, too, am drawn to the Alentejo’s gentle but ravishing charms.

A Land for Many Seasons

The Alentejo varies strikingly from the hilly and rugged coastline, the central tumbling plains and golden wheat fields, to the heat-singed lands in the south. It’s one of the poorest regions in Portugal with sizzling hot summers and icy winters adding to the challenges faced by farmers and labourers. Traversing the region, we drive (and walk) through ancient walled-towns like Marvão and Monsaraz, frozen in time. We amble past thickets of oak, corn and olive trees, and wild-flower strewn vistas, fat cows at pasture and along calm rivers. Pretty whitewashed houses and boggling Neolithic structures capture…