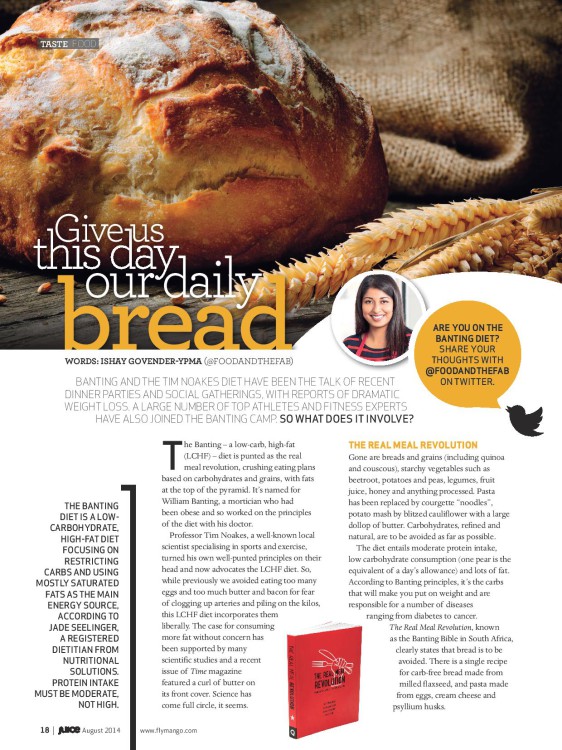 An introduction to Banting: Is there room for bread?

Banting and the Tim Noakes diet have been the talk of almost every dinner party and social gathering I’ve attended in the last few months. A number of friends and Twitter followers have confirmed that this has been their experience too. Many in our circles on the diet have reported dramatic weight loss. A large number of top athletes and fitness experts have also joined the Banting camp and are extolling its virtues.

What does the Banting diet entail? According to Jade Seelinger, a registered dietitian from Nutritional Solutions “[It’s] a low carbohydrate, high fat diet focusing on restricting carbohydrates, and using fats (mostly saturated fats) as the main energy source.” Protein intake must be moderate, not high.

Also known as the LCHF diet, it’s punted as the “real meal revolution”, crushing the principles established in the 70’s around a diet composed of mainly carbohydrates and grains at the base of the pyramid, and what was believed to be potential heart-attack inducing fats, at the top. William Banting, a mortician who had been obese all his life worked on the principles of the LCHF diet with his doctor.

Professor Tim Noakes, a well-known local scientist specialising in sports and exercise, plagued by adult-onset diabetes, turned his own well-punted principles on the head, and now advocates the LCHF diet. So, while previously we avoided eating too many eggs, butter, bacon and other fats for fear of clogging up the arteries and piling on the kilos, this LCHF diet incorporates it liberally. The case for consuming more fat, without concern has been supported by many scientific studies and a recent issue of Time magazine featured a curl of butter on its front cover. Science has come full circle, it seems.

Out the window are all breads and grains (including quinoa and couscous), starchy vegetables like beetroot, potatoes and even peas, beans, legumes like peanuts, fruit juices, honey and anything processed. Pasta has been replaced by courgette “noodles”, potato mash by blitzed cauliflower with a large dollop of butter. Carbohydrates, refined and natural, including fruits and some vegetables are all to be avoided as much as possible when following the LCHF diet correctly. Mixing and matching principles will backfire and you will balloon, warns Professor Noakes.

The diet entails moderate protein intake (unlike the high-protein diets of the ‘90s), very low carbohydrate consumption (one pear is the equivalent of the day’s allowance) and lots of fat – eat all the chicken skin and the fat on the lamb chop, they say. According to the Banting principles, carbohydrates, and not fat will make you put on weight, and are responsible for a number of diseases from diabetes to cancer.

So, what about bread?

The book, The Real Meal Revolution (Quivertree), known as the “Banting Bible” in South Africa, sets out very clearly that bread is to be avoided. There is a single recipe for “carb-free bread” made from milled flaxseed, and pasta made from eggs, cream cheese and psyllium husks.

Has the increase in Banting-adopters meant more people avoid the breadbasket at restaurants? It’s a trend that chefs like Michael Broughton of award-winning Terroir restaurant at Kleine Zalze has noted.

Michael is a passionate bread-baker, who has gone to great lengths to perfect the art. He’s grown a sourdough starter, affectionately known as Sandy, who will turn nine years old soon. Every year she is celebrated in the kitchen, and is the reason Terroir’s sough dough bread rolls have the depth of flavour they do.

“Each year she gives more flavour to the overall profile of the bread,” he says.

While the requests for LCHF meals and various food restrictions are on the rise at Terroir, Michael does not subscribe to the diet.

“I think the diet is very radical but then again I don’t come from an adult onset diabetes mindset. [LCHF] is becoming increasingly popular. My family and I ascribe to the creed: ‘one plate will feed you, the second will kill you’,” he says of his views on moderate eating.

He credits his good physical condition to this principle of eating all foods in moderation, and exercise.

From a dietetics perspective, Jade believes bread can be included in a balanced diet, but with moderation, “Opt for a high fibre, whole wheat option, or rye bread about 2 – 3 times weekly.  I would however recommend more nutritious options such as brown rice, corn on the cob, bulgur wheat, baby or sweet potatoes.”

Several bakeries in Cape Town have long-adapted to the Paleo diet that swept the city, by including gluten-free goods. It’s uncertain how the popular Banting diet, which precludes bread and pastries, will affect their sales.

There are several medical and scientific professionals who oppose the Banting diet, mainly because of a lack of long-term evidence on heart health.

Jade adds, “Firstly, there is simply not enough evidence supporting this diet as a healthy weight-loss option. Secondly this diet is expensive with the high fat and high-quality protein component of the diet, and [is] in my opinion unsustainable. The potential health risks of following this diet is [a] increase in cholesterol and risk of heart disease, inflammation from a high intake of saturated fats and constipation from low fibre content. Regardless of the diet you choose, if kilojoule intake is restricted, weight-loss will happen. So why not consider sustainability and health when choosing your eating plan?”

The Carb Sane Asylum website (www.carbsanity.blogspot.com) has picked apart Banting’s Letter of Corpulence, upon which the diet is based. Banting avoided milk, butter, beer and pork, which he felt contributed to his obesity, but did eat a few slices of toast daily. He also consumed seven glasses of alcohol a day.

Noake’s book has a clear paragraph setting out that the diet in no way condones drinking wine or any alcohol, which is “toxic”. It’s interesting that many who have adopted Banting say they’d give up cake and chocolate because now they can indulge in bacon and wine every day

Apart from the usual initial withdrawal symptoms one can expect when on a detox or carb-curb, a factor one needs to consider is the cost of this diet. Grass-reared beef, free-range chicken, organic vegetables, butter, cheese, health-shop flax seeds, nuts and coconut oil (never seed oils, they warn) are the staples.

And, can you sustain this diet long-term? 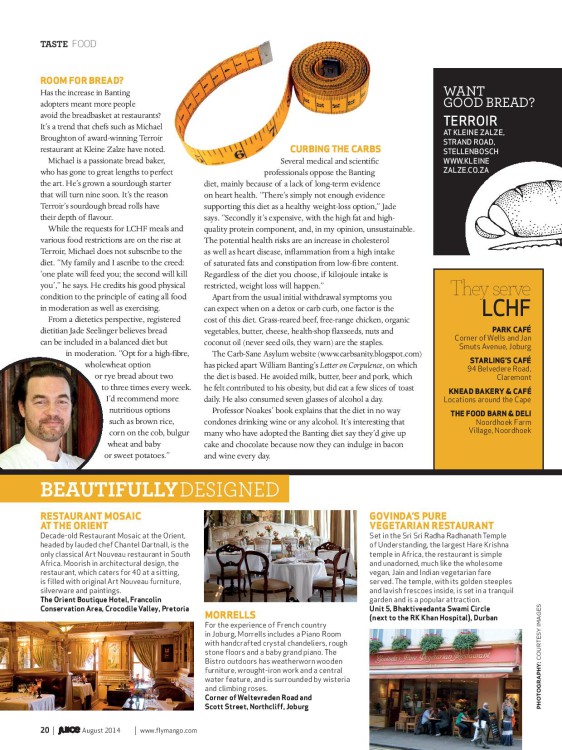