Retracing my university days in the university town. For Mail & Guardian, July 2016. 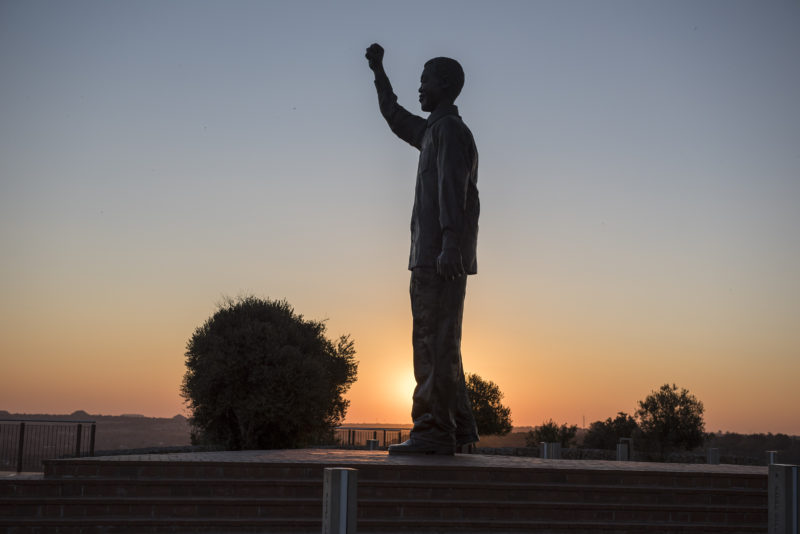 A decade can fall between the cracks, as effortless as an autumn leaf floating to its unremarkable end in the backyard. Those are the more than 10 years between Bloemfontein and I. I return to the city that saw me transition between my teens and adulthood in the late 90s, through two degrees and a career switch, just a few weeks ago. I can’t say for certain why I’ve never returned, though I’ve thought about it for years. For me, Bloemfontein serves as a gateway between childhood and adulthood, a place between places. We all have our in-between towns, someone reminds me when I post about this on Facebook.

I promise my husband that I will return someday, with him in tow, and it’s fortuitous that we can share this together now. His patient eyes map the steps of things once so familiar to me, from a distance, offering a nod of encouragement when I look back, the past and present colliding in a way that unsettles me. I am not prepared, still.

On the first afternoon, we rush from a smallholding outside Bloemfontein where I’m working for the day, to catch the sunset up the steeply winding roads at the top of Naval Hill. This is where the British once stationed their naval guns during the Anglo-Boer war. The roads are paved now, I realise, anticipating the shudder of gravel we knew back then. In my student days, City Golfs, Fiat Unos and the odd Golf GTi kitted with 20-inch rims, would park here after a night of clubbing, the bass thrumming from their interiors. We were too young then to romanticise over sunsets. Watching the sunrise like orange gauze, it bled over the expanse of the city from way up here, where we felt small but our futures loomed infinite. The city too, seemed large, efficient, well tended. We were, many of us, kids from small towns, the dorpies, the back roads –Eshowe, Maritzburg, Springbok, Prieska. 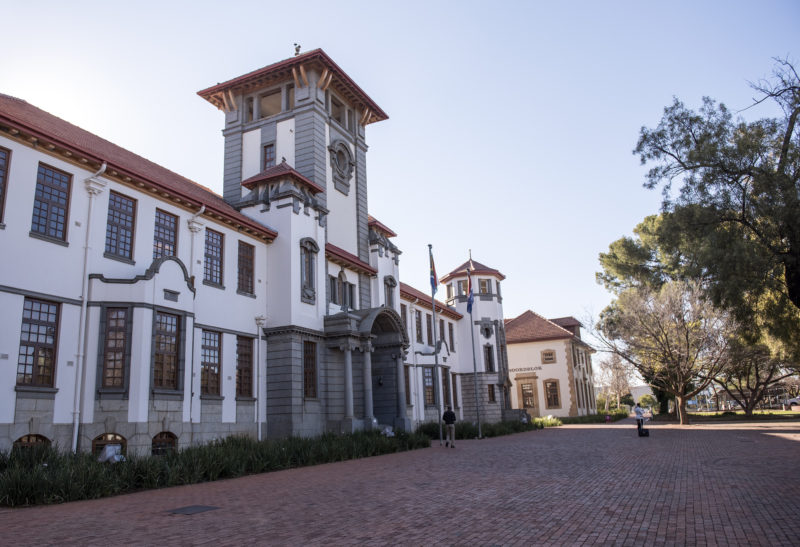 The conversation on those early mornings, Jennifer Page’s Crush carrying on the air at some point, was animated; we shivered under borrowed bomber jackets, the guys drinking the last of the beers from their car boots, the amorous couples steaming up windows. There was talk of Satanism rituals taking place in the dark folds of Naval Hill, a dormitory’s cat stolen and decapitated as a warning to us all; the illuminated cross shone down upon the city like a beacon of salvation keeping us out of harm’s way.

Now, I see for the first time with my own eyes (I’d seen so many Instagram pictures and articles by friends), the gargantuan statue of Madiba, taking a step towards the ledge, smiling in benevolence, the people’s hero. To a degree, I am glad we didn’t have his magnificence bear witness to the occasional couple who took their backseat pursuits to the bonnet, where we would stare and recoil in horror simultaneously. I share the agonising details with my husband. I feel him sizing me up, the girl I once was, the woman I am today. “That’s an awesome sunset,” he says finally. The next day we walk up Naval Hill with other exercising couples in the pleasant winter sunshine – I’d never seen anyone walk or run up the hill when I was a student.

There are memories, of course, that no else can piece together, or reminisce over, dissecting the minutiae with me. There are spaces left where friends and lovers once stood, gone now, and I reach my hands out to trace the missing outlines. I spend an afternoon walking around the university’s campus alone. Much like the city, now, it seems small and since my visit coincides with the June vacation, it’s eerily desolate. When I arrived in 1997, one of a few people of colour from Kwa-Zulu Natal, I’d get lost on the way to the cafeteria. I realise now how little I knew back then, about people and spatial configuration. 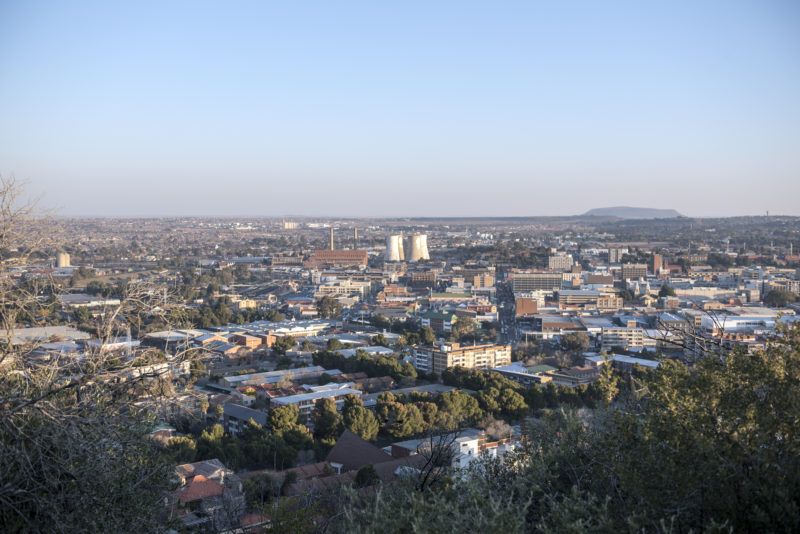 I peek inside my first year dormitory: dark wood, initiations, mandatory telephone duty, secret codes to alert fellow residents if a man comes calling (‘voordeur’) or a woman (‘voorportaal’). House meetings you couldn’t bunk, strict curfews that we’d sometimes evade by staying weekends with a kindly friend in a senior dormitory where there the rules were few but the residents seemed as old as our mums. Every morning I’d get a ‘voordeur’ call while still in the shower, my new gay best friend and I would scoot off to classes, him composed and engergised, me wild eyed with just-shampooed curls drying as we slid into the lecture hall seats, just in time. The food was an education too– plain mince, mash, boerewors, pap, chicken à la king when we were lucky. To my relief, and that of the growing crowd who’d gather in my room at lunch time, my mother would courier parcels of frozen food on the Greyhound bus, expertly wrapped by my father– it would arrive smelling strongly of curry and home, but still frozen. 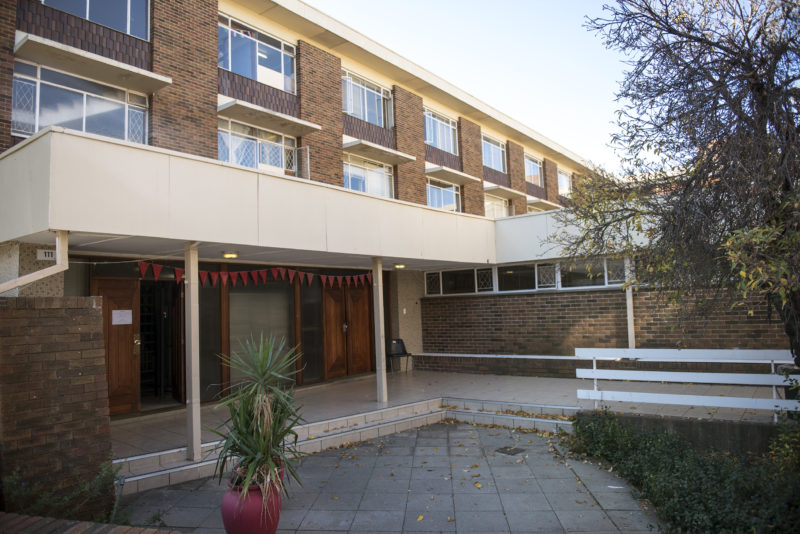 As a student in Bloemfontein, there were the social and political threads that ran through everyday life that I might have dealt with differently if I knew then, what I know now. Jonathan Jansen would only be elected vice chancellor in 2009, by which time I’d long left, worked, planted roots in Cape Town and married. Oprah was yet to enter the Callie Human hall to receive her honorary doctorate. At one point during my first year I had to leave campus for a few weeks – racial tensions had mounted to a level where black girls could not be guaranteed safety. My parents decided not to delve into what that could mean, neither did I, and promptly moved me to a guesthouse nearby, at added cost they hadn’t budgeted for.

When one of my best friends from Pietermaritzburg visited me and I guided her across the streets from the Reitz men’s hostels (we knew better than to walk past those students), a move my well-built Zulu classmate Struben also mimicked, she was startled. How was I to explain – you did what you needed to, to keep your black body safe. Years later, when we’d both switched fields of study, Struben would tell me how he’d often have a stone kept hidden in hand “just in case”, when the Reitz guys would cruise by in bakkies, drinking beers. When Jansen was attending to the mayhem caused by Reitz students who had humiliated and traumatised the black women who cleaned their rooms, I had no doubt that they were capable of the acts. “You’re not like them,” I was told one rainy day, when I took a lift to the medical facility with a car full of white girls, daughters of wealthy farmers, and the country’s future doctors. Seething mixed with bile and I kept my head down the entire way. Holocaust survivor Elie Wiesel in Night intimates that it isn’t just the strongest or smartest who will survive, but those who can adapt to change. Women from one residence considered “black only” – campus authorities separated us for “cultural” reasons in 1997, wore fierce purple t-shirts that read: Adapt or Die. They were wiser than many. 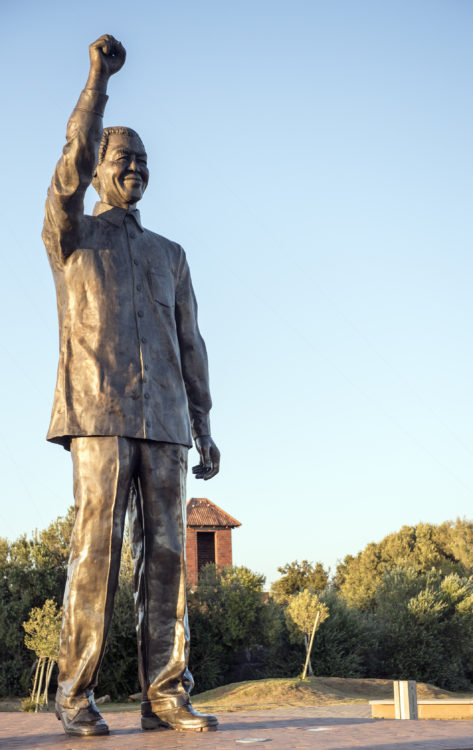 In Bloemfontein, I was never short of love and friendships though, many of which endure to this day. I’d experienced the most profound first love any one could wish for, a friendship that lasted beyond university.

I notice how large Mimosa Mall is now and remember the Pick ‘n Pay trolleys some students would push back to campus with supplies of Cheese Curls, rusks, coffee, Cremora, tinned tuna and Provitas. The gym at Loch Logan Waterfront I went to five times a week during a gruelling Masters degree has vanished, so has the Barba’s Café where 5FM D.J.s like Mark Gilman humoured our desperate, writhing bodies. Mine, one of a handful of black faces in the crowd.

My friend Richard, a Masters drama student at the time, remains faithfully ingrained in my memory. He’d wanted to borrow my Doc Martens once, and having begged my parents for them when I was a teen, I didn’t comply with his request. I fed him instead and he told me about a man he was excited to meet, who was coming down to Bloemfontein, to take their connection beyond the text message contact they’d had until then. Richard’s brutalised body was found the next morning, the killer vanishing without trace. I carry the heartache for Richard, always gentle, the life of any of our parties, to this day.

The passing of time has readied me somewhat, and I walk along the street where they’d found his body, and replay the many times in my dorm room, where I’d listen to his dreams of “busting out of here”, to Amsterdam, to anywhere. They were dreams all of us in the circle shared, and I say Richard’s name repeatedly as the Bloemfontein sun brushes my back.