Eat Out Conference 2012: Interview Margot Janse Chef of the Year 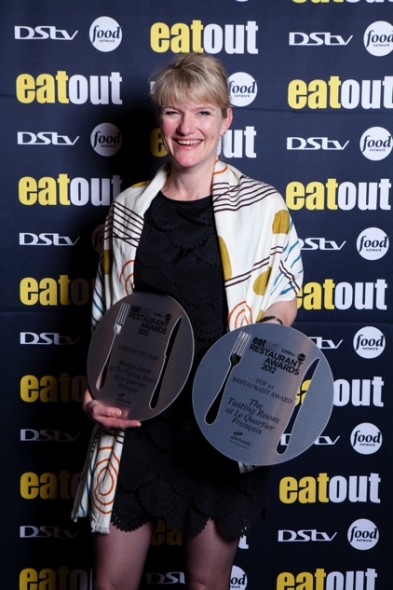 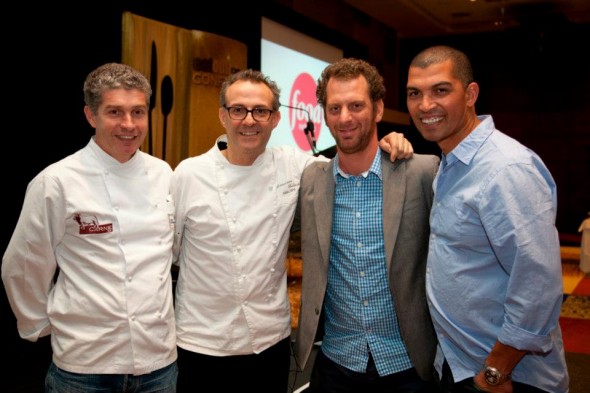 The crowd was a mix of media- journalists and bloggers, writers, chefs, television and radio personalities and food lovers. At R1000 for a day event the conference was steep by local standards. I was invited to attend, which I felt most fortunate about, toying with paying the money for the conference or the awards the next day (R1600) for a few weeks already.

What they had to say 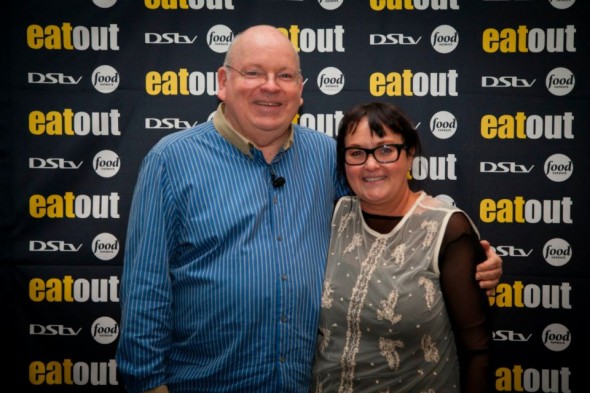 Michael Olivier and Abigail Donnelly – pic courtesy of Eat Out

Well known food personality, our local ‘food and wine guru‘ Michael Olivier was the perfect host and emcee – so very well steeped in local food and wine knowledge and always a delight to listen to.

The event officially opened to the appreciative murmurings of the crowd as 2011 Chef of the Year Luke Dale Roberts presented a talk on ‘Food for thought and thought for food’. The talk focussed on his inspirations, a recent chef’s dinner hosted by the legendary Alain Ducasse, a man held in very regard by Dale Roberts and his journey in refining his ideas that ultimately appear on the plate. The audience was treated to video material representing a day in the life of The Test Kitchen – a vibey, high energy production. The next night Luke Dale Roberts and his The Test Kitchen won the 2012 Eat Out Restaurant of the year award – two years in a row. Now, I am aware of the squabbling and discontent amongst  media and restaurant goers (it happens every year) about some who made or missed the top ten list, but there was no doubt in my mind that The Test Kitchen would win. I eat out as much as I can at Michelin and other highly regarded restaurants when I travel (and as far as the budget will allow) and The Test Kitchen has not only improved on its already superior service and technique over the past year, it is deserving of one Michelin star, at least. But, this decision isn’t up to the likes of me.

I don’t intend to write a detailed summary of the other speaker’s talks, some of which were utterly fascinating. Stellitano and Davies -the former not a strong pubic speaker, presented a video created specifically for the conference, based on Cape Town on the topic of  taste synesthesia. This is a neurological condition where the sufferer ‘tastes’ words or images. So very bizarre and inconvenient, you can imagine. Hetta van Deventer-Terblanche spoke about tracing the origins of Afrikaaner food (boerekos) in her extensive research of texts, hand written manuscripts and recipe books passed down over the generations. This is topic that is receiving current revival and I believe a television programme is being developed about traditional boerekos and its roots.

The conference ended with a panel discussion facilitated by Taste food editor and Eat Out judge Abigail Donnelly a woman admired, respected and clearly with one of the tougher jobs in print media. Abigail has encountered her fair share of criticism (as one can imagine Anna Wintour or Joanna Coles have)  and while this piece is not an expose on that subject, my observation is that she has held her head high, kept her wits about her and gotten on with the job. A job everyone wants but that few will take the responsibility for.

Margot Janse on an International Perspective on South African Cuisine

Margot presented a talk on an international perspective on South African cuisine. A little background: Margot came to Africa when she was 19, having gone through the strenuous rigours of a selection programme at a top acting academy in Amsterdam. She wanted a break and needed to experience more of life. It was her first taste of the realities of African life, of apartheid and she remained with her then boyfriend a photojournalist outside the South African borders, in exile. Currently she travels extensively, being invited to cook with other chefs, at events, competitions, galas and fund raisers, always ‘smuggling’ in as many South African ingredients as she can. She tells of the reaction of foreign chefs to the buchu, baobab and num nums (mutton goola, to my family in Natal) she brings, the joy of sharing our food heritage. And to the question at the end about how she manages to get through customs with everything from ingredients to containers of reduced jus, Margot replies, “I dunno. I just smile”.

Margot spoke with just a piece of paper on the podium, maintaining constant eye contact-  no slides, photos or videos, which in the hands of another speaker could have lost the audience. She started with a story of man and ostrich and fire and immediately the audience transformed into a classroom of eager listeners. When she mentioned her love for Africa and its special light, the low whispers and head-nodding all about told of a crowd that related to its speaker. 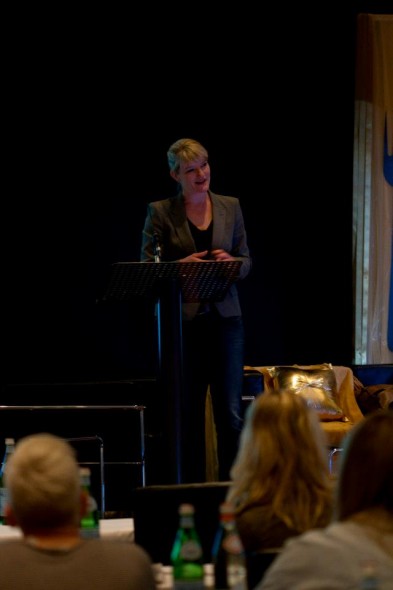 Her message was one about food that told Africa’s stories to guests. It was also about honesty, humility, self belief, hard work, respect for people and the need to give back and to empower communities. I perceived a supreme stillness. Perhaps we wanted to hear more about art, trends, pretty pictures and what we need to get right in order to compare with international standards. Instead, Margot was saying that what we needed was here, it consisted of our own two hands working, giving and thinking beyond consumption.

In a community that essentially focuses on beauty and excess as both work and hobby, Margot’s message was one that burst the bubble. I saw tweets about lumps in throats and teary eyes. I certainly felt emotional. I must confess, I also felt a measure of frustration – not towards anyone, but in light of the fact that this is the very message I have been trying to relay and it hasn’t been easy, locally. But, I realise, what people need is to see someone they respect, a leader getting on with the task of feeding school kids as part of the restaurant’s everyday activities. And I am certain, the empowering message everyone took home is that if Margot Janse can fit it into her life to change the lives of one hundred children everyday, so can I. Or, I would hope so.

A conversation with Margot Janse

I do want to share more about a short conversation I had with Margot Janse just after lunch, and said lunch I must add was really very good. Far from the tedious and standard buffet fare served at 4 and 5 star hotels to conference goers.

Her parents having divorced when she was very little, Margot enjoyed her visits to her father tremendously – he instilled in her a belief that ‘different is exciting’. From trips to eat escargot, to sharing the ‘entire menu’ (two starters, two mains, two desserts) at a hotel restaurant to excursions to the bakery and sampling other cuisines, Margot’s father instilled his passion for food in her. “I do the same with my son now, you know” she says smiling, “We make it an adventure and he loves it”.

“I’ve always been cooking” she explains, telling of the cookbooks she received every Christmas that she would read from cover to cover and the notebook of recipes from every South African magazine she came across that she would dutifully paste in, for ‘one day’, an item she has carefully preserved.

At the age of 23, having studied photography she found herself in the kitchen of Italian chef Ciro Molinaro in Johannesberg, who to took her under his wing, nurtured her dedication – she would spend her lunch hour creating new dishes even while she was training, and gave her room to explore. Margot’s eyes twinkle as she tells the story of a blueberry cheesecake (South Africans love a fridge tart, she laughs) with a jellied layer of blueberry compote, and how Ciro walked into the kitchen and declared that the piece left was for him. That that moment was a pivotal affirmation in her career as a chef is palpable and I am reminded of the necessity of good mentorship for any student to thrive.

Margot smirks. “They always ask me for three, you know” she says.

I ask Margot this question, knowing in the past she has answered that she does not like the contraints imposed by a signature dish, that it can hold a chef back. Her answer is that creating a dish is like giving birth (I do a double take at this stage). “The special dish is the next one being born” she says, leaning in, “I’m not afraid to put three ingredients in a dish now”. And my mind wanders to the the three possible ingredients that can result in the intricate delights she has become famous for.

What inspired your speech?

I put it to Margot that perhaps the angle her talk took, was not what the crowd expected. Her face is calm and she replies, “I wanted to tell them that it’s here and it’s possible. Why do we need to look anywhere else?” She ends by saying “I told them what I wanted to say”.

I’ve seen how hard chefs work. In addition to the creation of the dishes that we expect to be a sensory experience, chefs have to be consistent, physically healthy (feet, legs and backs of steel), calm, able to withstand pressure and leave any ego or problems at the door. Speed is another requirement. I couldn’t do it, so I was curious to know what Margot had to share (would she be willing to?) about handling stress in the high pressure restaurant industry. While walking back to auditorium, she shared her tips:

Staying up to date

After the conference closed, I mentioned to Margot that I had one more question. I thought she was very nice not to roll her eyes at me. Margot said that she stays up to date on techniques and equipment by reading, browsing the internet on her phone and with her extensive travels, she’s always talking to chefs about new methods and techniques and they learn from each other that way. 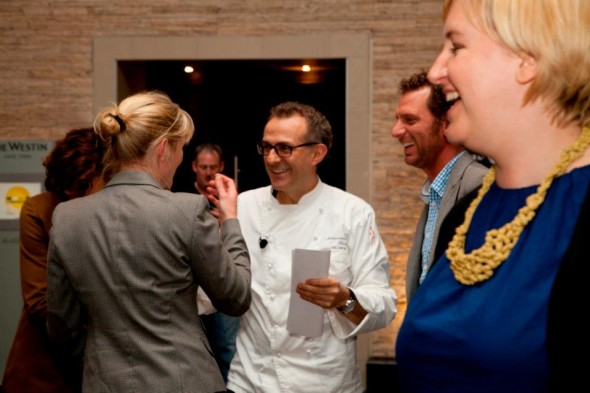 I say goodbye and good luck for the next day, and walk away with the feeling that this group – these chefs respect each other, work together and look out for each other. It’s uncanny, in most professions where the hours are long, the studies intense and the work rigourous, there is an almost built in respect between colleagues. Sure there must be personal disappointments along the way, but the majority of chefs are proud of each other.