Sunlight streams in the early morning over the vessels on the wood fire outside; the drums with water heating for bathing, the pots with the day’s lunch. A version of this appears on Roads & Kingdoms, August 2016. 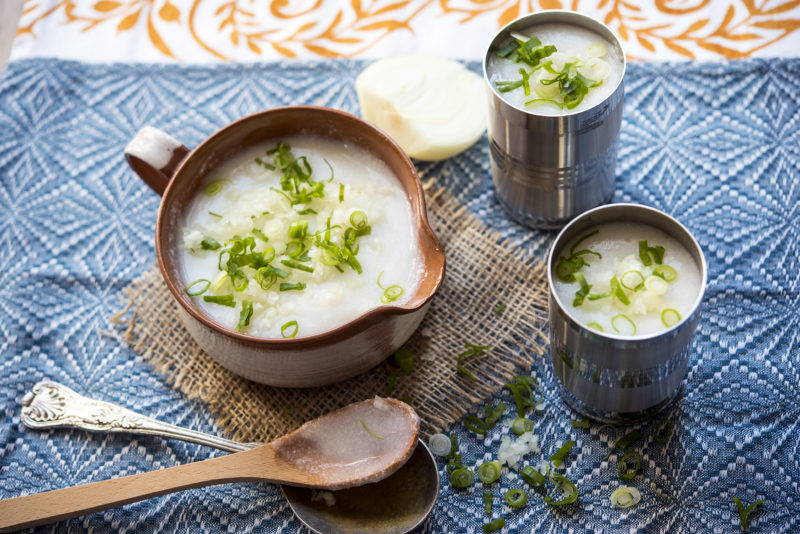 Sunlight streams in the early morning over the vessels on the wood fire outside; the drums with water heating for bathing, the pots with the day’s lunch. My grandmother – wiry, agile, clad in a faded cotton sari, a wet wisp of jet-black hair unfurling from the bun at the nape of her neck, sits on the red stoep in the smallholding in Verulam, north of Durban. Here, indentured labourers who sailed from the port in Madras worked the once-dense sugarcane plantations, her forebears, and mine.

In her hands, my grandmother cradles an enamel mug of sour porridge flecked with chopped spring onions, cool in the rising humidity. From behind a pillar, the paint peeling candy pink, I watch her savour this peace. Before the visiting grandchildren wake up and descend upon the dusty backyard and the mango trees heavy with fruit, before her daughters push through the warren-like bedrooms with their questions and long hair that demand coconut oil and her firm touch. Before the sons who need their lunch tins and two cups of tea, she drinks her breakfast of fermented mielie meal (maize flour) gruel. Some mornings, she adds chopped raw onions, and I smell it on her breath when I leave my hiding post and squat next to her on the stoep, a deep, dark red and cool under my bare legs.

My mother has a similar memory of my Ayah her mother, drinking soured porridge in the balmy mornings, managing her brood of 12 children and orchestrating meals out of the staples of the day. Mainly mielie meal, mielie rice, rice – which was a luxury, and the vegetables they grew in the garden. “They had so many to feed, so much of manual labor. The refreshing sour porridge gave her an energy boost,” my mother tells me on the phone.

In South Africa, with its multi-hued cultural composition, eating mielie pap or porridge for breakfast isn’t unusual. With sugar and milk and a little butter if you can afford it, or syrup on the weekends, it’s a staple that’s endured well beyond the introduction of American cereals and Nutella on toast. It’s inexpensive, stretches far and when fermented, introduces a host of health benefits. South Indian sour porridge, though prepared with the same main ingredient as the traditional fermented drink amarehu (spellings vary across ethnic groups), beloved by the late Nelson Mandela, is different. Associated with the Tamil Mariamman prayers for fertility, harvest and good health, it’s a nutritious gruel soured without the use of yeast, as used by some some indigenous South Africans, and is flavoured with spring onions and sometimes, a hint of green chilli. Or in the case of my father and grandfathers on both sides, fiery, vinegary pickled chillies.

While South Indians used to drink a similar workman’s drink called neeragaram made from fermented leftover rice, a product the indentured labourers in South Africa had very little access to (hence the use of the locally available mielie meal), this drink has almost dispersed into obscurity. Historian A R Venkatachalapathy in his collection of cultural observations on South India, In Those Days There Was No Coffee (Yoda Press, 2006), notes that the introduction of a coffee culture in Tamil Nadu between 1915-1919 by the British, can be attributed to neeragram’s decline in popularity, even amongst the labourers who once relied on it for sustenance, like my grandparents did. Coffee-drinking did not catch on with the South Indians in South Africa and by curious adaptation, sour porridge made with maize has endured, marked now by its significance in religious ceremonies and prayers. Naturally, versions of neeragram, like poita bhut (from Assam and the eastern states) and pazhaya soru are still popular in India, enhanced with mashed potato, mustard seeds, curd and spices. Fermentation allows for iron and potassium levels to increase and the oligosaccharides in the rice to break down to become more digestible. My mother refers to sour porridge as “cooling” and excellent for an upset stomach (we were fed sour porridge when convalescing as children).

The indentured labourers would have applied the same thinking when they invented their own version of neeragaram, sour porridge made with local mielie meal. I think of my grandmother offering me a sip, me turning my nose up at the tart cool porridge, the sting of onions on my tongue but knowing, instinctively, that this would become a moment I would recall for years after her passing. 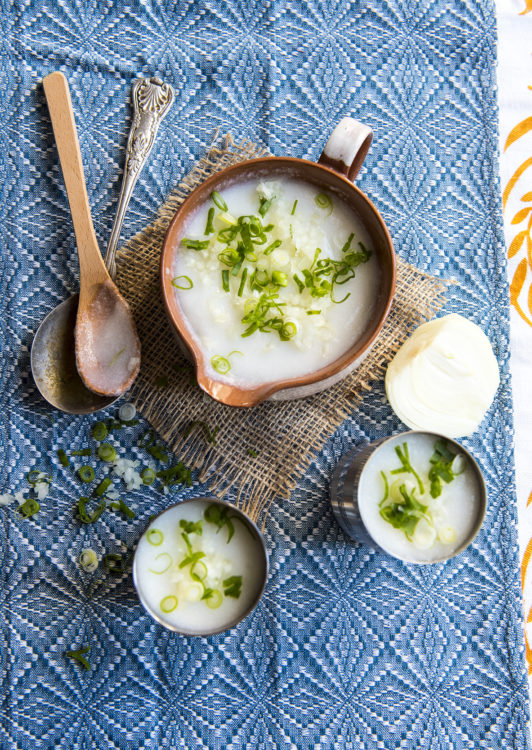