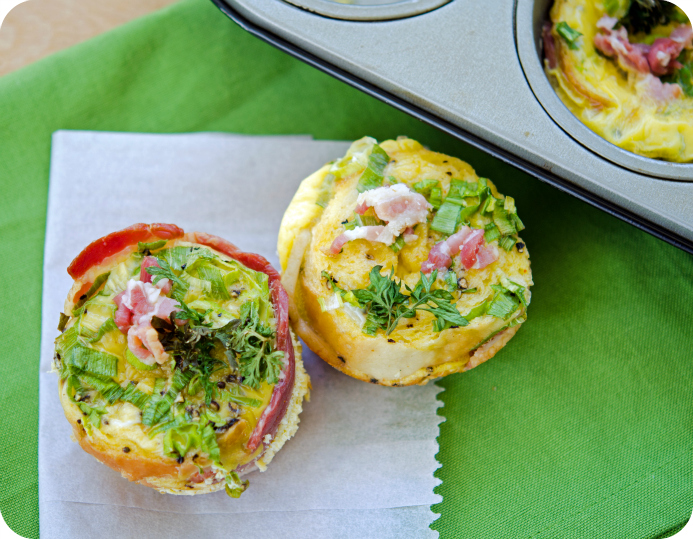 As a food and wine loving community, we have been a-buzz and a-flutter since last year awaiting South Africa’s first MasterChef series – after all we have cooking and blogging friends who entered the competition and some who are contestants, and chefs from our community who are either judges, working in the background on the show or will appear in later episodes. It’s a truly proud moment for all of us.

The first in my contributions to the MasterChef themes is on Eggs. I submitted three recipes and this Rich Dark Chocolate Soufflé with Honey Almond Cream was featured on Woolworth’s Pantry page. I also encourage you to have a look at my easy step-by-step  Healthy Poached Eggs with a Spicy Tomato Chilli Sauce and these fantastic all-in-one Bacon and Egg Breakfast Cups too.

Weekend breakfasts and brunches can leave you standing at the stove preparing one set of eggs after the other, while trying to keep the bacon and rolls warm. These clever Bacon and Egg Breakfast Cups are wonderful because they contain a slice of filling French loaf and everyone, including the chef gets to eat at the same time. Also, they can be prepared the night before and baked in 30 minutes just as the first cries of “I’m hungry, what’s for breakfast?” filter down the stairs. I recommend you use a dry cured (very little water is released and the bacon crisps up well), streaky bacon and herbs that you have at hand are also a good addition. If you don’t want to fry an onion, you can snip spring onions or chives, as I have here. Save a rasher of grilled bacon to chop up and sprinkle over the Breakfast Cups. Serve warm with cherry tomatoes pan fried with a splash of balsamic vinegar. 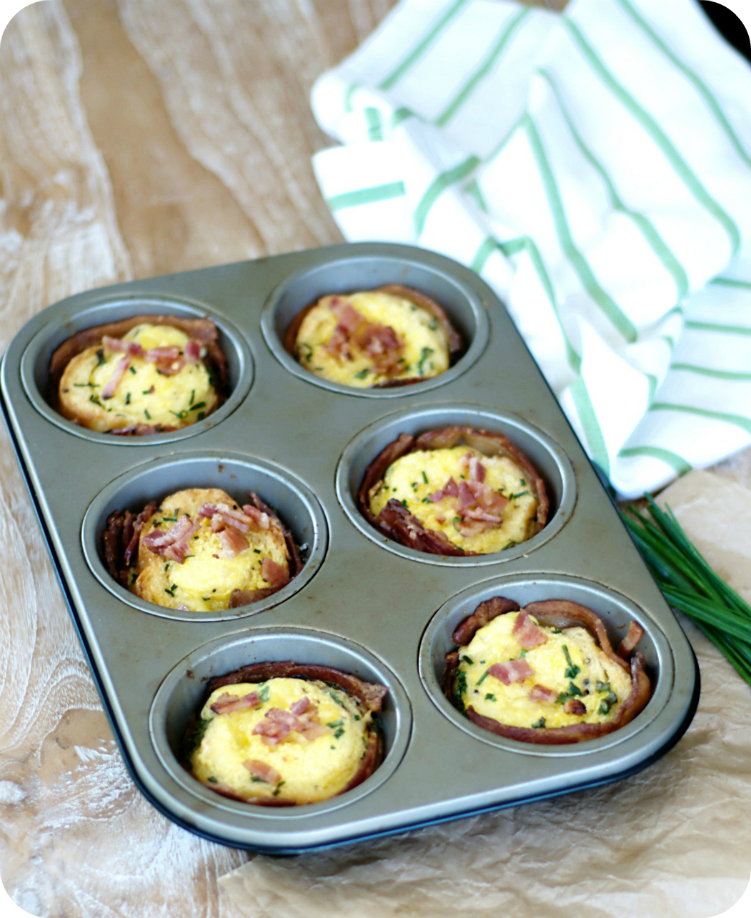 A story of home, but not home

I missed our family home in Pietermaritzburg over Decemeber and January past.

I missed the comfort of my pink walled childhood room, the smallest bedroom in the house, still replete with soft toys and school awards, faint memories of laughter and angst.

I missed roaming the narrow passage outside my bedroom, the aging kitchen with its once fashionable-in-the-early-nineties fixtures.

The afternoon Natal summer rains that soak the earth with a fragrance so ingrained in my mind, that when I get a whiff of it today, all the senses come alive. With immediacy, I’m ten years old again, playing make-belief games with Roald Dahl characters and riding my bike in the  confines of our narrow driveway (“Don’t go onto the road!” my mother would warn).

The balcony where I’d sit at night, under a canopy of stars, practicing my recorder hesitantly, or eating a bowl of chilled litchis, brushing away the lecherous Natal mosquitos.

I think my parents missed the house even more. My father was town-bound in Richard’s Bay after being hospitalised in November. My brother and I and our spouses spent the holiday living close to our parents’ small flat. Still, we tried to cook and eat together as we would in Pietermaritzburg. Smaller ovens and sharing of utensils and supplies amongst three kitchenettes made for a little bit of compromise. Running down the road with a tray held in oven gloves added some comic relief.

One of the brunches I prepared for the family, is this nifty all-in-one number. Bacon, eggs beaten with cream, a slice of baguette and spring onions in the convenience of a large muffin cup. In the original recipe I fried finely diced onion till just brown and added that over each bread slice before spooning over the beaten eggs. This recipe is even easier, as you add chives or snipped spring onions for the same oniony taste without the effort. It’s a good way to work in small space and get everyone to enjoy a hot breakfast at the same time, cook included. Looks darn cute too.

Make in advance – make these breakfast cups the night before. Store in the fridge and bake when you’re ready the next morning. You may need to add a minute or two to the cooking time.

Butter, to spread on baguette (optional) 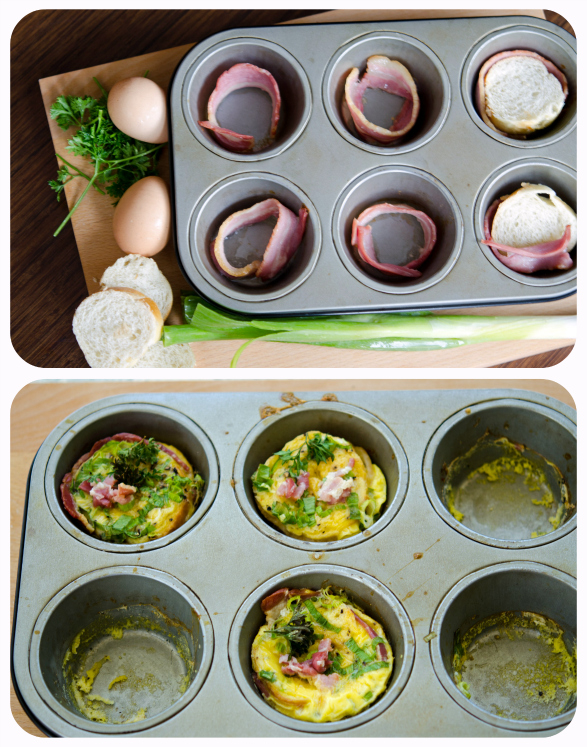 Heat oven to 210˚ Celsius and position rack in top third of oven.

Place slices of bacon on a greased tray and grill for 5-6 minutes till they crisp slightly but do not dry up. Remove.

Grease a large 6 cup muffin pan (you can make 12 smaller muffins too). Butter the bread on both sides.

Beat the eggs, cream, baking powder and seasonings with a whisk till just frothy. Add the herbs.

Place a slice of baguette at the base (it will just fit) of each muffin cup. The bacon would have shrunk a tad with the grilling, so use one and a half pieces of bacon to “wrap” around the circumference of the baguette.

Chop up remaining two bacon rashers and set aside.

Carefully ladle the savoury egg custard over each slice of bread. Ideally, it should just rise above the baguette slice. Some will get absorbed back in. You do not want any of the cups to be dry or “thirsty”.

Bake at 180˚ Celsius for 30 minutes or until a skewer poked in the centre comes out clean.

Sprinkle bacon and extra herbs over .

Run a knife around the edges carefully and un-mould each breakfast cup. Serve warm with cherry tomatoes pan fried with a splash of balsamic vinegar. 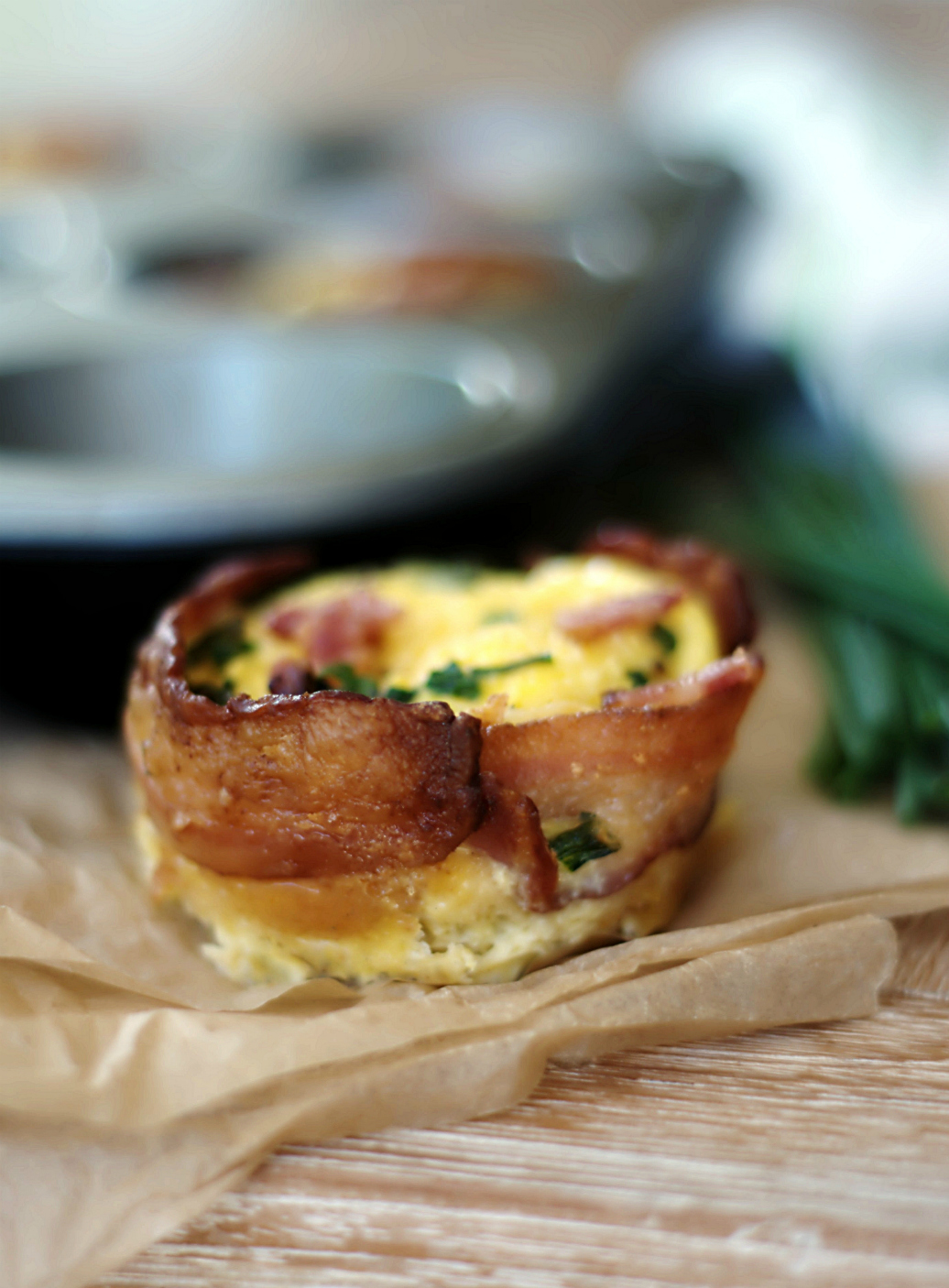