A taste of the Bo-Kaap, South Africa

A taste of the Bo-Kaap – Colouring the streets

Beyond the colourful homes and winding streets, the rich history of the descendants of the Bo-Kaap, South Africa unfolds. Ishay Govender-Ypma spends time with a resident guide. A taste of the Bo-Kaap For The Times, 4 March 2015. 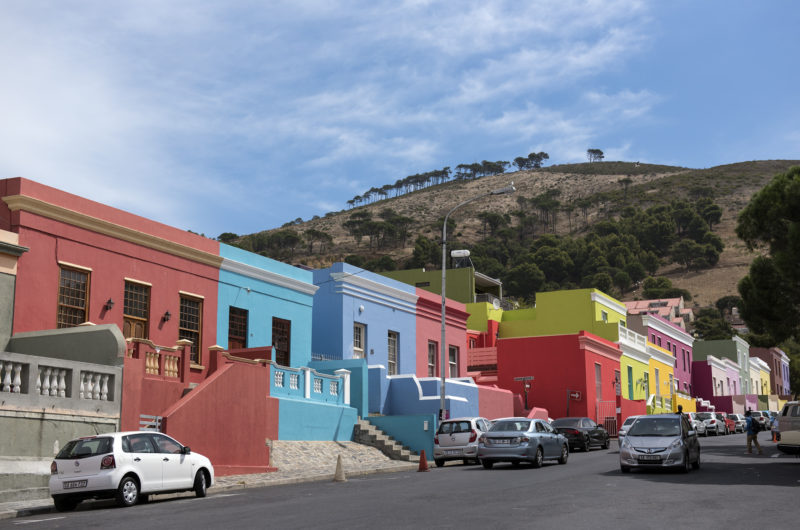 Houses in the Bo-Kaap, Cape Town

Shireen Narkedien returns to us, and we amble past the rainbow-hued houses, learning about the history of the descendants of the Bo-Kaap. Walking along the rickety lanes, she cuts a familiar figure, having conducted guided tours of the area since 1994.  Periodically, she greets friends and neighbours, hands out sweets to children scampering by (“These kids are everyone’s responsibility,” she says), and administers advice on natural remedies, as we’d witnessed earlier.

“My father worked in a pharmacy, and he was always concocting herbal remedies. Nowadays they ask me for advice,” she says. Narkedien’s maternal ancestors have resided in the Bo-Kaap for seven generations and it’s where she’s lived most of her life.

She was the first to introduce homestays to the community in 2000 and helped to set up many of the food demonstration kitchens. Narkedien, I’m told, was instrumental in facilitating the tender treatise on Cape Malay food – Bo-Kaap Kitchen – Heritage Recipes and True Stories by Maggie Mouton and Craig Fraser (Quivertree, 2013). The community is tight-knit and most are devoutly Muslim; without Narkedien’s patient introductions and support, the authors say the project could never have materialised. She served as the bridge between both worlds.

From the base of Schotsche Kloof, hovering above the Malay Quarter, the roads descend like ribbons unfurling into the CBD. Houses glint, trinkets against a blue sky and the lanky Auwal Mosque (built in 1794; it’s the oldest in South Africa) peeks out.

“We’re not Malaysian, you know,” Narkedien says of the name ‘Malay’ that residents (with forebears from Ceylon to Madagascar), are known by. It’s a misnomer attributed, some say, to the Melayu language spoken by traders around the Asian ports, and used in Cape Town until the 1930s.

A few doors up, Zainup Masoet peers from her sister Niesa’s house, waving us in. A feast in the communal courtyard awaits.  Hot dhaltjies (chilli bites) and samoosas precede bowls of chicken curry, rice, rotis and sambals. Thereafter, cardamom tea and fresh koeksisters, pillowy and fragrant with aniseed and orange zest.

Just the day before a film crew was hanging out the windows, Masoet tells us. The house sits strategically across Chiappini Street, regularly featured in fashion editorials. The family doesn’t mind the disturbance, she says. They can generate a small income from it. “In summer it’s Bollywood all over here,” she laughs.

Youngsters walk into the house (her son, his girlfriend). This is the generation Narkedien says Bo-Kaap Kitchen was written for.

“We have preserved our recipes and our stories on the pages for them so they never forget their history,” she says.