Tropes on Starving Kids from an 80s Kitchen

Ishay Govender-Ypma reflects on an 80s youth of big hair, Band Aid and misguided rhetoric. Tropes on Starving Kids. This essay was written for Mail & Guardian. 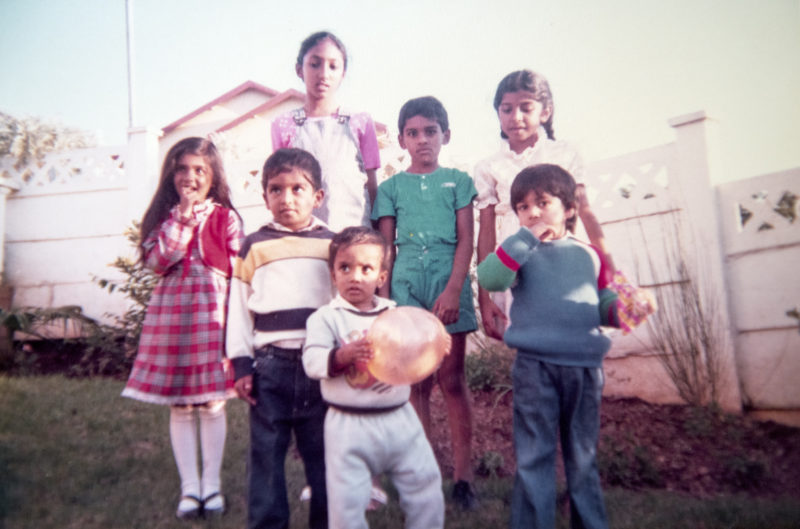 author with neighbourhood kids in the 80s

It was the time of Halley’s comet, Rubik’s cubes and rock stars wearing ripped vests and wild, shaggy dos. Our mothers, not to be outdone, styled their hair in frizzy perms. Men had walked on the moon in the decades prior and we were told that even Indians from the subcontinent and first-generation American immigrants were scientists at NASA, and that, we knew, had the power to make our parents very proud. The eighties, to those who spent their childhoods there, may arrive technicolor and raspy on a cloud of Elnett hair spray and at the sight of a neon “Madonna” bangle found in a box in the garage. No track better encapsulates my childhood memories of the decade than Bob Geldof’s charity outfit Band Aid’s Do They Know It’s Christmas? Even us Hindus on the fractured continent, did. But I knew better than to backchat.

They’d be no snow in Africa this year, we mouthed, feeling sorrow while crushing on George Michael. The song is rivalled in notoriety, if I’m honest, only by the dazzling USA for Africa ensemble performing Michael Jackson and Lionel Richie’s We are the World. In the primary school choir we sang, passion in the timely clicks of our fingers, about being the world, the children, the ones who make a brighter day. The parents beamed with pride, some even dabbed handkerchiefs at their eyes. Emblazoned, empowered, we bleated out the egregious lyrics from the pit of our diaphragms:

We’re saving our own lives.

Mealtimes were often punctuated with threats of a hungry world we’d be depriving by wasting a crust, a spoonful of peas, a minefield of Brussels sprouts.

“There are children starving in Eeth-ope-ya!” my parents would warn of the crushing famine that shadowed our eighties childhoods. The newscasts displayed images of doll-like Ethiopian babies, tummies distended, hair rusty, their emaciated mothers carrying them on bony hips as flies darted around their large eyes and little mouths. There are people dying. And it’s time to lend a hand to life. When I thought of ditching the lousy peanut butter and jam lunch sandwiches, I’d be struck by my participation in the crisis and how my ingratitude rendered me complicit in the larger tragedy. Waste equated betrayal and surely the death of an innocent child. 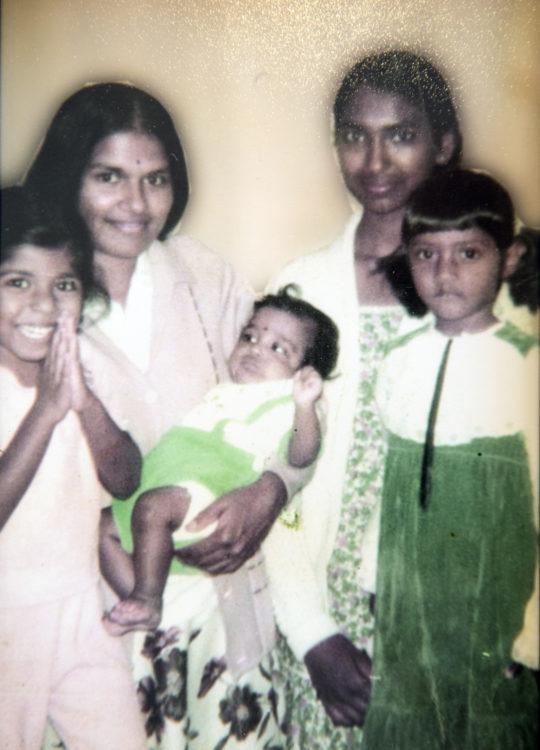 with my mum, baby brother and friends

Wastage in our home was simply not tolerated, though my brother did stash his peas under lettuce leaves sometimes. He’d always get caught, of course. From our parents’ perspective, the demand, however illogical, was a conscionable one, moral, even political. And because there was to be no snow, no Christmas (we did celebrate, even as Hindus) and only the bitter sting of tears under a blazing sun on this blighted continent, almost as worrisome as a withering glance from father, we children ate even the smelliest of vegetables on the plate.

I recall praying in gulps, feeling thankful, like Bono (who has long since distanced himself from the line) said I should, that it’s them, instead of me. The distribution of resources appeared to be a wheel of luck to my young mind. Random like roulette spun by an unpredictable god (many, multi-limbed gods in our home), who was placated by the daily turning of a camphor-lit lamp and the faithful offering of full-cream milk in a brass vessel and fruit, which for a long time remained a luxury in our house. Only when sated, and the last whisper of incense smoked trailed off, could we partake by cutting the banana into slices to share, the orange into segments that I ate gnawing into the spongy pith. As the children of uneducated parents who hovered between varying levels of poverty, my parents’ childhoods were never as “good” as we had it with our boxed cereals for breakfast, meat more than once a week and niceties like new clothes and shiny leather Bata Toughies. Table etiquette in the eighties, not just in our lower middle-class home in Kwa-Zulu Natal, but in homes of colleagues across the U.S and Western Europe, I’d later learn, regularly bandied this rhetoric. “There are children starving in Africa!” – this was our kind-hearted parents’ misguided ploy to instil compassion, and guilt fussy eaters and insolent brats.

How glad we were not be like the remote African children living where nothing ever grows and no rain or rivers flow, while it stormed thick and soupy each afternoon in the Midlands. While the wet earth dried, beggars made their regular afternoon rounds for leftovers that our mothers packed in Save-O-Matic bags. The greatest gift they’d receive is life, we hummed. Bestowed in part by the peas and Brussels sprouts, wild herbs and green beans we were careful not to waste.

I recall, around age eight, dreaming of owning a telescope to watch Halley’s comet on its return. Which, if my calculations are correct, would be in 2061 – roughly enough time for the Internet to bury the ill-conceived lyrics we were mouthpieces for most of our youth. And perhaps, by then, a powerful foreign pop star will acknowledge, that sometimes, it does actually snow in Africa.

But never at Christmas time.