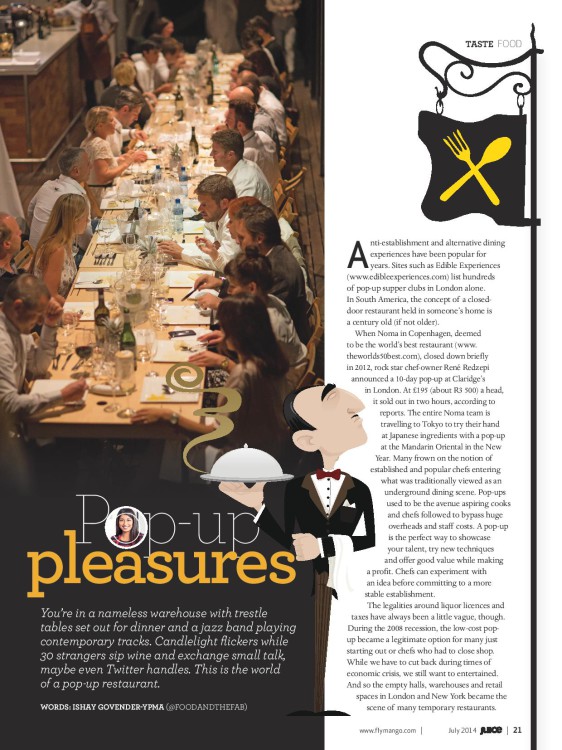 With names like Slippery Spoon and the Wknd Social, pop-up restaurants offering a combination of great food and entertainment, are all the rage

Picture the scene. You’re in a nameless warehouse with trestle tables set out for dinner and a jazz band playing contemporary tracks. Candlelight flickers while 30 strangers sip wine and exchange small talk, maybe even Twitter handles. The chef comes out to introduce the next dish, to a roar of applause. Welcome to the world of the pop-up restaurant. 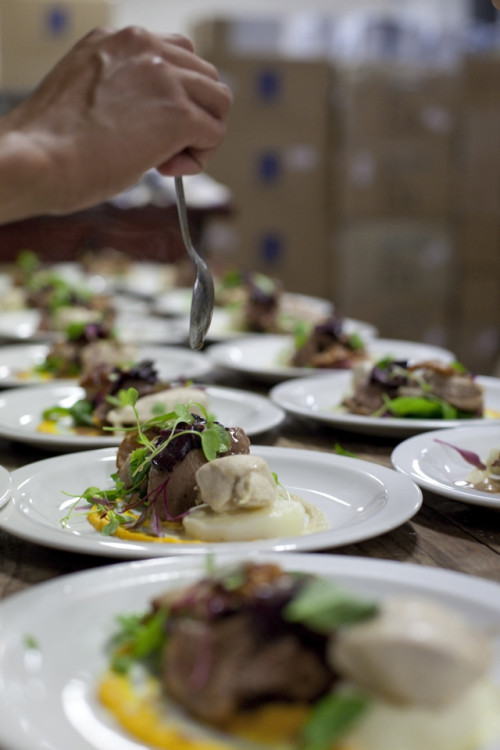 By no means a new concept, anti-establishment and alternative dining experiences have been popular for years. Sites like Edible Experiences list hundreds of pop-up supper clubs in London alone. In South America the concept of a closed-door restaurant held in someone’s home is a century old, if not older.

When Noma in Copenhagen, deemed to be the ‘world’s best’ restaurant closed down briefly in 2012, rock star chef-owner Rene Redzepi announced a pop-up at Claridges in London. The 10 day pop-up, at £195 a head sold out in two hours, reports say. The entire Noma team is travelling to Tokyo to try their hand at Japanese ingredients with a pop-up at the Mandarin Oriental in the new year.

Many frown upon the notion of established, and such wildly popular chefs entering what was traditionally viewed an underground dining scene. Pop-ups used to be the avenue aspiring cooks and chefs followed in order to bypass huge overheads, the cost of several staff and sundries. The pop-up is after all, the perfect way to showcase your talent, try new techniques and offer good value while making a profit. The legalities around liquor licenses and taxes have always been a little vague though.

During the recession in 2008, this low-cost pop-up became a legitimate option for many just starting out or chefs who had to close shop. It’s well known that while we cut back during times of economic crisis, we still want to entertained. And so the empty halls, warehouses and retail spaces in London and New York became the scene of many a temporary restaurant. This spread throughout the world, and is currently a thriving food trend.

The customer who seeks the pop-up is looking to escape the confines of a regular restaurant. And chefs can experiment with an idea for a season before committing to a more stable establishment, if that’s the way they want to go.

This was the case for Yang Zhao who started Beijing Opera in Cape Town, a roving dim sum restaurant a few years ago. Yang worked at markets, festivals and as a brand-activator for gallery and shop openings to increase their foot traffic with her pop-up. “Eventually we got tired of our nomadic existence. We saw an empty space that had a potential to become something, jumped on the opportunity and opened up our first eatery,” she says.

SecretEATS, established in 2013, which operates in Cape Town and Johannesburg, employs the services of top chefs and interesting foodies at secret locations from art galleries to mountain caves. Diners receive the address of the venue on the day via sms and clues about the menu in the form of teasers. This adds to the excitement and intrigue. However, forking out R425 a person for a menu, drinks and company you have no control over, prices the pop-up above most South African’s reach.

“The Johannesburg diner tends to be more adventurous, we found. They’ll arrive as singles without knowing anyone” explains Greg Zeleny founder of SecretEATS. 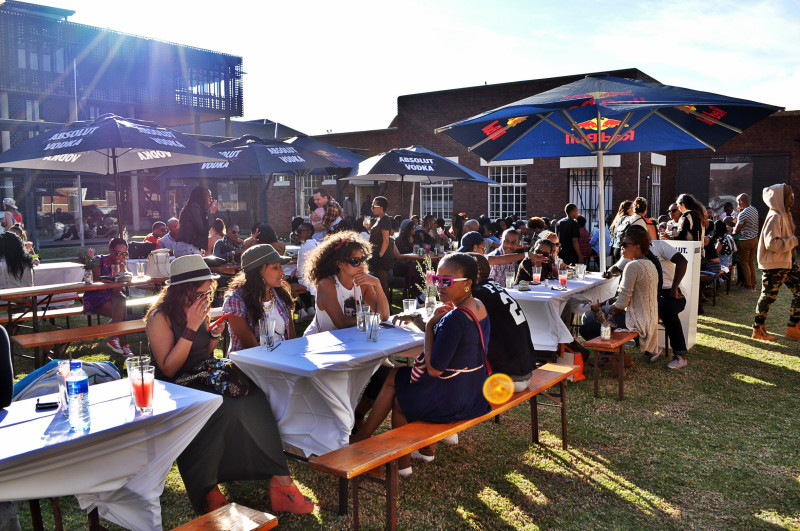 The Wknd Social, a roving pop-up run by five women entrepreneurs including food blogger Thando Moleketi, picks interesting venues within the Johannesburg CBD. This is a monthly brunch that serves international food with a twist like souvlaki and tacos with bottomless cocktails. The bright young things that attend at R300 a pop, usually stay for the pre-booked after party. Not afraid to push the boundaries, the April freedom month edition of the Wknd Social was held at the women’s jail in Constitution Hill. “This event featured food trucks, including one by Tiron Eloff of MasterChef fame. We continued the Freedom Day theme with a ‘Where were you in the 90s?’ dress code while we celebrated 20 years of freedom at this historical venue,” says co-organiser Thithi Nteta. 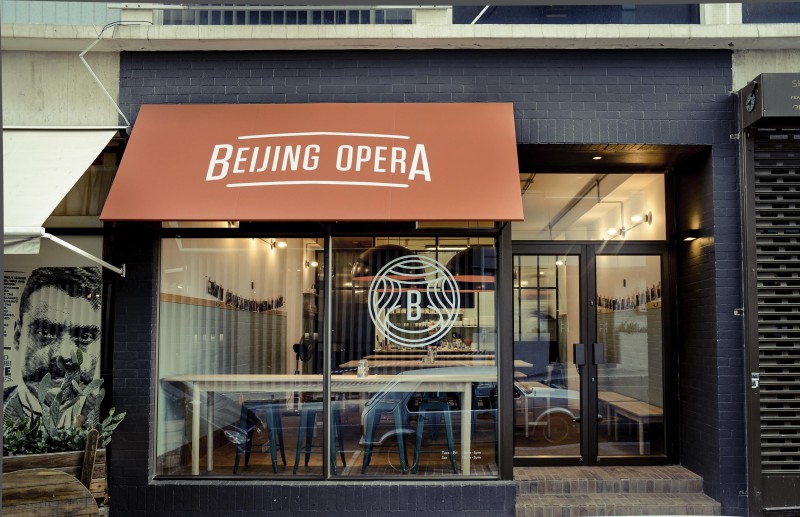 For Sybil Doms and her business partner Peet Stander who run Come Wine With Us, it’s about ‘creating FOMO’ – the fear of missing out. Run predominately on social media, this pop–up started as a dinner for six friends in 2012. Keen on educating people during the dinners, wine makers and chefs get an opportunity to speak about their work. An upcoming event involves a train ride from Cape Town to Khayelitsha with a basic introduction to wine and the involvement of a few community projects that will benefit from the dinner. Asked about the growing success of Come Wine With Us, Sybil says. “Firstly our price is right. Tickets vary from R220 to R420 depending on the type of event and what’s included. People get a good deal and giving value is exceptionally important”

Kiki and Chef Diego who run an underground Italian pizzeria, Ferdinando’s from their home “somewhere along the Atlantic seaboard” in Cape Town, serve just one dish – pizza. Made to exacting standards. Of their popularity, Kiki says, “This is a place for everyone from lovers to solo travellers. Everybody loves to make new friends and at Ferdinando’s we are a big family. There are no tables. Everyone shares and it’s pure joy when your pizza is called!”

Clive Aaron who runs Eat Me Gourmet in Berea, Durban introduces some playful competition between the 20 diners he invites. Each brings an unlabelled bottle of wine that is scored at the end of the gourmet seasonal lunch. “It is surprising how competitive people get – they all want their wine to win. The mood though is relaxed and the ambience is very Durban. The venue is quite high up on the Berea, commanding views of the harbour,” he says.

“When we dine out, we’d all like to ‘ooh’ and ‘aah’, maybe even walk away having learned something or having made a new friend,” says Seano.

For anyone seeking a gourmet meal comprised of modernist cuisine (think inflated mozzarella balloons filled with tomato foam) combined with a theatrical experience, you can’t go wrong with multi-talented Johnny Hamman’s bi-monthly dinners. With themes like The Ten Commandments, Plastic Fantastic and Food and Fabric Pairing, his Slippery Spoon pop-up has gathered a huge following quickly.

Highly conceptualised, the venue normally determines the theme for Johnny. “When I saw the old church, I had to serve the Ten Commandments. It’s more an art gallery experience. I try to entice as much of the guests’ senses as possible,” he says. Next up is a Slippery Spoon roadshow from Johannesburg to George. And it seems South Africans are quite ready for the pop-up.

Have you been to a pop-up you highly recommend? Please share your findings below…

Come Wine With Us: www.come-winewithus.com 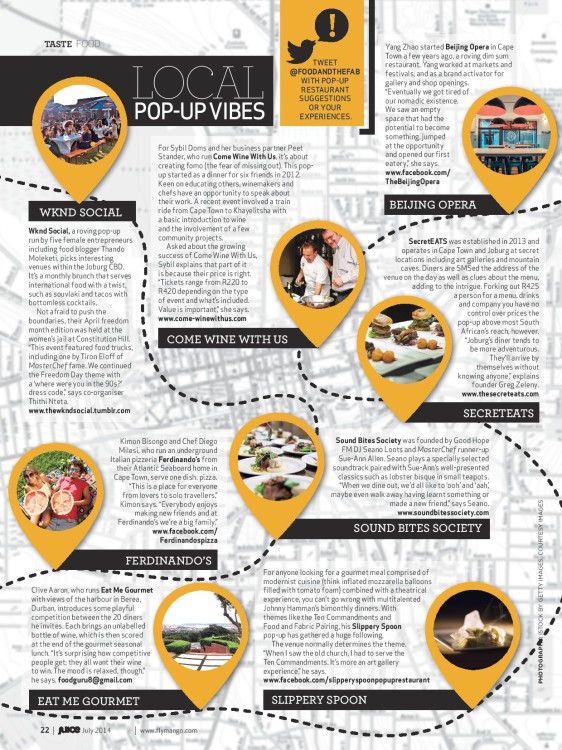