How Durban, My Hometown, Made Me Who I Am

A Love Letter to Durban, city of my birth – South Africa

From the chilly west coast of South Africa, I find myself looking across to the warm waters of the east, thinking fondly of my youth. I was born in Durban, or “Durbs”, for years now referred to disparagingly as the “other” main city, Cape Town’s poorer cousin and “Dirtbin”. The name-callers may feel justified – reports of disturbing levels of litter on the beaches after New Year celebrations make the news headlines without fail. The footage of beaches covered from coast-to-coast with merry-makers, resembling “swarms of bees”, the reports say, gives the impression of lack of personal space, and accompanying it, a danger that lives in the fear of the unknown for those who know the privilege of sparsely populated shores where the only intrusion may come from the occasional granadilla ice lolly vendor.

Durban, known popularly in Zulu as eThekwini, named for its bay, has been a safe harbour to many over the years: Rio de Natal to the Portuguese seafarers and finally, Durban to the British, after Sir Benjamin D’Urban. It is home to the Zulus, its first inhabitants after the hunter-gatherers, the indentured Indian labourers who arrived from Madras at its port (currently the largest container port in Africa), the descendants of the British colonialists, as well as the Voortrekkers. 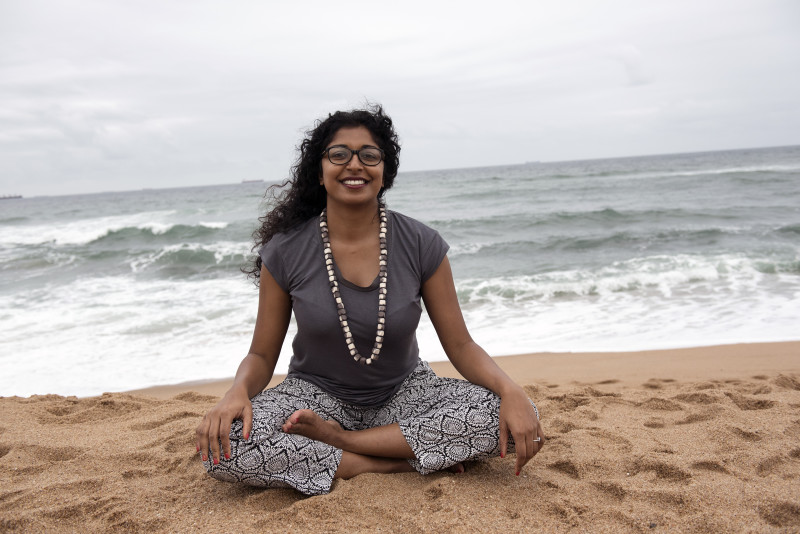 Finding my “om” on the beach in Umhlanga

The New York Times honoured Durbs “often scoffed at by Capetonians and Joburgers for being a touch gauche,” at a notable number seven (the list isn’t ranked) on its Places to Visit in 2015. Timely too, in light of the Common Wealth Games the city will host in 2022. The comparison war wins no city any favours. Cape Town is gloriously handsome, picture-perfect on the surface, though bubbling discontentedly with social and political undercurrents. Johannesburg is grown-up, fizzling with energy, talent, currency and a bad reputation for violent crime. Similarly, Durban has its own charm, and flaws to match.

It doesn’t help that the murky waters of the Indian Ocean, the fatigued facades of buildings along the humid coastline, the monkey and mynah-plagued homes surrounded by oppressive tropical vegetation, and the presence of mostly take-it-or-leave-it low-cost eateries lend Durban a blurry, somewhat chipped visage.  A place out of a Rudyard Kipling novel, perhaps. I left Durban at age three with my parents to the Natal Midlands, but returned to my paternal grandparents at every available weekend until I left for university. All our extended family lived, and still live in the vicinity, around the smog-heavy Mondi paper mill in Merebank, Overport, the beaches of Isipingo, in Tongaat, La Mercy, the rural smallholdings in Verulam. And much later after the fall of the Group Areas Act (which prohibited different races from living together), in gated houses in Westville and Morningside and two-bedroomed apartments in Musgrave and the CBD. 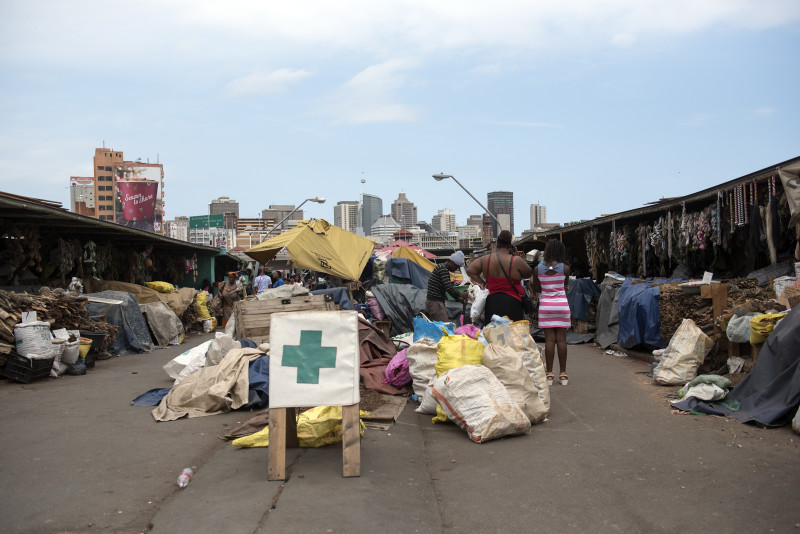 For all its island-style humidity and drone-sized mosquitos, Durban is, for those of us who left our childhoods there, entwined with our sense of identity.

Durban is the call to prayer at the neighbourhood mosque, the squawk of peacocks at the temple grounds. It is the ring of the ice cream vendor’s bicycle and your grandfather, tweed cap atop his head, buying you an Eskimo Pie.

It’s the call of the mielie vendor, and your mother rummaging for coins so you can enjoy hot, buttered mielies with Aromat for the afternoon cricket game on Telly. It is the hordes of easels that flutter around the dull street lamps in summer, neighbours who bring trays of elaborate home-baked treats for Diwali, Eid or Christmas. Durban is the bunches of blushing-pink litchis and stringy mangoes eaten straight from your uncle’s trees, and sitting in the shade against the neighbour’s wall, dreaming of the boy across the road.

It is the tepid rain on your skin at 2 p.m. and your mother demanding you come inside or “you’ll catch pneumonia!” It is the thrill of Mini Town and the reptile park when you are seven, beach walks along the evocatively named Golden Mile as a teenager, drinking peach schnapps and dancing with awkward limbs at Palladium night club. It‘s the roti rolls at The Wheel, as Junior Tucker’s She’s Just 16 Years Old blares from the mall’s speakers. Durban is your beautiful cousin’s wedding at the Botanical Gardens and the last time you will see your grandfather alive. 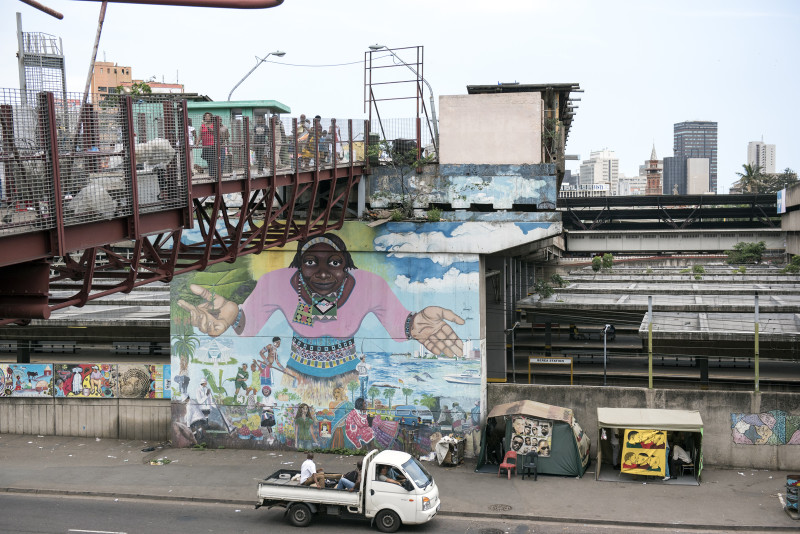 It is the place where people say “what kind”, a concise expression denoting anything from “how are you?” to “tell me what’s new”. Durban is getting stuck on the rubber tubes at the waterpark, exhausted and happy, long before it becomes uShaka Marine World. It’s where you’d probably call your father’s colleague “aunty” or “uncle” irrespective of race or ethnicity. Durban is the family who deliver the first sardines of the season and cooked meals for a week even though you live an hour away, to sustain you while your mother is in hospital. It is your father’s aunt, desperately poor, yet always smiling and ready with a plant from her garden as a parting gift.

Durban is where my ancestors rest now.

I return each year, as I will at the end of this one, wary of the distance between us, but excited too to see and experience not just the familiar, but the new (I still won’t swing across Moses Mabhida stadium, though). Once I adjust to the humidity, the colloquialisms, the fiery-heat levels of the curry, the umpteen queries about “why you left law?” I will fall snugly into the rhythms of Durban, a city that shaped, at the core, the essence of who I am. 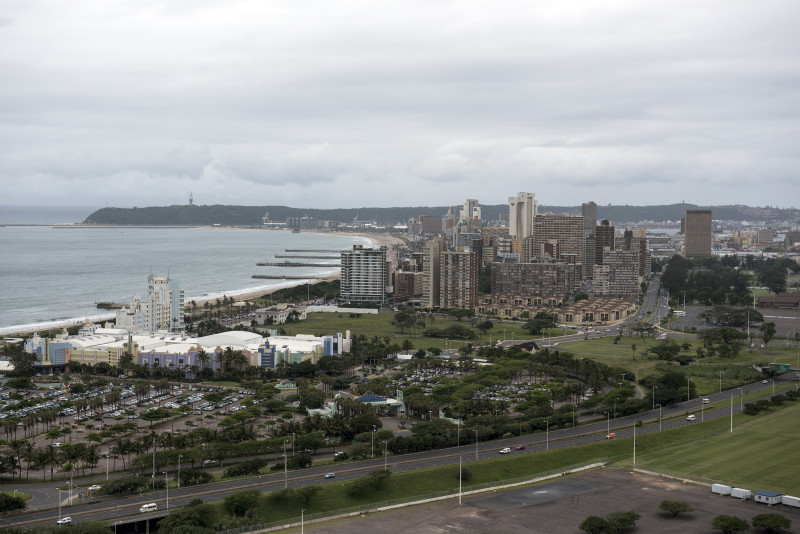