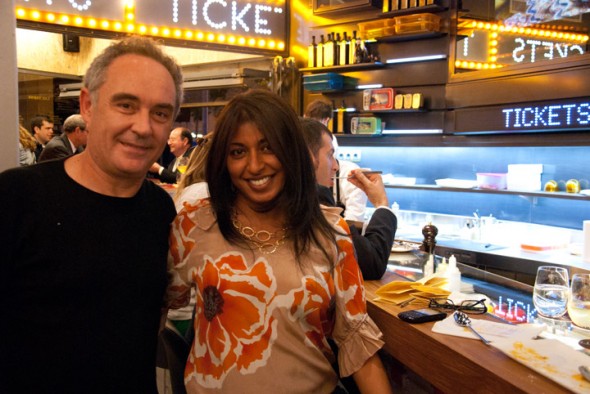 with Ferran Adria at Tickets

I guess if I was infinitely cooler and far more worldly, I’d have been able to resist the aching temptation to make the opening picture one of myself with Senor Adria. Alas, despite attempts at nonchalance, I’m not. I had the incredible (and unexpected) opportunity of meeting Ferran Adria just over a month to date, at his wildly acclaimed tapas bar Tickets, in the theatre district of Barcelona.

Nary a word was shared between us (it’s common knowledge that he speaks only Spanish and mostly Catalan), apart from my stifled squeals of delight and the breathy “thank you” I managed to utter. I do wish I tucked my hair behind my ear for the picture. But, never mind that, I know you want to hear about the restaurant and the food. 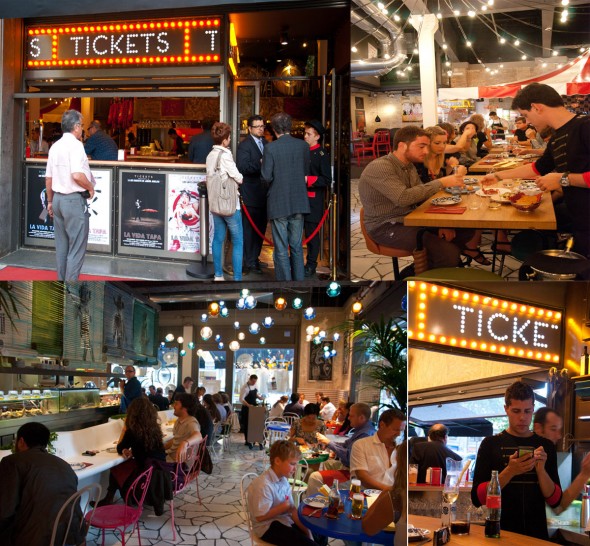 Patrons are welcomed on a red carpet, by an usher resembling one at the theatre. ‘Tickets’ is emblazoned across the front in much the same manner as shows on Broadway- clearly the restaurant is in keeping with the area.

Upon entry, it’s immediate that this is not the formal, stuffy, may-we-take-your-coat-Madame sort of establishment you may associate with chefs of Adria’s stature. The space is eclectic, for want of a better word, in design. Five open cooking stations, bar counter seating, heavy wooden tables on one side, and bright wrought iron chairs and light coloured tables on the other with colourful globes suspended from the ceiling.  The more you look around, the more you see- toy helicopters made from aluminium cans, fresh vine tomatoes, bright yellow fittings. Playful and cheerfully theatrical. There is an energy in the air, evident from the young, enthusiastic waiters to the patrons all clearly thrilled to be in attendance. ‘La Vida Tapa’ is embroidered on the chefs’ jackets. 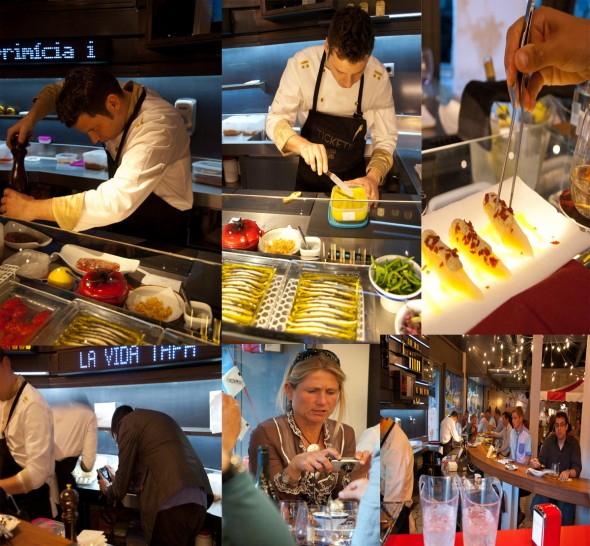 At this point I’d like to add, there were cameras everywhere! Everywhere I turned people were snapping pictures of their plates and no one seemed to mind. If you follow me on twitter you may recall me asking what the etiquette was in fine dining establishments regarding the camera. We found ourselves at a few Michelin starred restaurants prior to visiting Tickets and at one, I was possibly the only person who lugged the camera in. I hid it shame-faced, in my bag after each course at that stage. But not here! 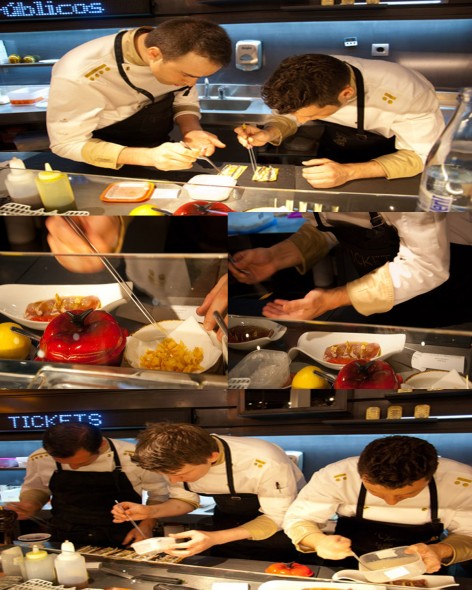 We sat relaxed at the bar  and were privy to the action of the chefs at the fish station- tweezers, tongs, precious edible flowers, silver paper made from potato. They were bent over in concentration, working silently in unison and churning out consistent plates (I know this because I paid special attention to see if each plate was styled according to mood or a fixed template). 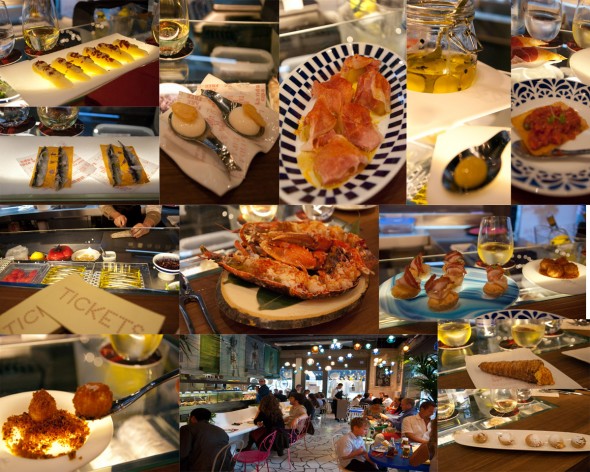 The menu is printed on yellow paper and folded to the size of a theatre or movie entry ticket. Very in keeping with theme.

There is little fan-fare around drinks. The menu has a complete selection but each category has just a handful or two of options. You can have a bottle of cava for 26 euro or Moet for 55 euro; making money off the drinks is not a priority at Tickets. The most expensive wine is a Red (Numanthia) at 54 euro for a bottle. We enjoyed a bottle of what tasted like Chenin Blanc, served casually in water drinking glasses. I thought this touch added lightness to the mood and embraced it.

Naturally, one expects inventiveness and scientific glory from Adria’s food. The question in my mind was, how could he achieve this with Spanish tapas- one of the most tried, tested and replicated foods the world over. Even I have a post on how to set up a basic Spanish tapas board. Iberian ham and cured meats, olives, bread, prawns with garlic and chilli- there’s hardly much more that can be done to improve on these classics. Clearly, I was wrong. 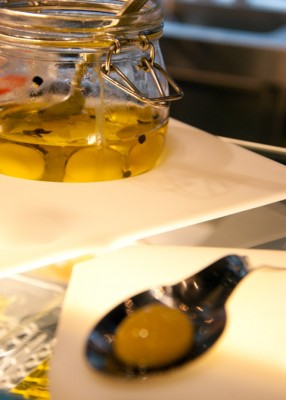 Let’s look at the olive, for example. Adria has been serving the ‘liquid’ olive for years and it’s a firm favourite on this menu too.
What it is, is the juice of the single best olive (10-15 of the prime in season are pureed, strained and then judged). Added to a alginate solution the calcium rich olive puree will form a layer and seal. This must not be left in the solution for longer than 2-3 minutes. Once removed it is marinated in olive oil, garlic and lemon as you would regular olives. The ‘olive’ explodes in your mouth- an intense flavour burst. You can watch how this is done here:

The liquid ravioli, which tasted of the freshest, creamiest buffalo mozzarella served with payoyo cheese from Cadiz is also made in the same manner.

Other dishes we enjoyed were the white anchovies, covered in sliver potato paper (to resemble scales) and served on a tomato consomme jelly with spring onion flowers, the ‘air baguette’ – crisp loaves resembling mini baguettes but empty on the inside wrapped in Joselito Iberian ham (a make the restaurant supports), clearly the very best jamon according to Adria and the spiced tomato steak tartare with bread crisps. This tomato gives the beef variety a run for its buck- it was meaty, juicy and the flavours perfectly balanced- sour, salt and a hint of sweet.

The Spanish grilled lobster in a light pickling was suggested to us; I found it lacking in oomph if I may be perfectly honest. There is very little you need to do to it as the flesh is so delicate and flavourful and little was done. I was probably expecting magic clouds and fireworks, so greedy does the Adria guest become.

I was also very impressed with two of the three desserts we had- the Catalan cream roll was simply a large pastry horn filled with caramelised Catalan creme (a lemony version of creme caramel), no surprises just pure decadence and the cold-hot chocolate fritters – cold chocolate centres in soft warm pastry shells.

Two people can easily enjoy 16 plates of food on a hungry tummy and we did so with flying colours.

Prices range per plate from 2.90 euros to 26 euros per plate. Without a doubt, if Tickets was in Cape Town it would be the perfect pre or post theatre spot and one you could treat yourself to more than a few times a year. (I’d have to insist on once a month!)

More Adria magic was about to unfold, because we were invited to his 41 bar at the back of the restaurant by our young waiter and were in for an amazing evening. Completely unexpected- but that, for another time!

Initially, molecular gastronomy was the term given to the process of exploring the science behind traditional cooking methods. The idea was to explore and investigate commonly associated methods such as adding olive oil when boiling pasta and establish scientifically what worked and what didn’t.

There appears to be a flawed perception that molecular gastronomy translates to mean haute cuisine or fancy food, when in actual fact it refers to the understanding of the physical and chemical reactions that occur during the cooking process. It would be naive to think only processes like spherification(like with the liquid olive above) involve scientific methods. Just the act of making custard, baking bread and cooking chicken utilises basic scientific principles.

I think that when people quote Heston Blumenthal as having stated ‘Molecular Gastronomy is dead’, there lies a misconception that perhaps haute cuisine or fancy food and curious chefs with alchemistic tendencies have lived to the extent of their days. Blumenthal, like Adria, simply mean that molecular gives people the impression what they do is overly complicated and gastronomy has an elitist undertone. Now, I doubt the majority reading this have access to the gadgetry at these chefs’ disposal as well as the combined scientific know- how, so naturally I maintain that what they do is complicated, or it can be. I recommend you read the article in The Guardian which explains how a host of these chefs have forwarded a statement on their craft and how they view the future of this type of cuisine.

Adria prefers to call what he has spent his entire career developing as deconstructivist cuisine, which after much research I can only interpret to mean the reconstruction and representation of food based on old and familiar cooking methods, in new and exciting ways and in a manner in which not only taste comes into play but the visual too. I suppose it must sit better with Adria because both terms appear to hold the same meaning to me.

I respect the movement that advocates cooking foods simply and in time honoured ways. I also encourage scientific advancement – we’re reliant on this for every facet of our modern day lives. No one can imagine a world without instant Internet access and cellular telephones yet a mere ten years ago these were looked upon with much skepticism too.

Before you knock off what is labeled as molecular gastronomy, I say give it a go- eat, savour and make the decision for yourself if the experience is worth it. Or not. Also, if you have speculations about what goes on in the kitchens and hold reservations about the safetly of the methods used, may I encourage you to make a trip to one of them before you make up your mind. As with everything, try first, then judge.

Booking for Tickets are done exclusively via the website. Currently it seems the only available dates for the year are 16 & 17 September 2011.

* As stated in my About page, interpretation of the menu and all views expressed herein are entirely my own*