Sake and Umami Dinner at Nobu

* With special thanks to the talented Jurie Senekal for use of his photographs. All photos are Jurie’s unless specified. Visit his website for more info: http://juriesenekal.com/ * 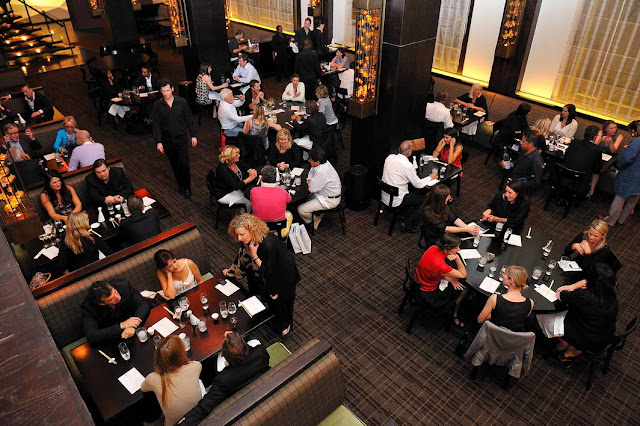 Nobu, Cape Town hosted it’s first Umami dinner and Sake pairing on 19 November 2010 (with the second one the following day), and I booked a place as soon as I saw the event tweeted.
I’m glad I noticed the tweet, because the event was not highly publicised- the goal being an intimate evening of food, sake and sharing.
Yet another example of how social media has influenced our social arrangements and has become a vital source of information.

On the afternoon of the event, I was struck by a mild panic as to whether Nobu san, the man himself would be at the dinner, or if he one of his representatives would be standing in.
I needn’t have worried- upon arrival we were presented with a glass of bubbly and Nobu san, seated at the back signing books, was pointed out. I felt a giddy wave of fan girl euphoria, and host Yoram Perez assured me that Nobu san would come around to our table to sign my cookbooks as the dinner was about to start.

A crowd of 54 made for an intimate evening, where Nobu san, the Sake producer Fumio Hazu (affectionately known as Mr Sake), Mr Sake’s translator and two umami experts discussed the food, the sake and umami the concept and mingled freely with guests. 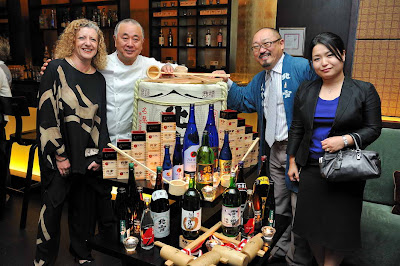 Umami is derived from Japanese for the 5th taste or loosely translated “good taste” and has been scientifically proven to exist, along with the accepted and well known salt, sweet, bitter and sour tastes.
It was discovered in 1908 by Dr Kikunae Ikeda of the Tokyo Imperial University when he chose to study what made dashi stock (a stock made from kombu or kelp, that is commonly used in Japanese cooking) appealing and delicious.
His findings revealed that the high level of glutamate, an amino acid in the kombu lent this savouriness, a taste most appealing to the taste buds.
It can be found in broth or stocks, meat and fish protein, tomatoes, mushrooms, cheese, bacon (which could explain bacon’s longevity as a hip ingredient and the cult like popularity of the bacon croissant in Cape Town, including a competition amongst top bakeries about who could make the best one. For a review on this competition read: here).
When glutamate rich substances, such as the dashi stock are added to or served with any of the above ingredients, they work synergistically to increase the umami or savouriness of the dish and what you’re left with is an intense taste explosion.
Since the 1980’s umami has been commonly accepted as the official 5th taste.
It would make sense to serve the umami rich foods with water to quench the thirst and pair them with sake to compliment the favours, as was the case here.
(For detailed information on the science of umami please refer to Wiki’s page or the Umami information Centre’s web page ) 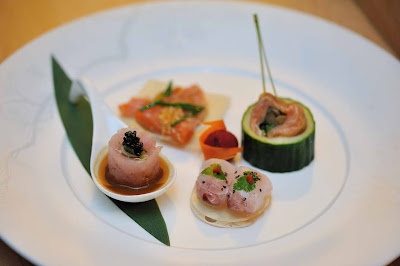 This course comprised sour (citrus), salty (soy), heat (wasabi) along with umami flavours, which complimented the fish.
This was paired with a sweet and dry “Nobu The Premium Sake Daiginjo”, a YK50 sake.
Let it be said that this was my first sake experience and I found the favours to be clean, delicate and dangerously quaffable.
Mr Sake’s translator explained the sake making process and that he is able to produce what he calls “the beautiful sake” because the island on which he lives, has the following essential ingredients: the best rice, pure water and clean air. In addition to this he plays a certain type of music during the maceration process to intensify and speed the process up.
I am in no position to argue with that! 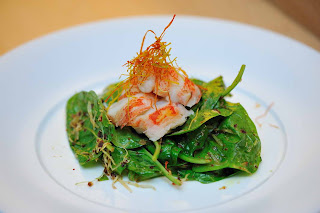 This course was described as a taste bomb and I could hear the appreciable hmmm, hmmming from guests seated around me. It was served with yuzu (a Japanese citrus) and finely grated parmesan. Eat Out’s Abigail Donnelly, whom I had a brief friendly chat with at the end of the dinner (again, due to a tweet I was made aware of her presence- perhaps twitter will be the death of all privacy) said she’d love to make this dish for friends and I agree with her sentiments that the lobster, while glorious and a luxury, was not essential to capture the umami of the dish.
This dish was paired with a “Yukino Hibiki” sake This was served with a warm “Junmai” sake, the least fermented of the sakes.The tomato soup was tangy and balanced by the mellow, savoury custard underneath. I found the gemmai salsa similar to a sambal- zingy and it defiantly got the taste buds doing a Pointer Sister’s Jump (for my love)!
While flavoursome, the custard was not my favourite. 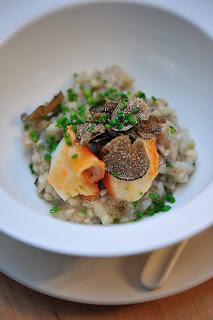 How could I not bend down and sniff the truffle slices on top, despite what the rules of fine dining etiquette dictate. Having heard that Nobu san himself had prepared the risotto, I tucked in with greedy abandon. This was served with probably my favourite of all the sakes, a “Sake Rock by Nobu”, which is a 28% polishing grade sake served in a short glass, with a perfect ball of ice in the centre, made using a special Japanese piece of equipment, I had overheard, and served ice cold. It was fantastic in its presentation and refreshing in taste. I will be returning to Nobu and hope that they specifically have this one in stock. 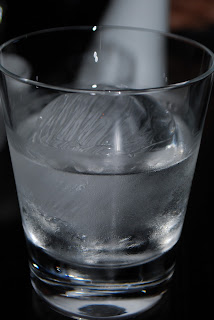 my pic of the rock sake 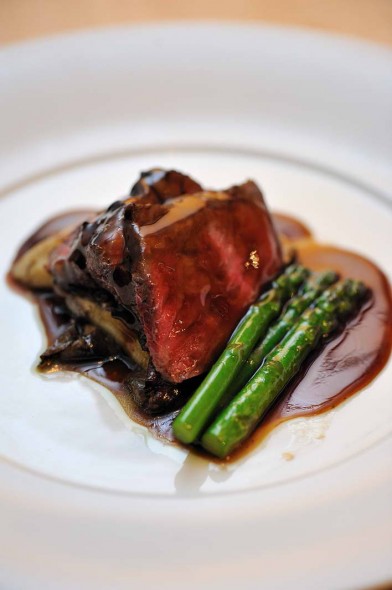 The beef was aged and tender, and as was expected, the sauce a testament to umami. It is common knowledge that as food ages (cheese and meat for example), the proteins are given a chance to break down and more glutamate is released and hence the umami flavour is amplified. Consequently, it is perceived as more delicious. And the beef certainly was.
The sake paired with this, the “YK35” was described as rare and exceptional. This sake can be allowed to warm to room temperature whereupon the flavour changes slightly.
I thought this was an excellent pairing and even my novice taste buds could appreciate it. My dining partner was in agreement. 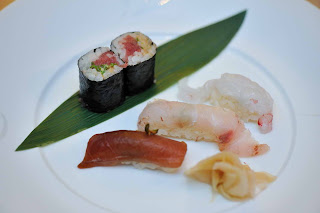 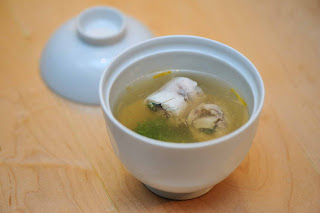 The dashi stock was prepared according to the original umami stock recipe and tended lovingly by Nobu himself. This was worth putting up my best ‘slurp’ for. 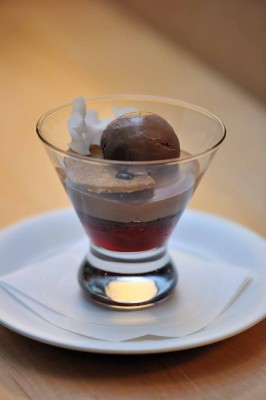 This was a cold dessert served in a glass, in much the same way as an individual serving of trifle.
The bottom later revealed a tart raspberry jelly and slightly salted coconut shavings on the top.
I was in raptures!
The “Hokusetsu Umeshu” sake served had a distinctly amaretto or marzipan flavour and all around I could hear guests raving about it.

The dinner finished on a high, and surprisingly after 7 courses we did not feel over-full or uncomfortable but rather energised for a night on the town.
Which lasted as far as our walk to the car, whereupon I put the sensible cap on and we headed home, enlightened, our senses tantalised and very, very satisfied Chef Nobu san
When I think of popular celebrities, or even local “head foodies” I can not help but feel a combination of shy and reluctant to approach. There’s a feeling of “me” the amateur cook and person with zero influence and “them” the stars with food knowledge, know-how, followings of who knows how many and the right to have an attitude.
How surprised I was by Nobu san’s warmth and open nature. He sat close to me and leaned in for a photo and even though I had a silly grin plastered on my face (he had just piped up “Say Sushi!), my eyes were filling with tears.
I had already known of Nobu san’s story- it is one of hardship, failure, persistence but most of all courage.
Nobu san may have collaborations with Robert de Niro and more than a string of Nobu’s and Matsuhis’a all around the world but he is humble enough to make strangers feel, even for a few moments, like there is truly no difference between any of us and that the thing that binds us all: (celebrity) chef, servers, patrons is the food. The glorious food!
[Nobu san invited us to join the two week cruise he does on the Crystal Serenity and of course I’m convinced it was personal invitation and that when I rock up in a turquoise kaftan and gold flats, he will remember me!…Allow a girl her delusions, will ya!] 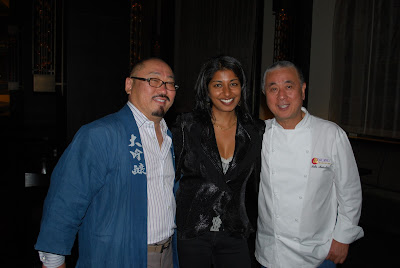 Not a Jurie Senekal pic!Postscript
In his first book, Nobu The Cookbook, Nobu san speaks of one essential ingredient that he adds, that no one else has: kokoro, his heart. He says “you must put your own heart into your cooking”
Sage advice, I think.ContactNobu:
+ 27 21 431 5111nobu.reservations@oneandonlycapetown.com
Open: Dinner 6pm- 11pm

*Note*The opinions expressed above, and interpretation of the menu and ingredients presented, are mine alone. I apologise for inaccuracies, if any.
No offence to the establishment, chef or staff is intended. 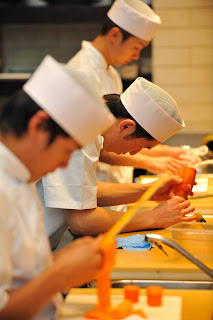