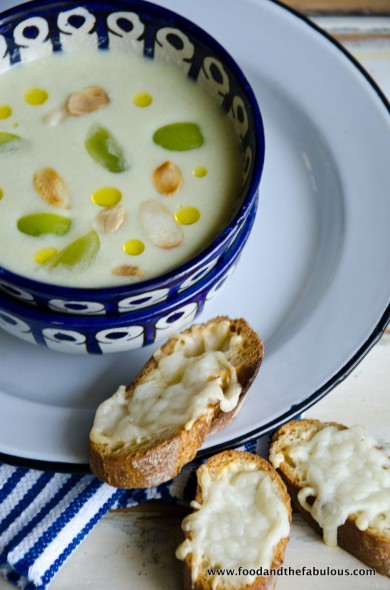 I am so excited to be collaborating with Mediterranean Delicacies again (you can browse through the other recipes I’ve done for them here)!

We are bringing you a four part December series taking you to some idyllic vacation spots that I’ve been to. I hope you will enjoy the journey via the images and try out the products I’ve used to create the recipes, to take you on your own wondrous travels, from the comfort of your home.

Last week, we took a trip to Chefchaouen in Northern Morocco with a Beef & Caramelised Onion Phyllo Tart.

Today, I want to share an ajoblanco or white gazpacho soup, popular around Spain in summer and perfect for our fiery South African festive season. While ajo means garlic in Spanish, what makes this soup distintive are the almonds used.

Ajoblanco (white gazpacho as we know it) is traced back to the province of Andalusia in the south of Spain, and this would have been a perfect opportunity to share more about Andalusian Granada, which I visited at the end of September….except every day for the four nights we spent there, it rained.  Which was a relief to the city, as it hadn’t rained in around seven months, we were told. The Moorish inspired architecture of the Alhambra and the city itself, is very impressive…..but most of my pictures look like this: 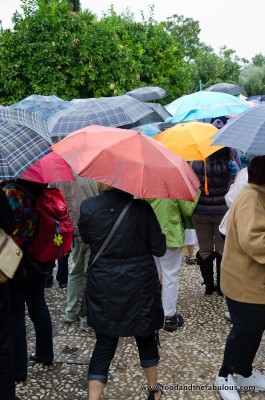 And so, I thought I’d share a little about beautiful Palamós instead, a town in the Girona province along Spain’s Costa Brava. Palamós is in the north eastern part of Spain, with a bustling port. 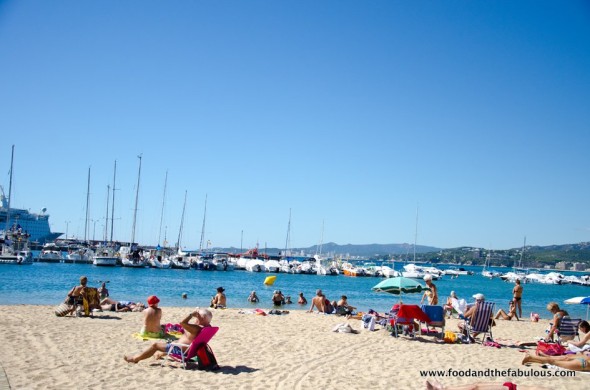 When we were there, an enormous cruise liner had docked, a common sight and the mainly British tourists that weekend were to be found at the beach, the restaurants and exploring the city. Each morning, a combination of tourists and some (older) locals, ventured out to the bay to commence the day’s rotisserie action: sunbathing.

If you aren’t used to the beach culture in these parts, it may come as a slight surprise that topless bathing (at any age) is the activity, du jour. As is nudist caravanning; a park we passed often between the next town Begur and Palamós was set aside for this very thing. Fishing is also a major source of income for Palamós. Fishing for compliments while sunbathing topless, another story. 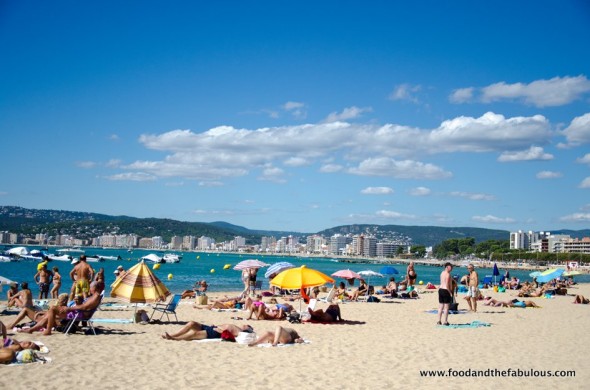 Palamós also boasts a very popular hotel, a smart one hundred year old three star which by all accounts should be a four star at least: prime spot overlooking the sea, huge rooms, large refurbished bathrooms and very friendly service. A stylish restaurant is attached to the hotel and a beach bar across the road, which is where I enjoyed a lovely white gazpacho.  I’m going to share my top tip: the name you need is Hotel Trias (ask for a sea facing room). 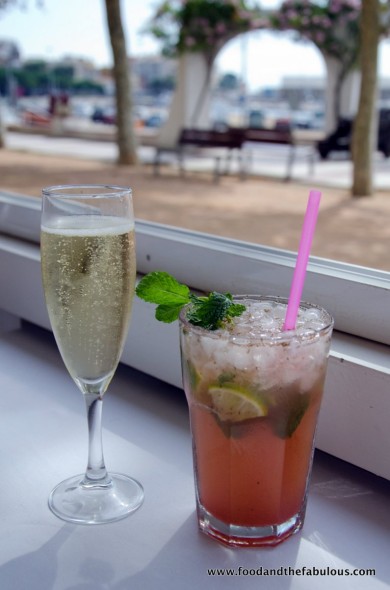 There are several versions of ajoblanco, some use leeks, some use raw garlic, this is my version. Most recipes do not ask you to toast the almonds, I feel lightly toasting them intensifies the nutty flavour. Pass the soup through a sieve two to three times, if you like and serve very cold. The volume will decrease but the soup will be smoother. I like a slightly grainy texture, it reminds me that almonds, the star ingredient, were used.

Ideally, you would use Spanish almonds, which I brought back from Barcelona earlier this year and used in this recipe (they look different to regular almonds). I used regular flaked almonds for the soup – easier to toast and blend than whole almonds. 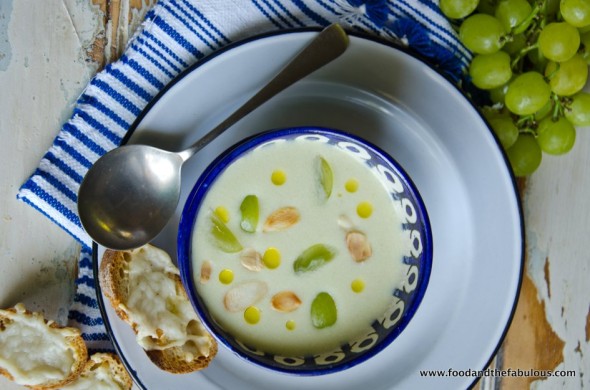 I paired the soup with sourdough baguette toasted in the oven until crispy, with a generous grating of Mediterranean Delicacies’ Dutch goat’s cheese. I discovered this product a few months ago, and when this new collaboration came about, I insisted that I wanted to feature it. It is a hard cheese and perfect shaved in salads, on toast, in pastas and risottos and on a cheese board. One of my very favourite cheeses to date.

salt and white pepper, to taste

8 slices sourdough baguette (or other baguette)

2. In a pot, on medium-low heat add the tablespoon of olive oil and onions. Fry for a minute. Add the garlic and almonds and stir. Do not allow them to catch or burn. When the almonds just start to colour (about 2-3 minutes), remove from heat.

3. Add cubed cucumber, onion and almond mixture and salt. Allow to sit for 20 minutes at least- salt will draw out more water.

4. Add remaining water, vinegar, pepper and olive oil and blend in a processor until smooth. Season.

5. Pass through a sieve 2-3 times. Leave in fridge a few hours or overnight.

6. When ready to serve,  sprinkle slices of baguette with coarsely grated hard goat’s cheese (or Parmesan) and bake in a pre-heated oven at 190 degrees Celsius  for 6-8 minutes or until the bread is brown and crisp. Don’t allow the cheese to burn.

Serve soup cold with sliced grapes and toasted almonds and the goat cheese croutons to dip. It’s so comforting but refreshing at the same time. 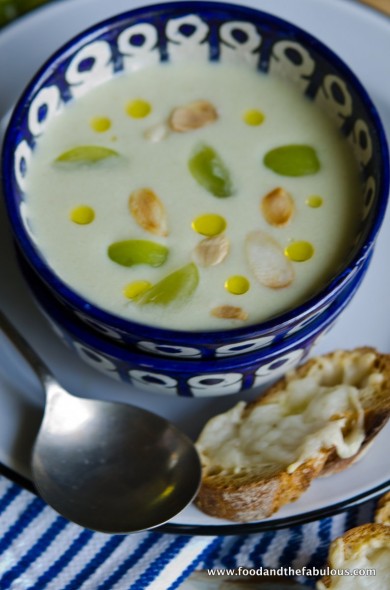 Can you guess where we’re going on the next adventure with Medi Deli? 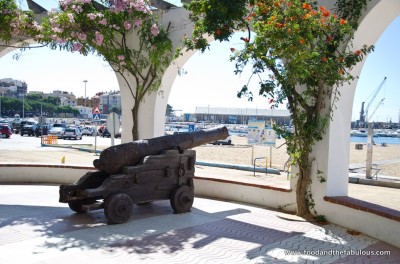 Seafront at the bay in Palamos, Spain