Last night at Cipriani Wall Street, Manhattan, New York welcomed its first World’s 50 Best Restaurant awards, after a 14-year stint in London. William Drew, Group Editor of The World’s 50 Best Restaurants announced that 47 of the 50 restaurant chefs, representing 23 countries across six continents made themselves available to attend, an indication of the awards ceremony’s popularity and importance. The prestigious event, organised by William Reed Media, a highlight in the culinary calendar, hosted a mix of top chefs, international media and gastronomes in the cavernous hall of the ornate former National City Bank building. 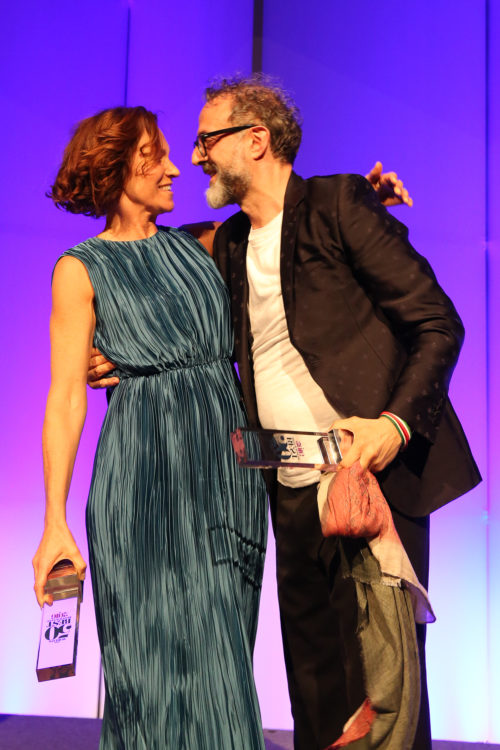 South Africa’s Luke Dale-Roberts of The Test Kitchen in Woodstock, Cape Town continued on an upward trajectory from number 28 last year to number 22 this year, the only African restaurant on the list. Dale-Roberts received an award on stage representing the Best in the Continent. Named “one to watch” in 2013, the chef-owner, who also runs Pot Luck Club at The Old Biscuit Mill in Woodstock, has since expanded to The Saxon Hotel in Johannesburg and co-owns The Shortmarket Club in Cape Town’s CBD (opening 27 June 2016), along with his designer wife Sandalene and head chef Wesley Randles. While Margot Janse’s Tasting Room at Le Quartier Français, Franschhoek, acquired by The Leeu Collection in the last year, has slipped off the top 100 list, Scot Kirton’s La Colombe in picturesque Silvermist Estate has nabbed the number 76 spot. Janse, corresponding from Linthwaite House, part of the Leeu Collection in the U.K’s Lake District, where she is currently consulting, said: “I expected we would slip off the top 100. And it’s okay, but it’s a pity because we have been on it solidly for the past 11 years. This is something I am incredibly proud of.”

On the night, all eyes were fixed firmly on chef patron Massimo Bottura of Osteria Francescana in Modena, in the Emilia Romagna region of Italy. After years spent oscillating within the top three with Denmark’s Noma and El Celler de Can Roca from Girona, on the Catalonian coast, the flamboyant chef, whose dishes embody unique modern interpretations of classic Italian cookery, was crowned number one. “My heart is exploding,” he told media in a packed room immediately after the event, the first Italian restaurant to hold the accolade. Bottura’s cooking philosophy moves away from Italy’s intense nostalgia and obsession with the past, in his words, and looks at culinary traditions critically, rebuilding them.

“Everything has changed around the last 15 years in gastronomy,” he said. Bottura, who holds 3 Michelin stars and is known for his deeply creative nature, has placed Modena on the world’s culinary map in recent years, drawing inspiration from art and music.

“There’s a community, a community created around the 50 best and international congress. We are not here as competitors, we are here as friends,” he said, inviting the crowd to join him and the international contingent of chefs at the after party at Daniel Humm’s famed Eleven Madison Park. “I’m going to DJ with Daniel. This is something amazing, you’ll see,” he said. 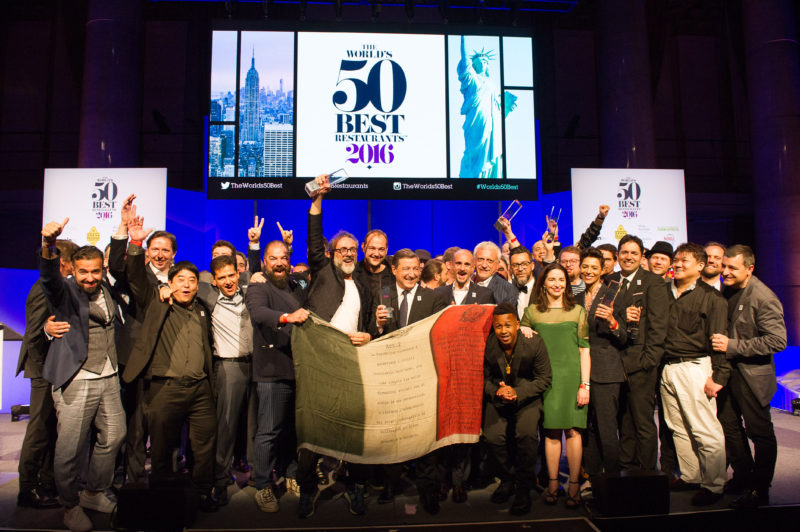 While the camaraderie between chefs appears to be genuine, there’s no denying the boost in business an award like this brings. “Last year, there were more than a thousand queries in two days, something crazy like that,” Dale-Roberts said of the award. “It’s great for team spirit and morale,” he said, explaining that his kitchen teams function like part of his own family. “We’re extremely close. I think staff show you the loyalty and respect you show them,” he said. Dale-Roberts, who cites music as a key inspiration, along with the quality of ingredients he as access to, plans to revamp The Test Kitchen over the month of August, and open a unique theatrical experience featuring sound and a light show in a tactile environment that will call on all of a diners’ senses. And to give more patrons a fair chance of acquiring a table, particularly the locals, Dale-Roberts has since moved to change the reservation system to an online one that opens for a month to the date of a booking.

Dominque Crenn, the only woman in the United States to be awarded two Michelin stars for her Atelier Crenn restaurant in San Francisco was presented with the Best Female Chef award on the night. She implored the audience to consider the tragedy in Orlando (referencing the recent horrific mass shooting in a gay night club) and appealed that we revisit our sense of humanity and responsibility to each other. On a similar note, Bottura was asked his opinion about the current implied obligation placed on chefs to “save the world”. On advising about his plan to open a soup kitchen, with his Food for Soul initiative in the Lapa favela in Rio, Brazil, a space for mindfully using “waste” and unattractive produce while involving the community in art and design, he said: “Culture, consciousness, a sense of responsibility – this should be the mind-set of all modern chefs.” 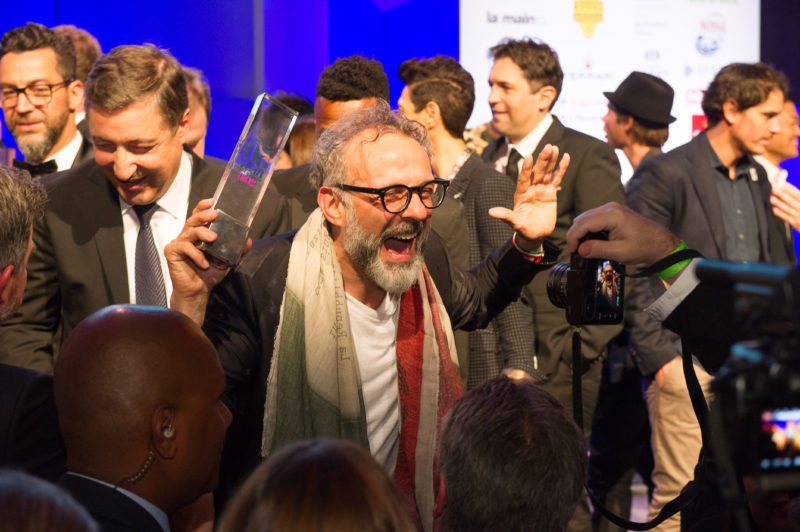 Bottura said he felt that he and his team weren’t ready for the award last year. “This year? We are ready. I don’t like this word “best”. I think the word is influential,” he said, inviting travellers to visit Italy and its rich culinary traditions form north to south.  Regaling the audience with his struggles as a chef over the years, and quoting fellow Modena native Enzo Ferrari, Bottura ended with words of inspiration to young chefs: “If you can dream it, you can do it.”