On 28 April 2018 Slow Food chapters around the world gathered to celebrate the use of sustainable produce, scraps and leftovers, by preparing pots of soup and sharing a meal. This was the third Disco World Soup Day – here’s what went down at the Cape Town gathering.

This weekend I was introduced to a world I never knew existed – Slow Food. A movement that is, in a nutshell, anti-food waste, anti-GMO and anti-poverty. And because 28 April is Disco World Soup Day, the foodies of Cape Town gathered at 4roomed Ekasi, a popular multi-faceted fine dining restaurant in Khayelitsha. 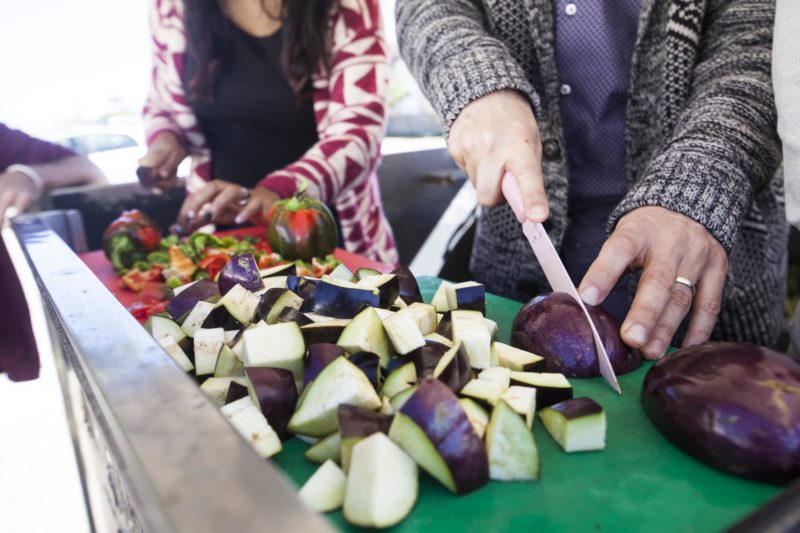 The aim was to cook soup from scraps of food that would otherwise have gone to waste. In a brief chat I had with Indigenous food researcher Loubie Rusch, she told me that the Slow Food events exist to draw attention to food waste, as “currently 60% of our food goes to waste and it is all good food that could be used to abate poverty”. She said although the Slow Food movement is gaining traction it hasn’t always been like that because of the hierarchical structure it had.  There was a hefty joining fee which prevented a lot of people from joining. Now people wishing to join are able to, a minimum of three people can register a community on whatever eco-friendly project they are passionate about.

Waste not, want not 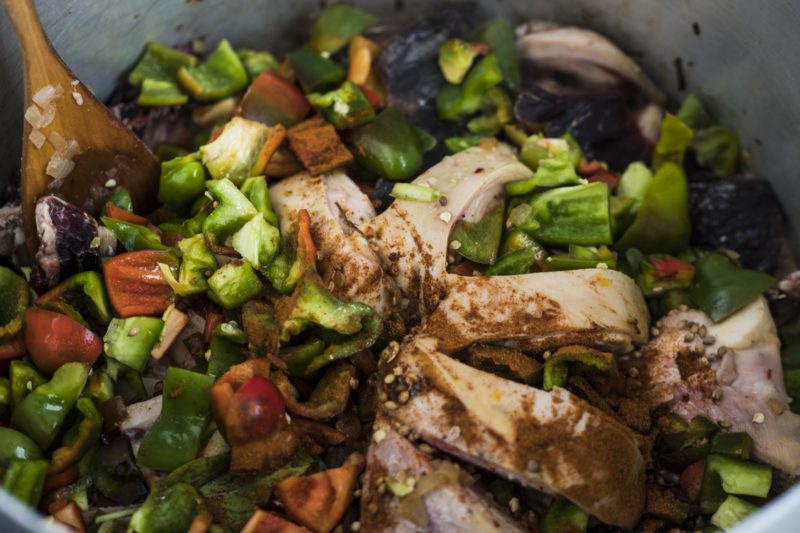 Soup with bones, dry-aged beef and ox trotter from Son of a Butcher; Image: Oliver Petrie

There were two types of soups that were made, one was a beef soup made with beef trotters, and bones. The other was a vegetarian soup, made with fresh vegetables harvested from Ikhaya and Ubuhle Bendalo gardens. Both these gardens are based in Khayelitsha and exist to teach school children and the communities to grow their own food.  The vegetables are also sold at relatively low prices within the community. We were fortunate enough to sample some of their fresh produce, among this were variations of wild spinach: imifino and umsobo leaves.

Seeing these leafy greens catapulted me back to my childhood, growing up in an impoverished village in the Eastern Cape, it is all we ever ate alongside pap and potatoes. I grew up associating these vegetables with poverty, but I must admit after seeing them on the menu in Khayelitsha, my perception of it has since changed. 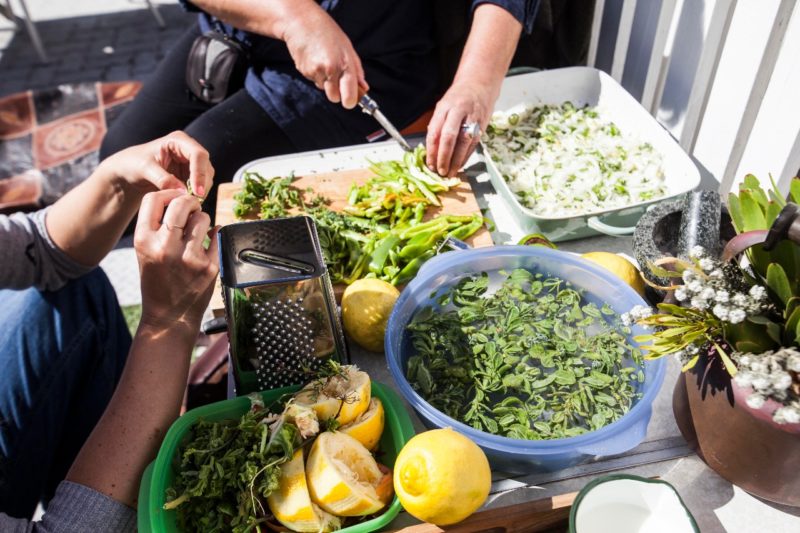 Clean food is the best medicine. Indigenous plants like sout slaai and heerenbone for a lovely side dish; Yandisa Nazo/Ekse Lens.

Apart from the mouth-watering soups we were served, there were a variety of salads on the menu, one that particularly stood out for me was Loubie Rusch’s salad made with indigenous vegetables such as dune spinach and dune celery, topped with heerenbone [loosely translated as gentleman beans]. What made these standout for me is the fact that all of these are in abundance in coastal areas, we see them all the time, but we’re not aware that they are edible. Loubie is tirelessly working on introducing these types of food to supply chains. Moreover, she wants to ensure that when this happens, the vegetation is cultivated in a manner that is restorative to the environment and that the people who live in the communities indigenous food grows are not displaced. 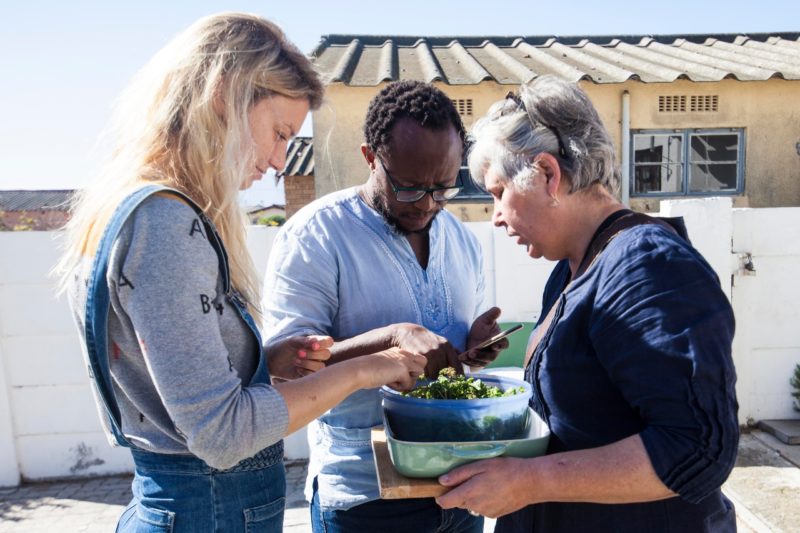 Below, I’ve written a brief description of all the organisations that were represented at the event…

I was fortunate enough to meet Xolisa Bangani who’s a part of Ikhaya garden and the first person to bring Slow Food to Khayelitsha. He has also founded a group called Eat-In, which comprises of chefs and artists from various disciplines. The chefs at Eat-In have to prepare meals that mean something to them, “the story doesn’t have to be deep, it could be a childhood favourite or a cultural meal,” he says. 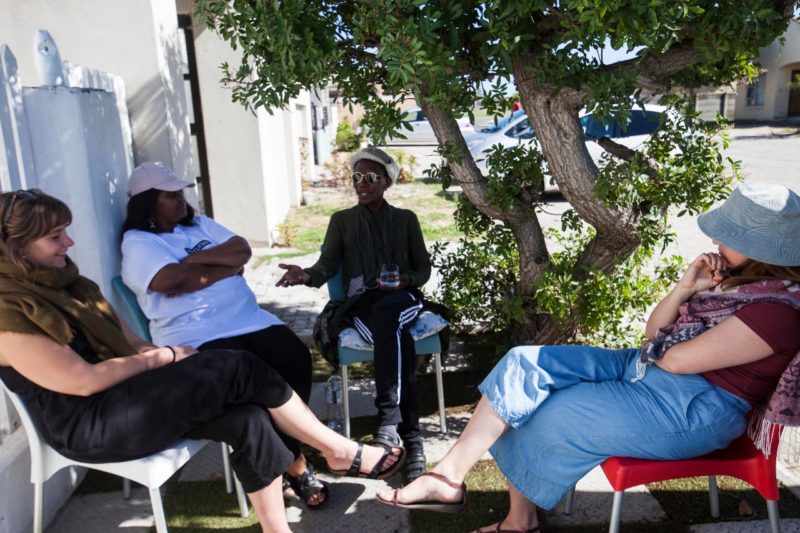 In between mugs of delectable soup and fresh ciabatta, I eventually wandered into Dennis Molewa’s corner. He is a man whose reputation precedes him, and I must admit, I was quite eager to meet him and hear all about a German man who lives in the township. Dennis consults for healthy food brand, Crede in Digital Marketing. When he isn’t, he writes about food. He has also created a network called Linkup South Africa, through this programme he connects students from abroad with social entrepreneurs in Khayelitsha. The purpose of this initiative is to stimulate economic growth in the township. 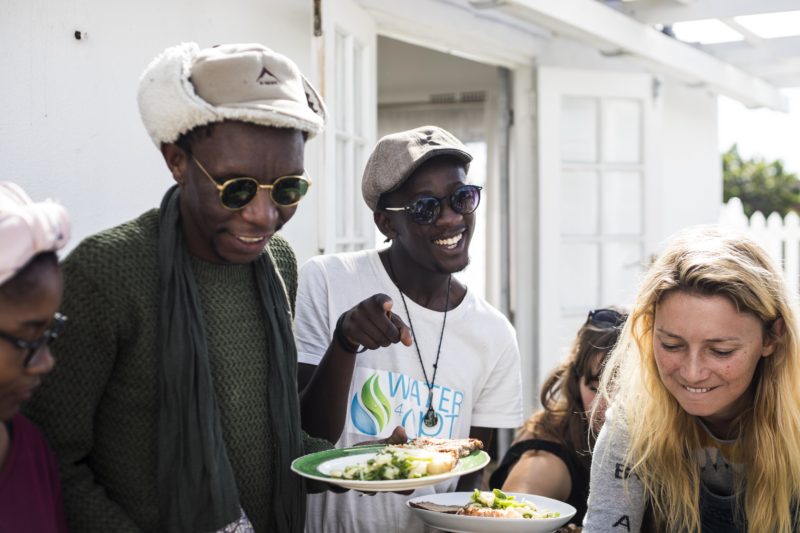 Thrive field worker Zikhona Mdalase shared with us about the work she does. The organisation has five pillars that it believes in: achieve zero waste, local food production, clean water, energy efficiency and a rich bio-diverse environment. These are essential for a healthy community and ecosystem. Part of what she does is removing invasive species that use up most of our water, thus killing indigenous plants.

A thousand words could never fully encapsulate the much-needed change these sustainability communities are making not just on the environment, but the people they uplift along the way. It is a beautiful thing to see, and as we say in my mother tongue – bu buntu – it is humanity. 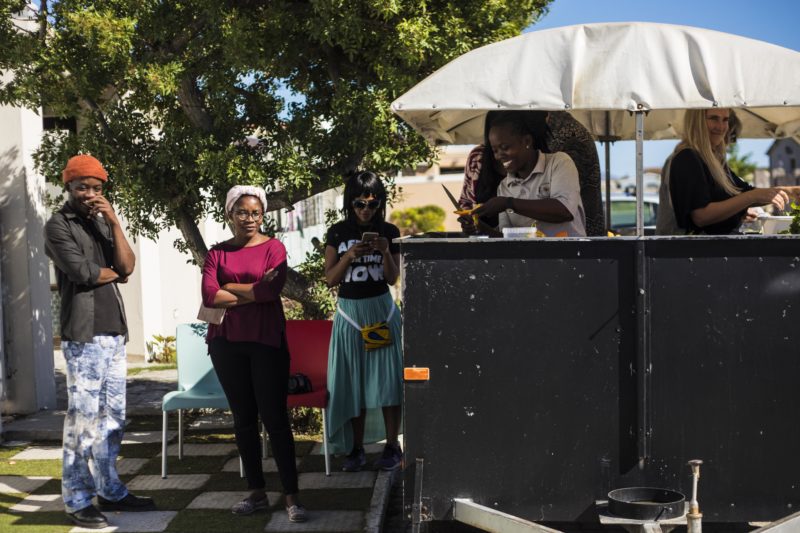