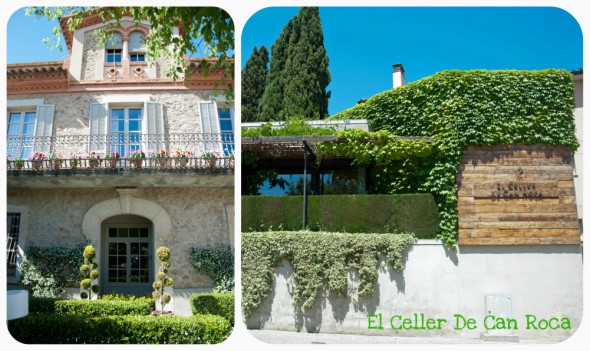 How does one, a mere mortal prepare to dine at what was at that stage recently voted the world’s second best restaurant, a 3-starred Michelin that has been featured prominently in the top 50 for years?

Scour the menu for weeks in advance, put out one’s best frock and practice an all-knowing look?

None of the above. Not in our case.

By the time we got to dine at El Cellar De Can Roca, we had been to a string of Michelin starred restaurants in a whirlwind few weeks in Europe (those posts will appear soon), and to Ferran Adria’s Tickets just the night before. We had not suddenly acquired the well-heeled demeanour of regular gastronomy buffs. In fact, we were just a tad over-exposed to haute cuisine (entirely our faults) and so in we waltzed, after hiring a car to drive the few hours it took to get from Barcelona to Girona on the Costa Brava, our zippers a little trickier to do up than when we left Cape Town. But minds still wide open.

I did not study the menu- I hardly ever look at menus in advance in any detail when we eat out, unless it features in an article or blog post that I come by. This is the one area in life, where I welcome the element of surprise and wonder. I’m willing to make the requisite bookings in advance, read the literature (or watch the youtube vid) on the chefs and their stories, fork out the cash (just about!), but the analysis ends there.

On the road to Girona 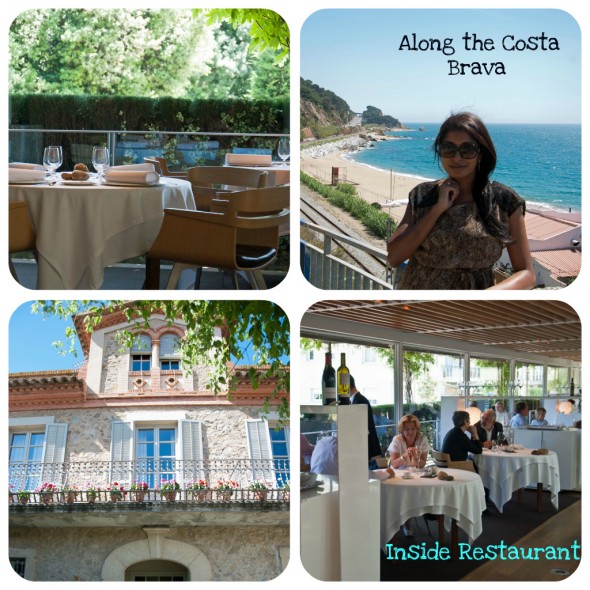 Anyway, a bit about the road along the Costa Brava that very fine day in May. At first I thought we passed idle traffic police seated on white plastic chairs, every so often along the route. We had had a really large celebratory night (our 3rd year wedding anniversary the night before) that ended at 41 Bar at Tickets, so I took a while to realise that seated on these chairs were ladies of the night, out in broad daylight. Fishnets. Red leather (pleather?) mini skirts. The stripper heels. And so I played a game of spotting the next lass sitting on a plastic chair on the side of the road, behind which lay sandy paths that would eventually lead to the beach. Husband wasn’t very amused with my antics.

Who are the Rocas? 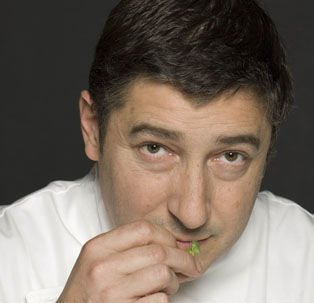 The restaurant is very modestly referred to as a family restaurant, which in fact it is. The three Roca sons Joan (the head chef), Josep (the sommelier) and young Jordi (the pastry chef) all grew up cooking with their mother and running the family restaurant. This restaurant runs through their blood. I’m warmed to note what must be a distinctly Catalan trait of family unity (look, this is a sweeping generalisation), as once again siblings are working together in a family restaurant business. Other notable examples being the now closed el Bulli, Tickets and Cinc Sentis (more on this and Commerç 24, soon)

El Celler De Can Roca operates like a triangle with each of the brothers at a vertex.

The Rocas prepare what they describe as emotional cuisine, this derived from:

I love this video of Joan, explaining the restaurant’s ethos, how he refers to himself as a ‘cook’ and how while ratings and awards are important, they are peripheral in the greater scheme of things.
Did I mention that I spotted Joan and the brothers when I dashed off to the bathroom? Alas, the night before had eaten up all my fan girl bravado and I did not say hello.

El Celler De Can Rocca is a modern looking building on the outside and what appears to be the vestiges of an estate home on the inside, renovated in the style of a greenhouse. I got the distinct impression of fresh Scandinavian influences, with trees outside the glass walls of the building, but still inside, if that makes sense. Light, bright, greenery visible everywhere.

You’re welcomed by suited hosts (well-tailored, modern, not the from-the-hanger-at-the-Edgars-type suits), checked in at what feels like a hotel reception desk and taken to your table. Cava is offered. And was accepted, naturally.

Our big night/morning out precluded us from enjoying any more of the wines, as we had a long drive back immediately after lunch and to pack for departure to Frankfurt. 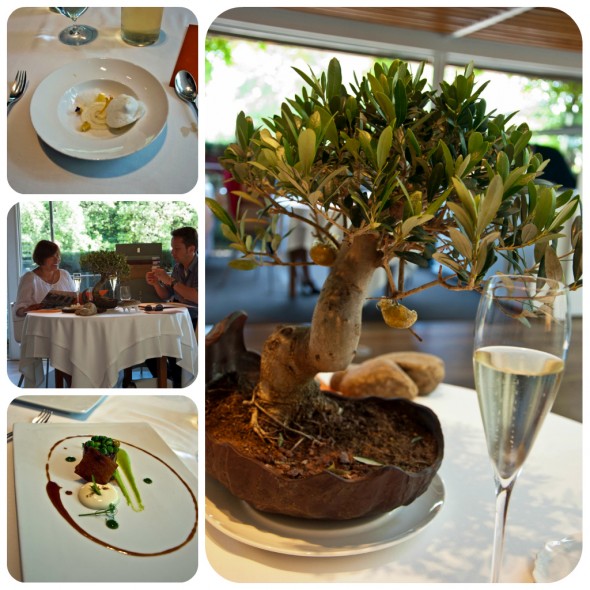 Naturally we opted for the Feast menu, consisting in 9 savoury courses and 2 desserts.

The esperience began with caramelised olives stuffed with anchovies, served hanging from a bonsai tree. A talking point!

El Celler is famous for showcasing the best of Catalonia, so we expected a lot of seafood and fresh flavours and were not disappointed. In fact there was only one red meat course, the sublime steak tartare with mustard ice cream (tiny balls of frozen perfection). This oversimplifies what was on that plate; the full description runs four lines long and is the most complicated dish on the menu. Every morsel sings in tune with the layers that make it complete.

Notably, El Celler are  fond of what seems to be the ‘water balloon’ technique, and the snacks (mushroom bon bon, campari bon bon) as well as the petit fours (chocolate & cocoa bean, vanilla & coconut, peach, honey & rose and melon & orange blossom) all were to be placed quickly in the mouth, ‘exploding’ their fragrant contents. This inspires a child-like wonder in the eater and it’s hard not to smile at both the playfulness and the science involved in preparing them.

The colourology, green in this case is an intense burst of ‘green’ flavours on a plate- apple, mint and lime and served in mid May, displayed the essence of spring to me. 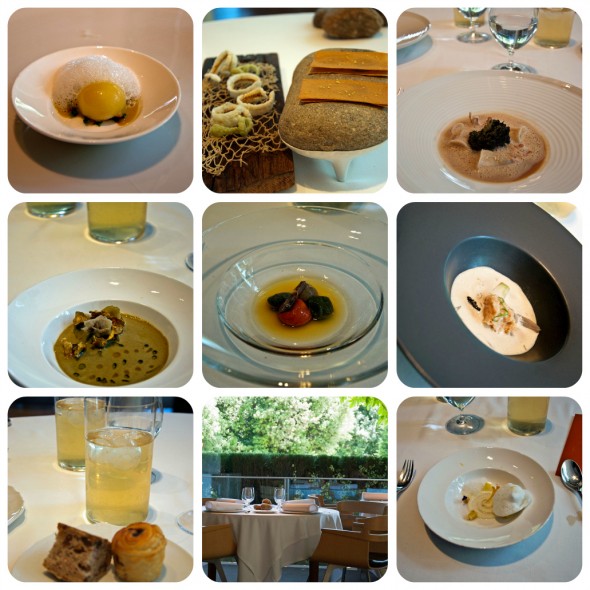 Other exceptional dishes included the red mullet sequet (Catalan seafood stew) and the sole spread across with four stripes of different sauces (those who are adverse to smear cuisine, look away now)  fennel, bergamot (most exciting), orange and a caramelly peanut. Also a candied round of olive oil was served with the dish.

This restaurant is also famous for its perfumes. One course is delivered with a paper cone spritzed in a signature whiff of perfume meant to enhance the dish and your experience of it. The Roca brothers, and Jordi in particular have cheekily invented desserts to celebrate iconic perfumes e.g. Calvin Kelin’s Eternity and a new range of their own perfumes is also available. Had I researched this bit in advance, I would have asked to buy some.

Bookings are done well in advance. There is no booking form on the site, in fact you need to hunt for the email address: restaurant@cellercanroca.com

Kindly note interpretation of the menu and opinions expressed are entirely my own.